The 1st stage of our storm is just about complete. However… we have about 3 or 4 more stages of this storm to push through. This weak and disorganized system is going to bring a lot of uncertainty with it. So lets break this system into pieces to discuss.

The radar loop shows how the first area of moderate to heavy snow is pushing mostly southeast of our area. Areas south of I-84 did get in on some of the heavier snow, and we have seen reports of 1 to 3 inches of snow in parts of Rockland, Westchester, and Putnam counties. But the remainder of the region has anywhere from a dusting to an inch after Stage 1.  This is going to give the impression of a completely busted forecast.  The forecast of 3 to 7 inches is no where near being verified for 75% of the region, mainly anyone north of I-84.  This was not entirely unexpected… although guidance did originally suggest this batch of snow pushed a bit further north before moving out.

This is the futurecast radar of the storm from 1pm to 8pm.  You can see the area of moderate snow pushing out to sea in the first frame at 1pm.  Then as we go through the next 2 or 3 hours, the guidance believes an area of light to moderate snow will fill in on radar across northeast PA and into the Hudson Valley.  This is due to considerable upward motion (vertical velocity) in the mid levels of the atmosphere. 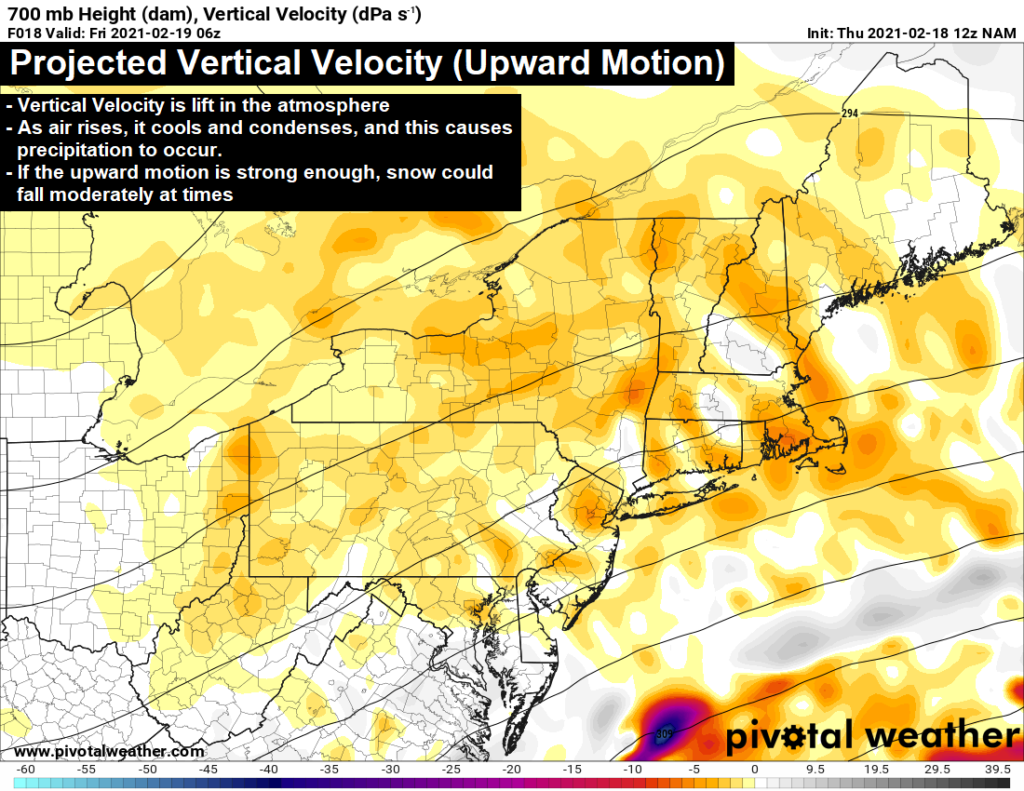 The yellows and oranges indicate fairly good upward motion in the atmosphere, which could cause snow to develop and enhance, even though the radar looks quiet now.  If this is correct… despite the radar indicating that the snow is just about over… we should see the radar begin filling in, and spreading into the Hudson Valley through the afternoon hours.  For this reason, we anticipate periods of light to moderate snow through the afternoon, and into the early evening hours.  Accumulations over this time are likely to be a dusting to an inch or so… maybe an inch and a half in a few spots. 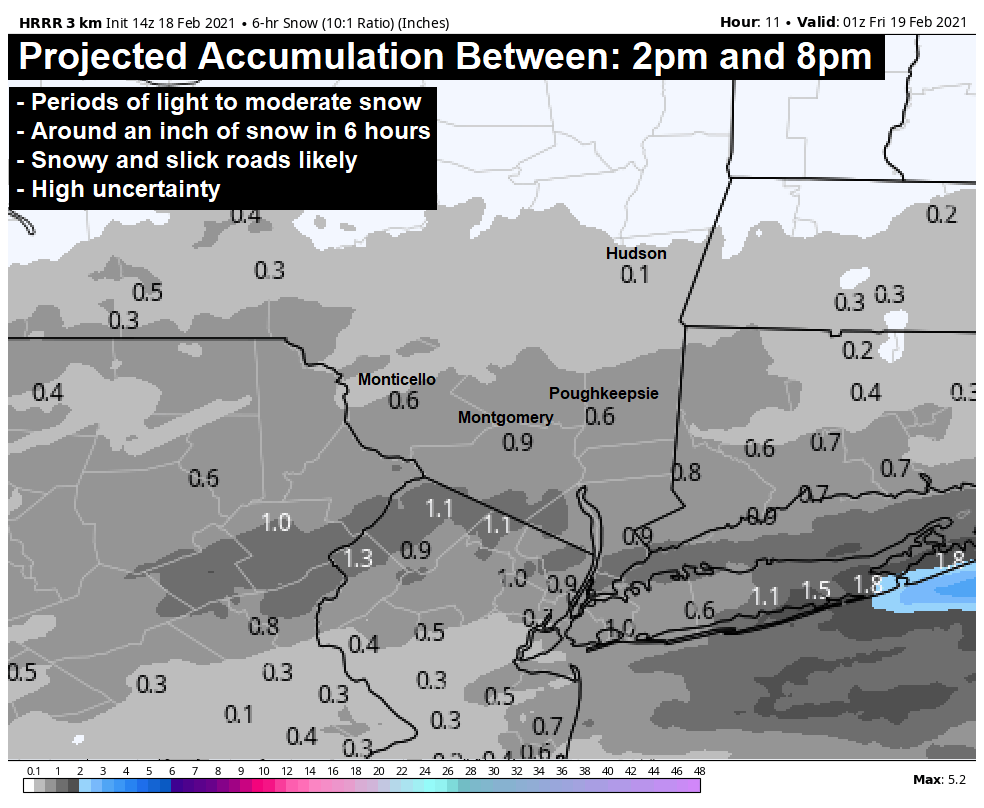 This futurecast simulation from 8pm tonight to 8am on Friday shows repeated periods of on and off light to moderate snow.  The lift in the atmosphere associated with the coastal low pressure appears to be enough to generate repeated areas of steady snow, that will accumulate slowly… but steadily through Thursday night and into Friday morning.  Here is the snowfall map associated with this 12 hour period of time… 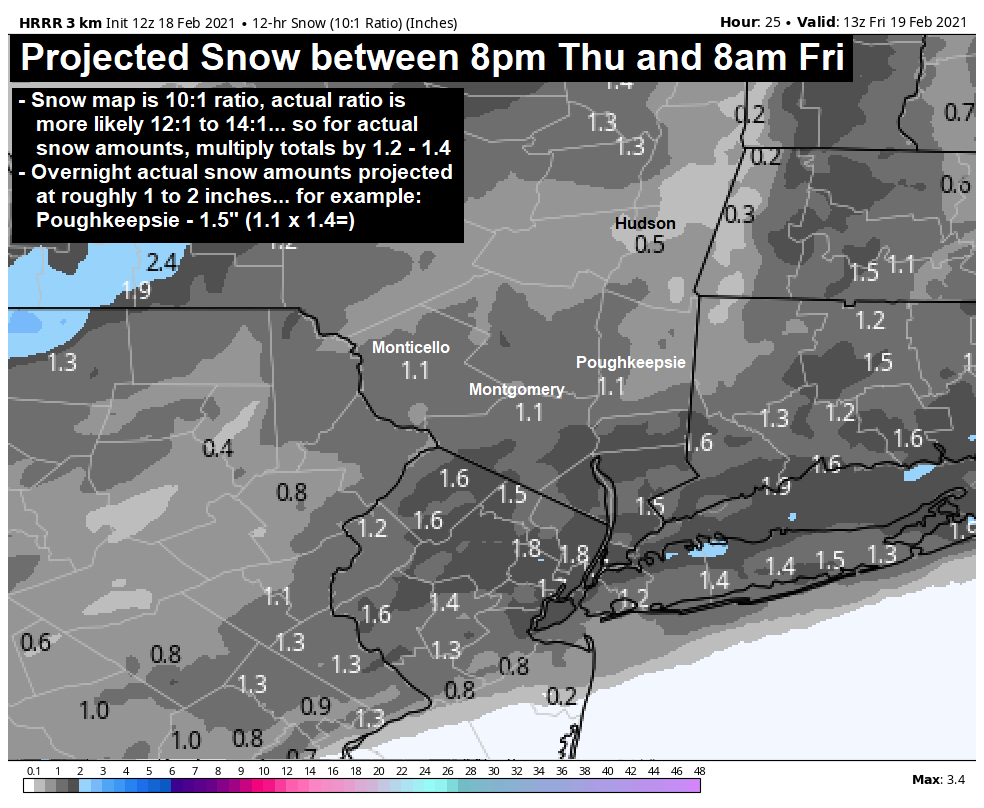 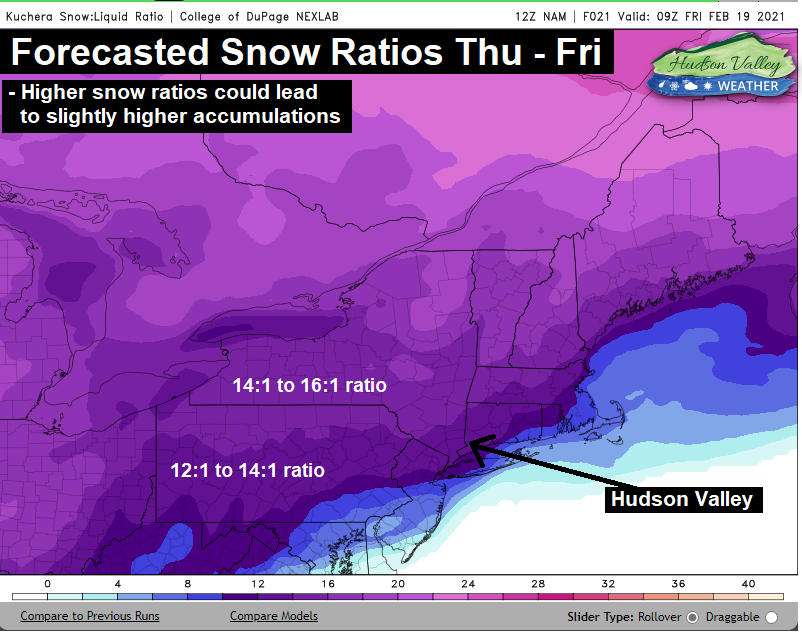 So the overnight snow amounts could be closer to 1.5 inches, possibly even 2 inches in the Hudson Valley.  A very minor difference… but could make a difference when compiled into the total storm.

You see that during the daylight hours on Friday (from 8am to 7pm), that the snow continues to fall around the Hudson Valley.  It may taper off at times, and fall steadily at others… but the snow is clearly in our region through the day on Friday, per the computer guidance.  Once again, these snowfall rates are not very impressive.  Here are the projected snowfall amounts from 8am to 7pm on Friday… 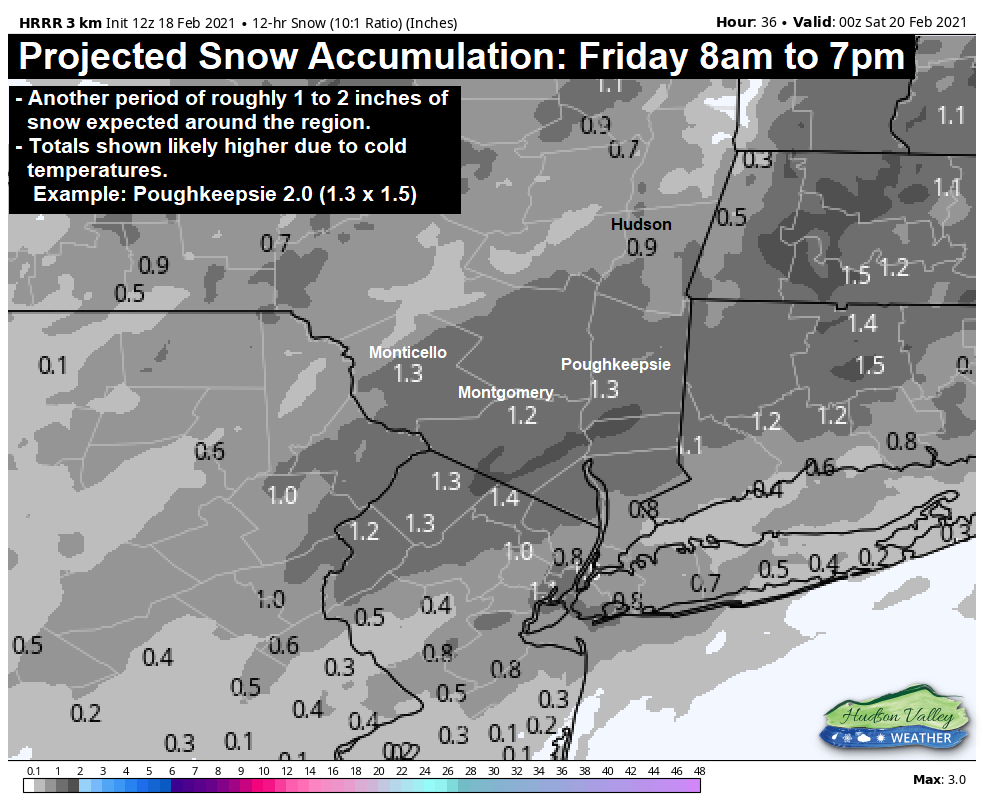 So once again… another 12 hour period of time, where another 1 to 2 inches of snow can fall.  These snow rates are not overly impressive, but the potential for an extended period of time, with persistent and consistent light to moderate snows.  This could add up over time… and by the time all is said and done, not counting what has fallen so far… here is the projected additional snow… after 1pm Thursday… 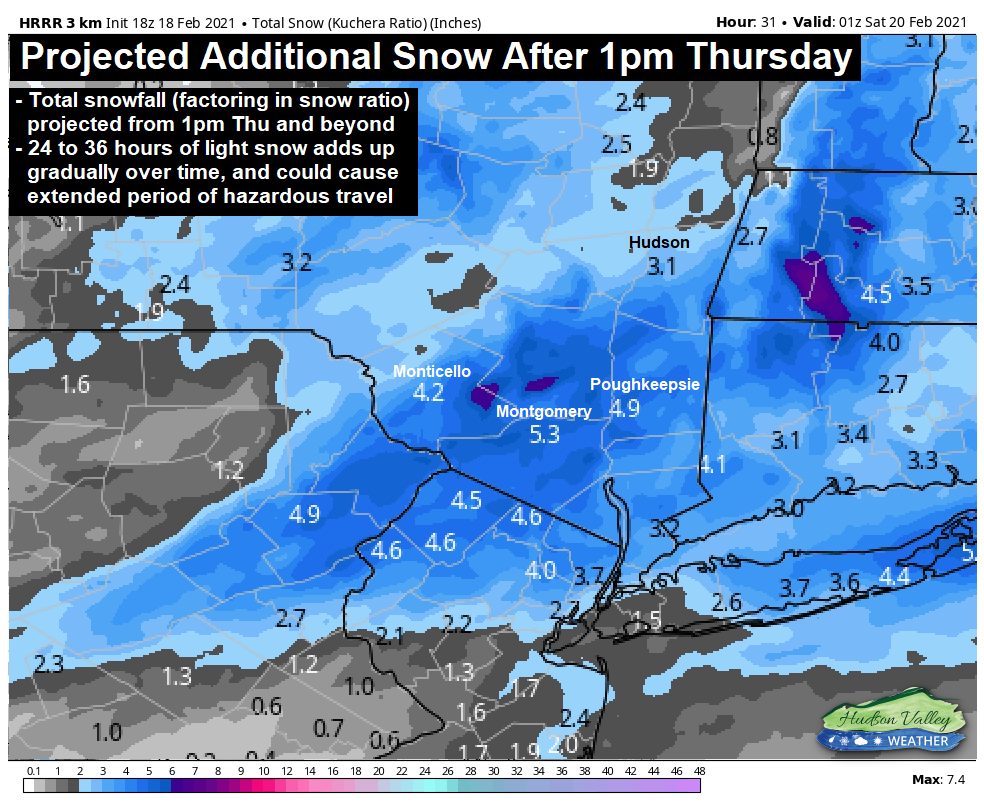 Could this be wrong?  Absolutely!  Any time there is a weak storm system, with an expectation that snow will develop right over top of us, and possibly continue for such an extended period of time… it’s entirely possible that the computer model is wrong about the development of light to moderate snow.  It is equally plausible, that the model does not show enough snow, that the upward motion that is expected is more significant… and the moderate snow becomes heavy at times.  These type of scenarios are very difficult to pinpoint… so we will trust that the model is properly projecting the atmospheric dynamics that will cause snow to develop and enhance over the Hudson Valley for the next 36 hours.

So in conclusion…. “No… this storm is not over.” … and at least for now, this storm is not a bust.  Be sure to anticipate a snowy, and slick Thursday afternoon and evening.  A snowy Thursday overnight… as well as a snowy Friday morning and afternoon, before things finally begin tapering off Friday night.  More updates as necessary.