The days are getting colder, and the nights are featuring frost.  We have even just had our first snowstorm of the early season.  So with the 2018-2019 winter getting closer each day, the thought “what is this winter going to be like?” is growing more and more common across the region.  So that means it must be time for the HVW Winter Outlook.  This has become an annual event, where we combine science with speculation, and try to project the general weather patterns for the coming several months.  We focus on the temperatures and potential snowfall, based on what occurred when conditions were similar in the past.  Hopefully, you’re familiar with our method, but if you’re not… don’t worry, we’ll explain as we go.  So without further delay, lets get into the 2018-2019 HVW Winter Outlook: 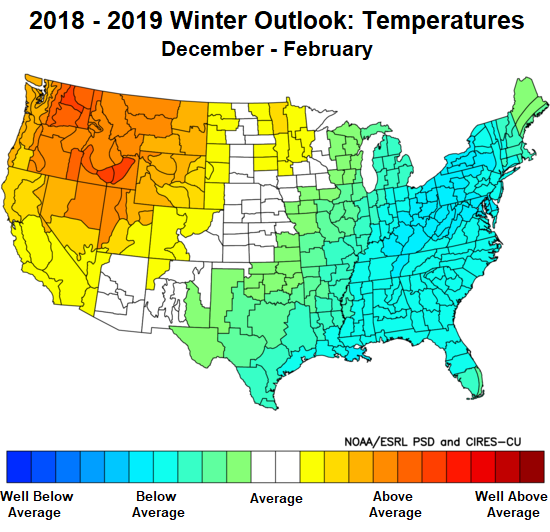 Temperatures this winter are expected to be below average across the Hudson Valley.  We expect a persistent ridge of high pressure has set up across the western US, causing above average temperatures.  The offset to that, has been a persistent dip in the jet stream across the eastern US is likely… which leads to below average temperatures.  Our research suggests the winter could get off to a similar start to recent years, with a near normal December.  However our latest guidance is suggesting December could be colder than average and active.  Then, January is likely to be slightly colder than average, featuring some cold snaps, followed by a thaw or two.  February appears likely to be the coldest month of the winter, with the best chances for snow and sustained cold.  When all is said and done, temperatures are likely to be 0.5 to 2.5 degrees below average. 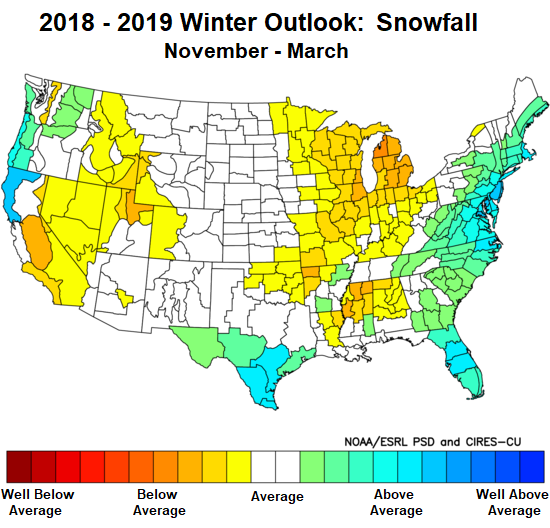 Snowfall this winter appears likely to be above average.  The 26 year average for snowfall in Poughkeepsie is 44.2″.  From first flake to last flake this winter, we expect to see snowfall totals roughly between 50″ and 65″.  The wide range in the forecast is a product of uncertain nor’easter storm tracks.  The reality of snowfall totals, is that luck is certainly a factor.  Patterns can be cold enough to support snow, but then the coastal storm hugs the coast a bit closer than anticipated.  The result can be a forecast of 6 to 12 inches of snow, becoming only 5 inches before mixing with rain.  Even with the variability of storm tracks, on average, we believe snowfall for the season will be above average.  The snowiest month is likely to be February, while December could get of to a slow start in terms of snowfall amounts.

This section may not be for everyone, as we tend to get a bit heavy on the science and details.  Many people just want the basic winter outlook, which is what you’ll find above.  However, if you’re looking for insight into how we arrive at our conclusion, you may find some interesting data below.  Each year, we use roughly the same technique in generating our winter outlook.  We focus on oceanic patters across the globe, with extra emphasis on the tropical Pacific Ocean.  Whether we are in an El Nino or La Nina has significant impact on the outlook.  We also use other data points and techniques… such as: early season Siberian snow cover; Atlantic Ocean tropical storm activity; solar cycles; volcanic activity; etc.

So lets begin with our current sea surface temperature pattern across the globe: 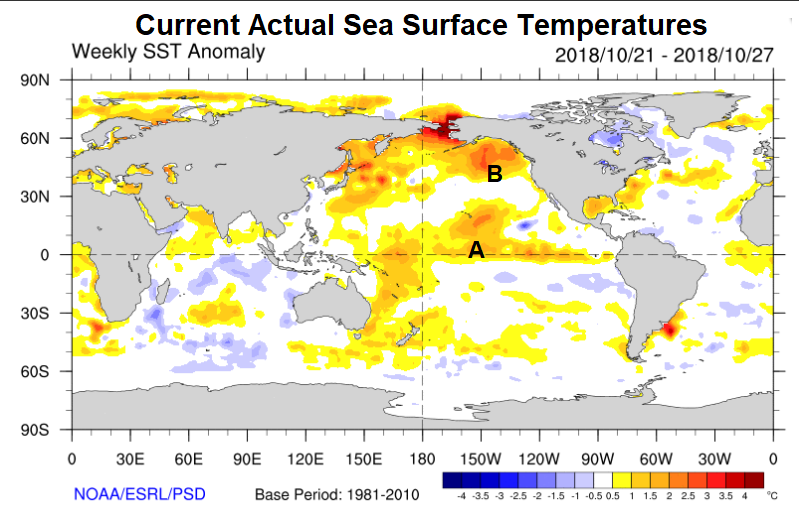 These are the global ocean temperatures compared to average, as of the end of October.  You’ll find the United States in the middle of the top right quadrant (to the right of the letter B).  So we’ve highlighted a couple areas which we will use for the rest of this section:

We have highlighted these areas, because the ocean also has influence over favoring higher or lower than normal pressures, depending on where the waters are warmer or colder.  Now lets look at the projected sea surface temperatures (SSTs) from the European and American (CFSv2) models for this winter (December, January, February): 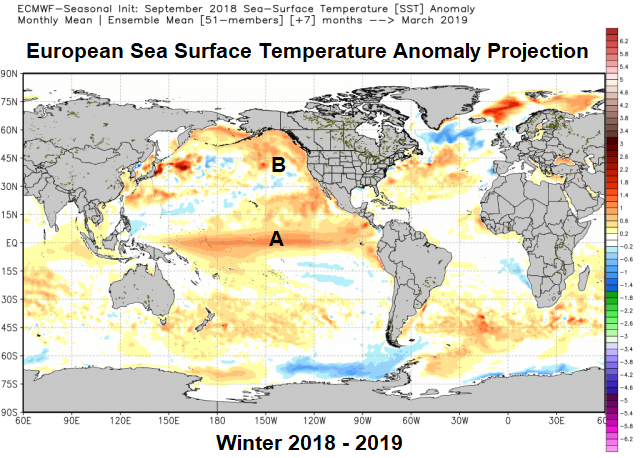 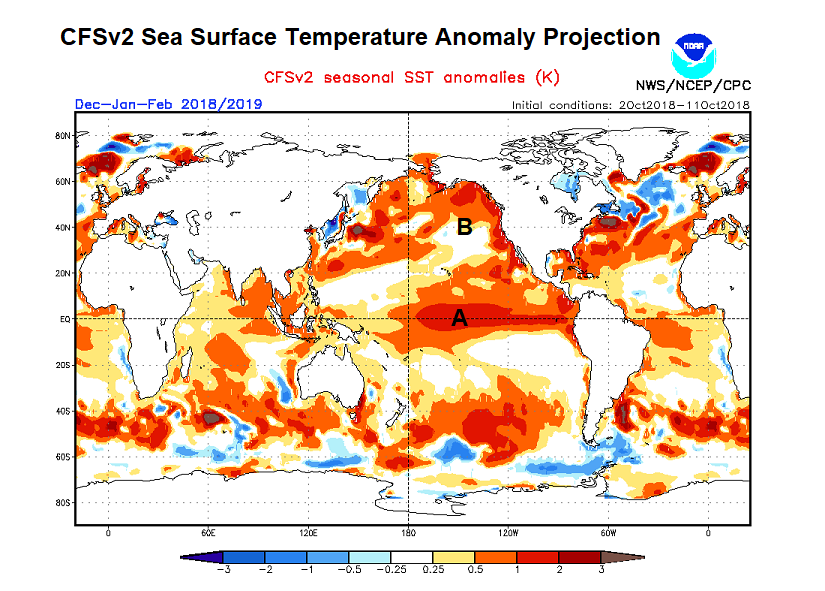 You’ll notice that both computer model projections yield similar results.  If you look at location “A”, both models are projecting a weak el nino, with quite warm waters in the Tropical Pacific Ocean.  Location “B” suggests very warm waters close to Alaska and Canada, with cooler waters slightly further SW toward Hawaii.

So next, we went through the databases, and looked at every winter since 1950.  We isolated the winters that were most in line with the projected sea surface trends for the coming winter.  When we combined them together, we get this projected SST map: 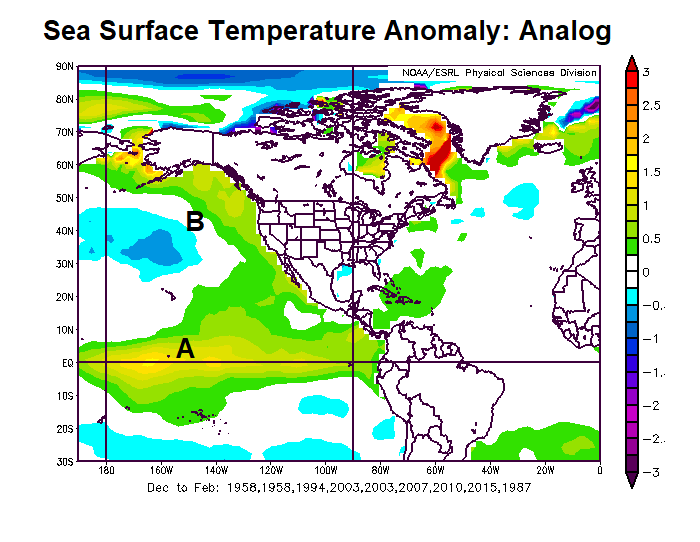 If you compare our analog map of similar winters, you can’t help but notice the similarities to the computer model projections.  The Tropical Pacific Ocean “A”, displays a weak el nino, with wide sweeping warmer than average waters… all the way from the date line (180°W) to the South American coast.  In addition, the Northern Pacific Ocean “B”, is also very similar.  The waters off the coast of North America are quite warm, with slightly cooler waters expected pushing back toward Hawaii.  Here is the generalized 500mb jet stream pattern that unfolds when the oceanic pattern sets up as projected… 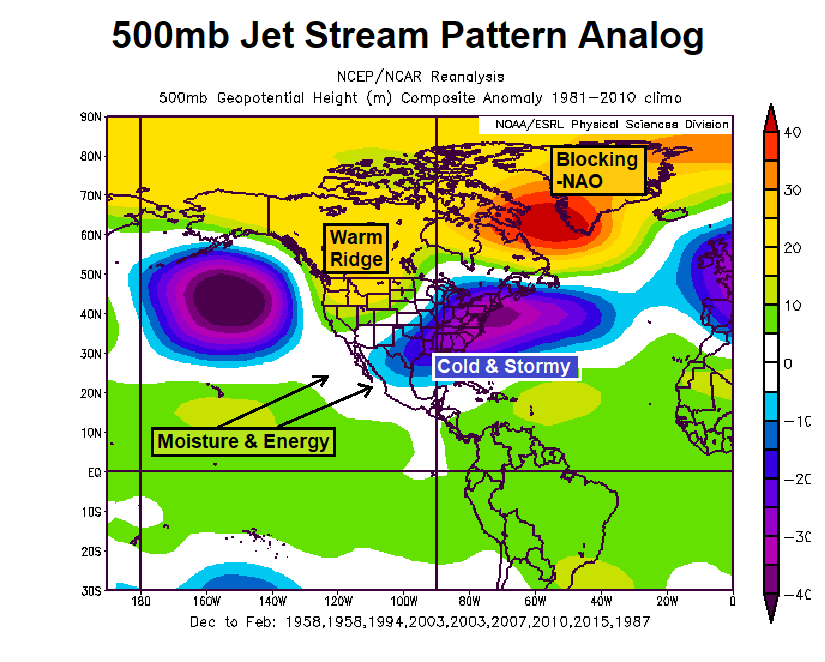 In similar years, a persistent upper level low pressure sets up north of Hawaii, which is reflexive of the cooler water temps in that region.  There is a responsive ridge of high pressure that develops over the NW US and Canada.  That ridge is responsible for above average temperatures consistent in winters like the one we are projecting.  Then downstream, over the eastern US, a persistent trough is likely.  That should translate into colder than normal temperatures, as well as a more active storm pattern than normal.  And Lastly, a strong area of high pressure develops over Greenland, thanks to a very strong negative North Atlantic Oscillation (-NAO).  This is a key feature with regard to the development, and track of nor’easters.  This pattern would be very favorable for an above average snow season.

Utilizing the ENSO and the Sea-Surface Temperature patterns that are in place, we develop the base forecast discussed above for the winter.   We have tested this methodology in previous winters, and it does give us a good starting point for analyzing the winter.  The projected winter pattern is quite similar to the current actual SST pattern… so then, let us test the method by looking at October, and see how the SST forecast analog for October compares to the actual October temperatures… 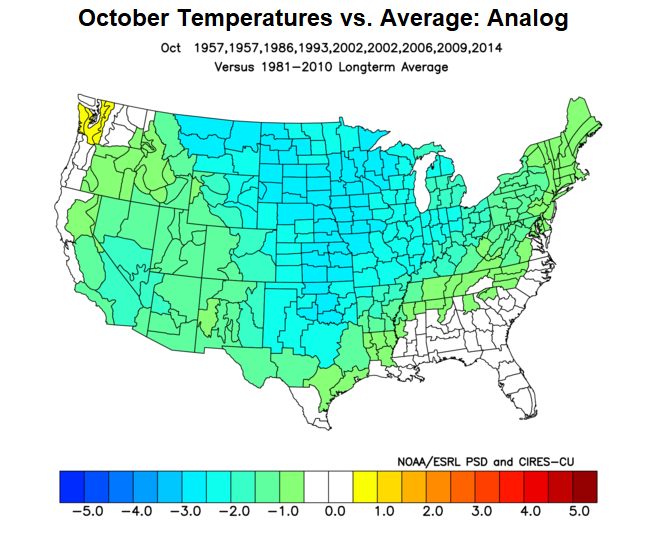 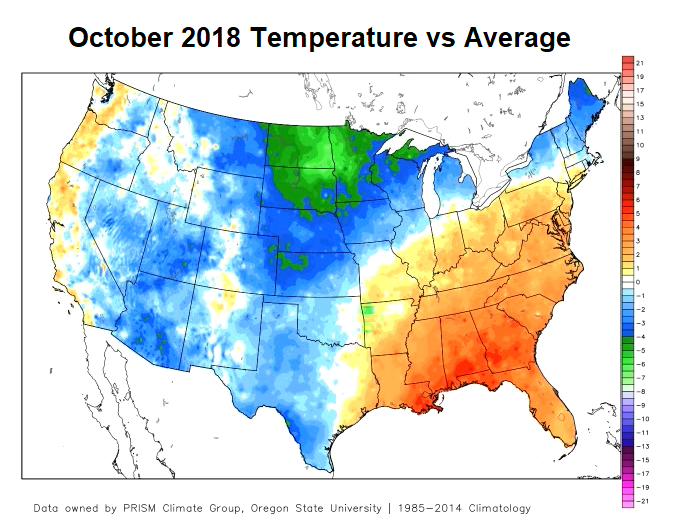 While it is not exact (these type of long range projections rarely are), the analog and the actual are quite similar.  When comparing the actual to the analog… the actual temperatures along the eastern US are generally warmer.  But it’s not the precision details we utilize when comparing legitimacy of the forecast method.  Keep in mind, we are using a generalized pattern over multiple months, to project patterns for the upcoming winter.  So rather than notice that the SE is warmer than modeled… lets focus on the general patterns in the analog and the actual.

Both the forecast October and the actual October were near or below average for most of the country.  The only warmth is found in the southeast, with the actual warmer in the SE than the forecast.  In addition, the warmth extends over a bit further NW, covering more area in the actual result.  A few of the details are different… but the overriding pattern is similar.   So it’s not a stretch to believe that the methodology used for the winter outlook holds merit.  However, should these factors change… and the pattern not unfold as expected… it would have major ramifications for the accuracy of the outlook.  Something to keep in mind, when taking the outlook into account.

We’ve already had our first snow of the season, quite a powerful punch for most of the region.  So the 18-19 Winter season isn’t looking so far away any longer.  The question is, what happens from here.  Does the winter moderate a bit, and give us a near normal… or even above average temperatures this winter?  Or does the winter play out like we expect… which means that our mid-November nor’easter was only a taste of what’s to come.  We’ll soon find out soon enough.  No matter what happens, we’ll be here with you the entire way.  We’ll forecast the coming winter, and focus on each and every storm… to give you the best information possible.  So you can make informed decisions, and stay one step ahead of the weather.  Thank you for reading our 18-19 HVW Winter Outlook… and thank you for supporting Hudson Valley Weather.