Skip to content Skip to content
Rain showers Sunday night will lift north by Monday morning, which will give us decent weather for our Monday in the Hudson Valley. However, a coastal low pressure will move up the coast Monday night, and bring a soaking rainfall to the Hudson Valley. As such a flash flood watch is in effect from I-84 on south, and may be expanded further north. 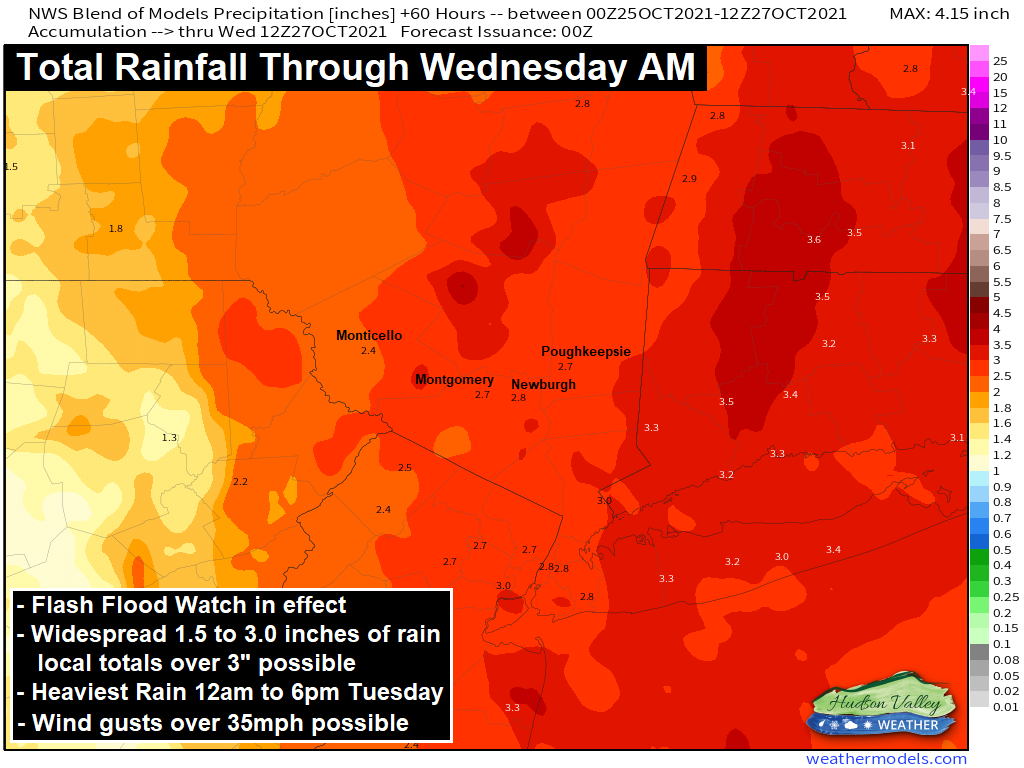 Preliminary Summary:
– Showers develop before midnight Monday night
– Steady rain develops after midnight, continues into Tuesday, falling heavy at times.
– Increasing NE winds after sunrise Tuesday, 10 to 20mph, with gusts over 35mph possible.
– Total rainfall 1.5 to 3.0 inches possible, with local rainfall totals up to 5″ possible.
Late Monday night and Tuesday are looking quite stormy. We’ll have more thoughts on Monday, as the details become more clear. While it is rain and wind, as a coastal storm the details of the track can be quite tricky. And the exact track will determine just how much rain and wind we see in the Hudson Valley. Monday’s weather looks warm and quiet, so we hope you have a good start to the week. More updates on Monday. 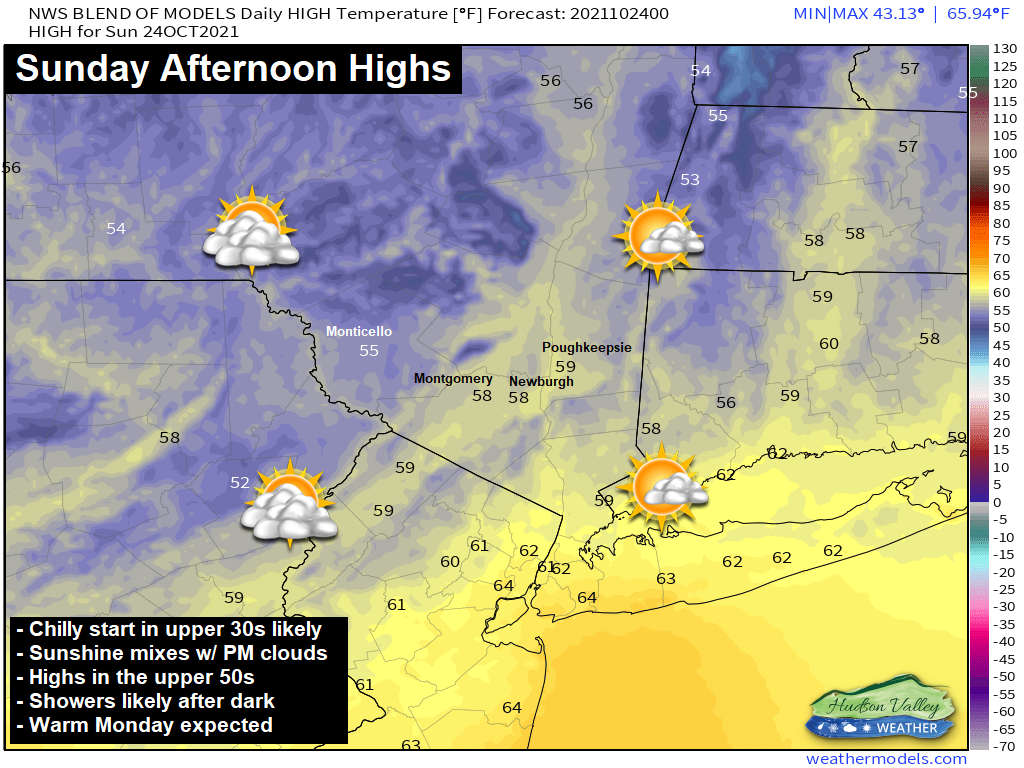 A chilly and in some isolated cases… a frosty start is likely on Sunday. Lows in the upper 30s to near 40° are expected around the valley, and even a few degrees colder in the usual hill towns. The sunshine will help lift temps into the mid and upper 50s by noon. During the afternoon we’ll see increasing clouds, ahead of a warm front that will bring showers to the region after dark on Sunday. That warm front will lift north for Monday, and give us warm temps in the upper 60s along with some breaks of sun for Monday afternoon. A storm system will move in Monday night and bring a soaking rain to the Hudson Valley Monday night into Tuesday.
Enjoy your Sunday!

Saturday saw temperatures in the mid to upper 70s around the valley.  The cold front pulled through with downpours and T-Storms, and behind it some much cooler air has settled into the Hudson Valley. 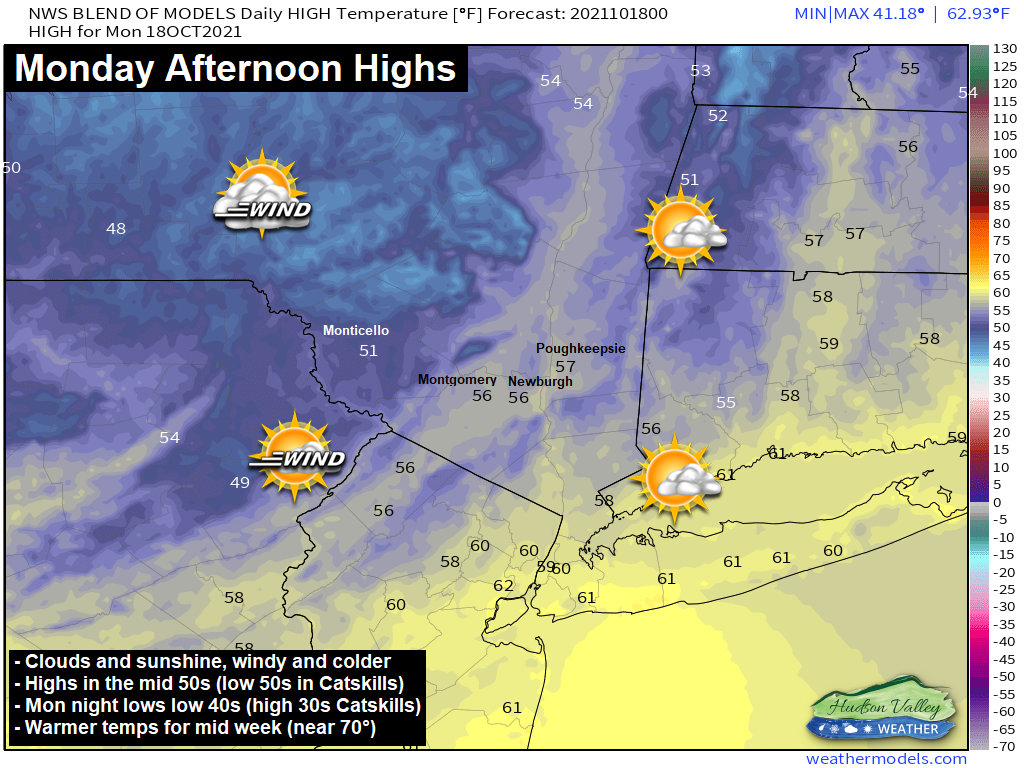 Monday we’ll see a continuation of the fall preview.  Temps in the morning on Monday will be in the low to mid 40s, making for one of the coolest mornings of the season so far.  A NW wind at 10 to 20mph will bring reinforcing cold air into the region.  So despite a mix of clouds and sunshine, afternoon highs on Monday are likely to only reach the mid 50s, which is about 5 degrees below average for mid October.  That will set the stage for a chilly Monday night and Tuesday morning, with partly cloudy skies and a NW breeze will bring lows around 40° in many parts of the valley… with some upper 30s in the Catskills and traditional colder hill towns.

As we head toward mid week, we’ll see winds shift around to the west/southwest, and bring warmer temps to the valley by Tuesday and Wednesday.  By midweek, we’ll see highs around 70°, back up above average for this time of year.  Then by late week (late Thursday/early Friday), we’ll see another cold front push through ushering in another cold shot for next weekend.

Some ups and downs coming our way over the next week, as we begin to settle in to some autumn weather across the Hudson Valley.  Have a great start to your week!

After a weekend of gray skies and patchy drizzle… we should finally begin pushing the low clouds out of the region. 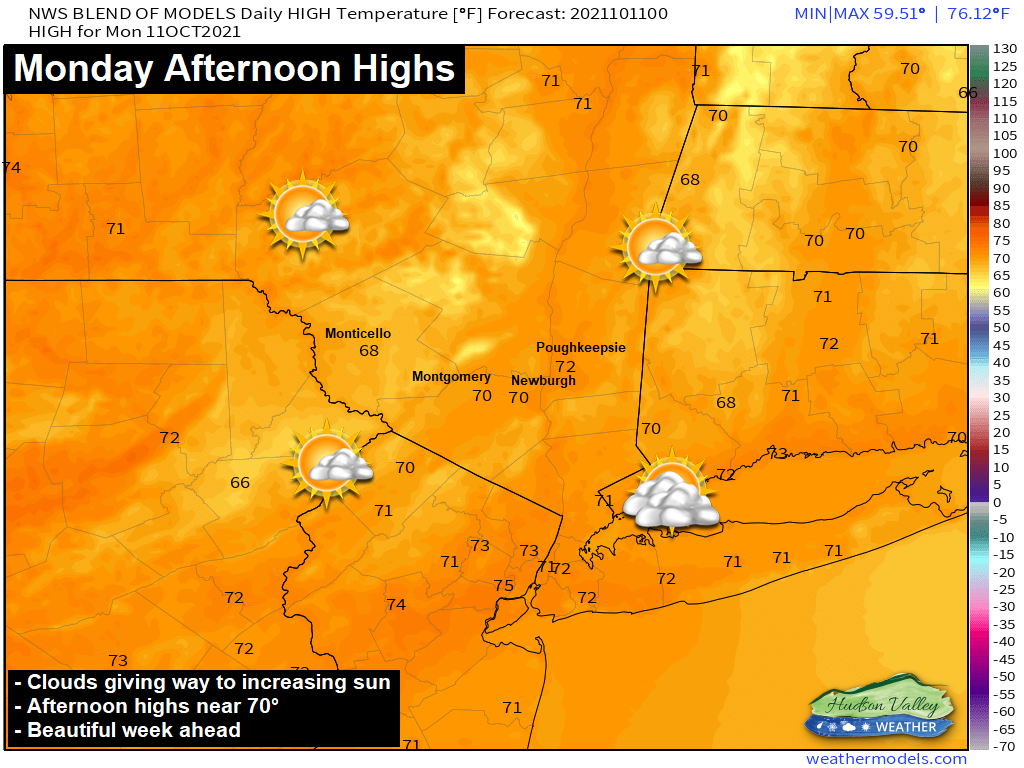 Clouds will mix with increasing sunshine through the day on Monday, as a stubborn upper level low finally begins to exit out to sea.  Afternoon highs will climb up near 70 degrees in the valley, which is several degrees above average for this time of year.  This should begin a great stretch of weather in the Hudson Valley this week.  Tuesday, Wednesday and even Thursday look likely to see partly cloudy skies, with afternoon temps in the 70s.  With several days of nice weather lined up, outdoor plans across the Hudson Valley should be in good shape until at least late week… when a cold front may approach for the weekend.  But we’ll keep our eye on that as we get closer.

Have a great start to the week!

Saturday was unsettled, but not too terrible in the end… Sunday looks similar in many ways. 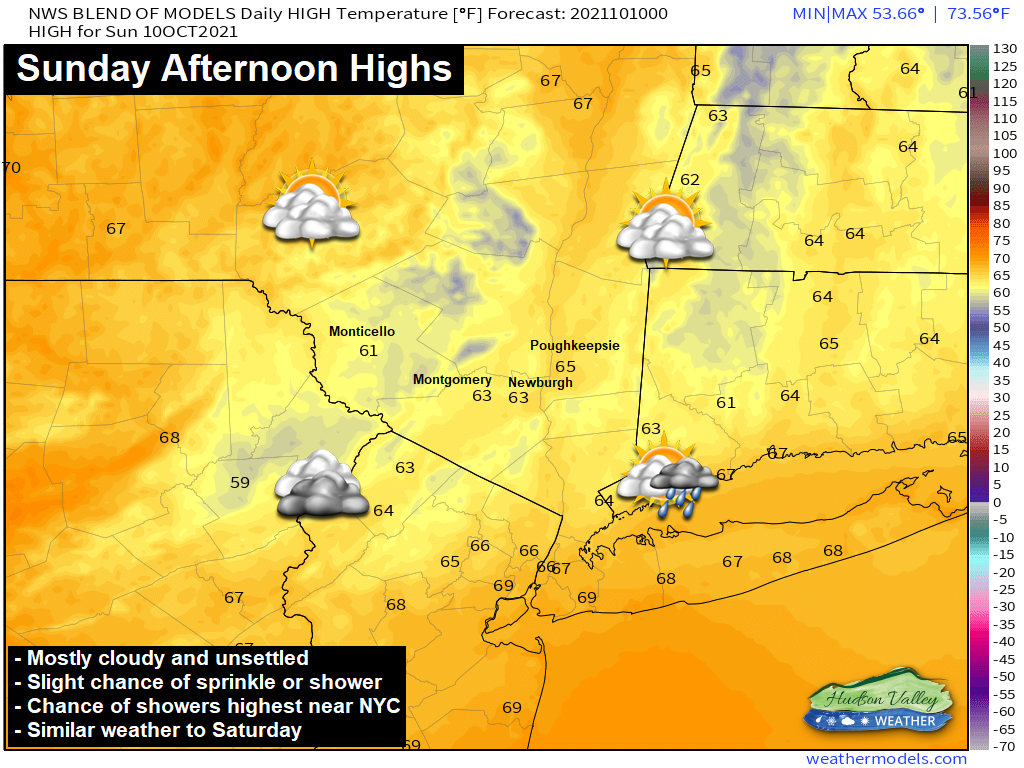 A weak low pressure off the South Carolina coast and a weak high pressure off the New England coast are combining to give us a flow off the ocean that is unsettled… and have been keeping us unsettled for days.  Low clouds will be with us through the morning on Sunday, and we’ll watch as showers pass by very close to the Hudson Valley

Futurecast Radar : 8am to 8pm Sunday

It looks like the majority of us stay dry on Sunday, with the best chance of a shower or sprinkle being further south and east.  Highs in the region should be in the mid 60s due to the unsettled weather around the region.  However, on the futurecast you can also see some breaks in the clouds during the afternoon over the Catskills and upper HV.  That means our northern and western most areas could see breaks of sun during the afternoon… making for a fairly nice afternoon.  In the end… the best bet for our Sunday weather, is that it will look similar in many ways to what we saw on Saturday across the Hudson Valley.

Once we get into the work week, conditions really improve, and sunshine returns to the region… along with temperatures a solid 10 degrees above average.  So hopefully everyone can take advantage of some nice weather this week.  Have a great Sunday!

The Hudson Valley is currently on the edge of the influence of an upper level low pressure over the southeast US. That is translating into low clouds, patchy fog and spotty drizzle around the region. The unsettled and damp conditions are keeping temperatures in the upper 50s and low 60s as of mid day on Wednesday. 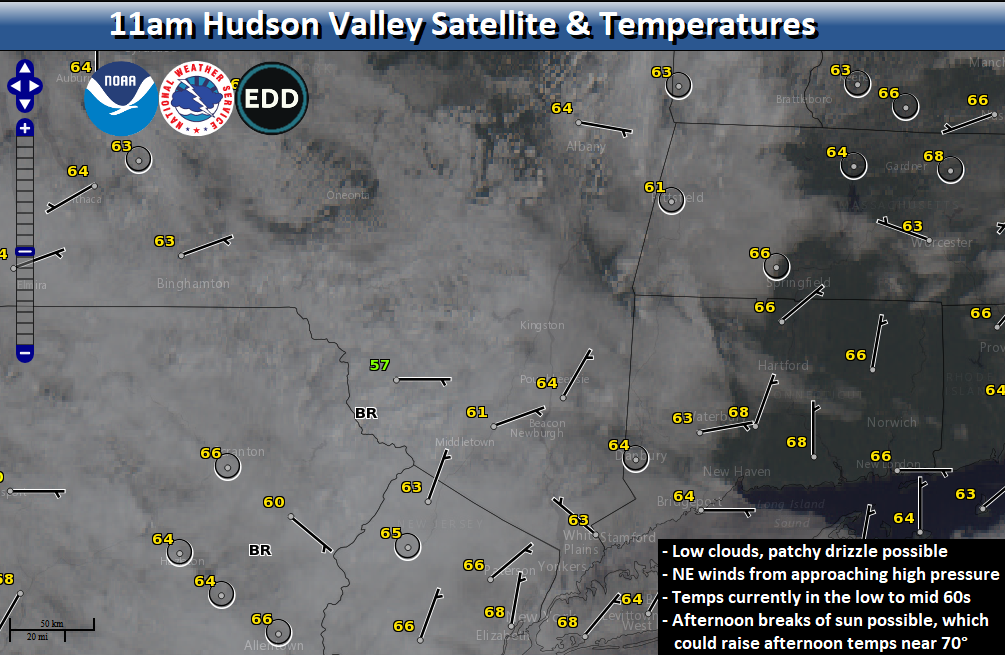 However, a building ridge of high pressure over eastern Canada is trying to push into New England, which should begin to push the clouds and patchy drizzle south of our region. This should mean gradually improving conditions this afternoon around the area. Clouds should begin to mix with breaks of sun, especially in the northern and eastern parts of the area. With the expected breaks of sun, would come temperatures climbing near 70°. However if the clouds persist through the afternoon, temps would remain in the low to mid 60s.
The good news is that by Thursday, the high pressure should win out, and we should see partly cloudy skies with temperatures climbing into the low 70s. A potentially beautiful (fingers crossed) day on Thursday… and those nice conditions could extend into Friday. As far as the weekend is concerned, we’ll have to keep tabs on the situation as it develops. The high pressure ridge will lift into northeast Canada, and we could see the clouds move back into the region. Updated forecast ideas can be found on our website www.hudsonvalleyweather.com
So don’t let the gray get you down, we’ll try and shake off these clouds this afternoon. We hope everyone has a great Wednesday afternoon.
Monday: Mainly cloudy and unsettled… with periods of rain showers. High 60° to 65°.
Monday Night: Cloudy skies with evening rain showers, tapering off after midnight. Low in the mid 50s.
Tuesday: Mostly cloudy skies… with breaks of afternoon sun. High 60° to 65°.
Radar Loop : 9:50am to 11:10am

A damp and unsettled start to the work week in the Hudson Valley. You can see on the latest 90 minute radar loop, some scattered showers developing over our region, with an area of steadier, heavier showers off to our west in east/central PA. Those showers will be pushing eastward over the next few hours. That will likely bring a period of steady rain into the Hudson Valley from the mid afternoon into the evening hours.
Futurecast Radar : 12pm Monday to 6am Tuesday

Temperatures this afternoon are likely to be in the low to mid 60s… before temps fall into the 50s tonight with a northeast wind. The rain showers should taper off after midnight, but the clouds will hold on into Tuesday. But thanks to the northeast wind from the approaching Canadian high pressure… we should see increasing breaks of sunshine during the afternoon on Tuesday.
But for the next 12 to 18 hours… expect the potential for rain showers in the region. Keep the umbrella handy, and have a great afternoon!
Upper level low pressure systems are always lots of fun. The energy associated with them is notoriously difficult for computer guidance to account for. Today is a great example of that.
Current Radar Loop as of 10:40am 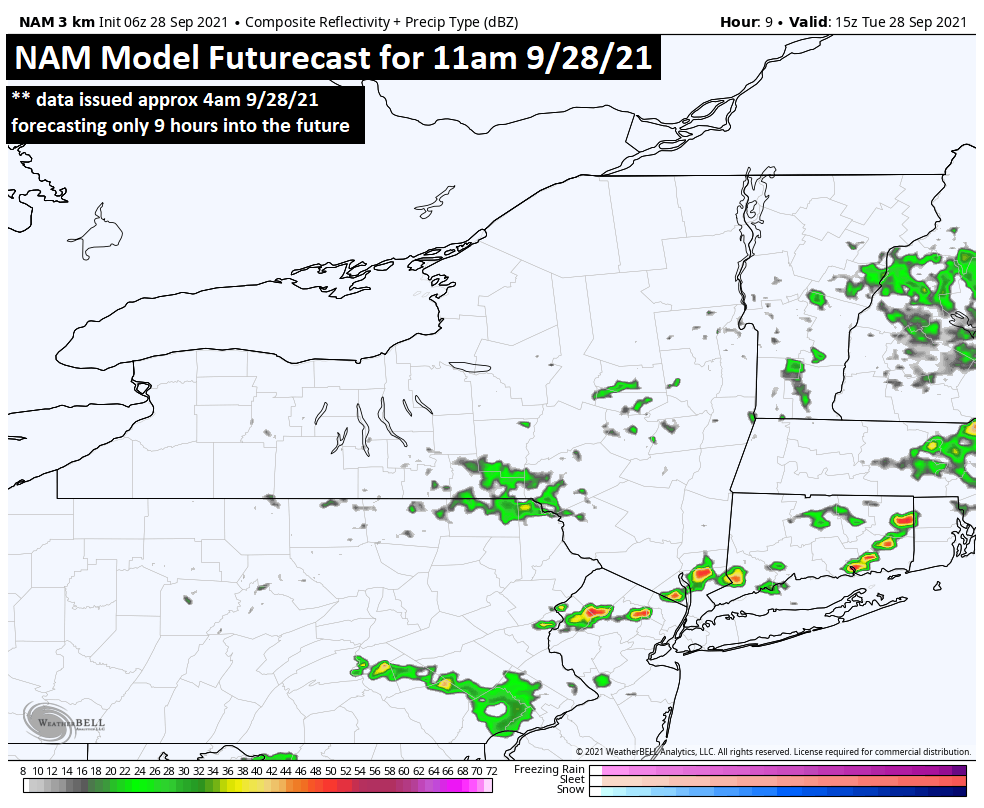 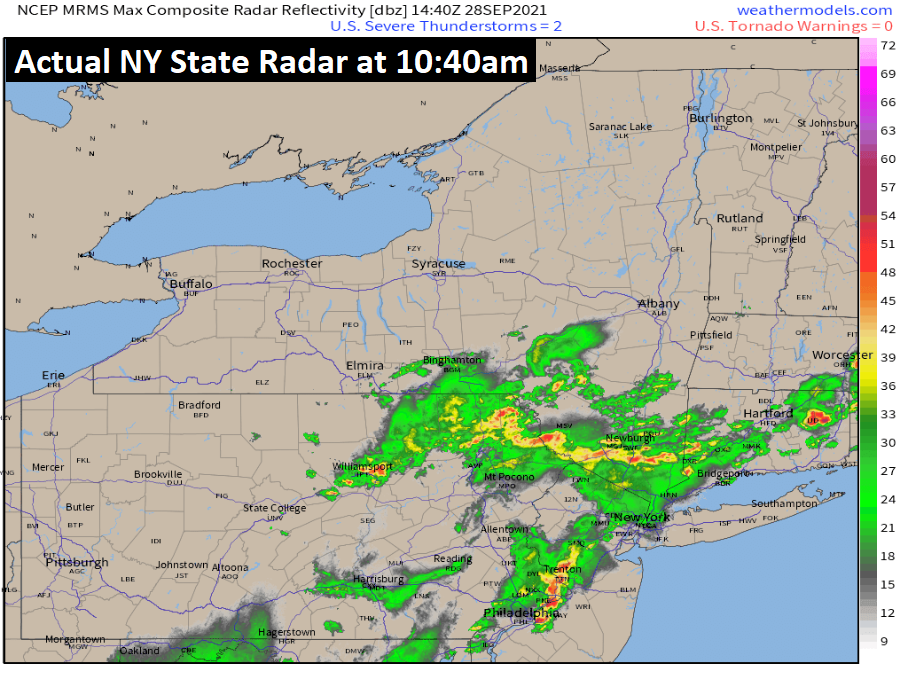 Regardless, please plan for the threat of showers and thunderstorms through at least the early to mid afternoon hours.
We’ve reached the first weekend of Fall in the Hudson Valley, and the weather is looking beautiful for any early fall activities around the region. Saturday afternoon is seeing mostly sunny skies with temps in the low 70s, right on target with the averages for this time of year. Tonight, temps will fall into the low 50s for lows under partly to mostly cloudy skies. Setting the stage for partly cloudy skies and afternoon highs in the upper 60s to near 70°. 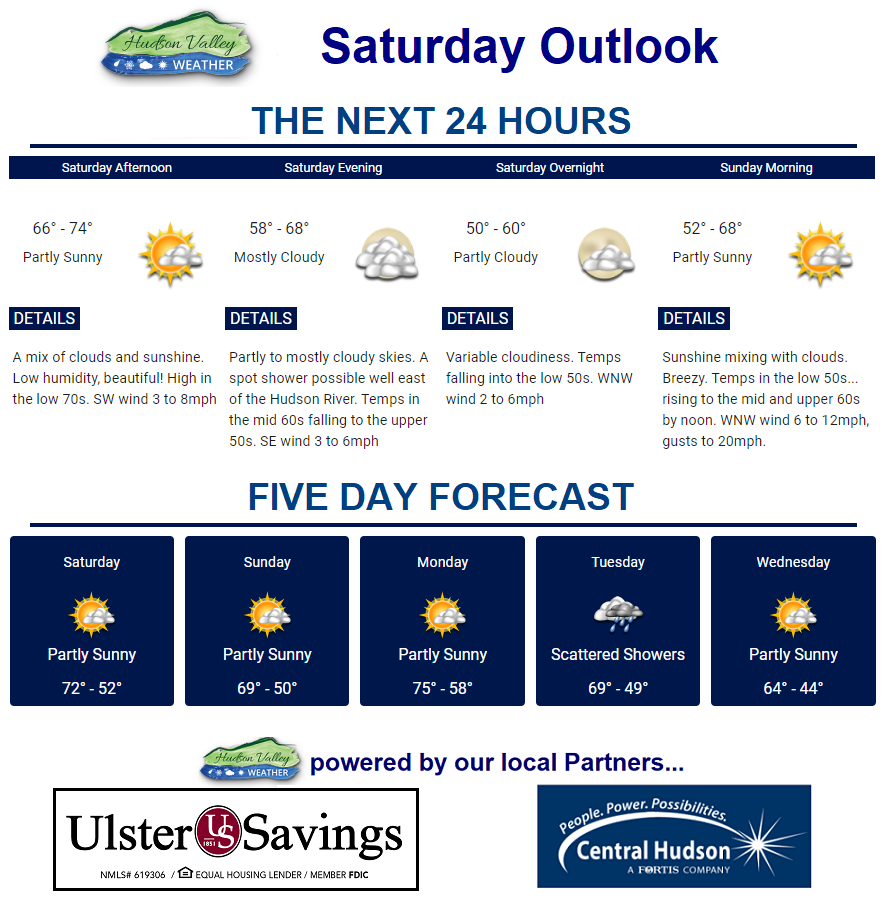 Looking to the week ahead, no significant storms heading our way. However, a weak frontal boundary my sink southward from Canada on Tuesday, giving us clouds and a few scattered showers. But at least through mid week, the weather looks rather tranquil. We hope everyone has a wonderful weekend!
After a dark and stormy night, the sunshine and blue skies have returned to the Hudson Valley. Looking at the 11am Satellite, Radar, and Temperature map, you can see the front has shifted east of our region, and the clouds and rain associated with it have also pushed east of the Hudson Valley. Our winds have shifted from being out of the south, to a west/northwest flow. That has pulled some much drier air, and dropped temps from the low 70s, into the low 60s. (even some 50s in the Catskills). 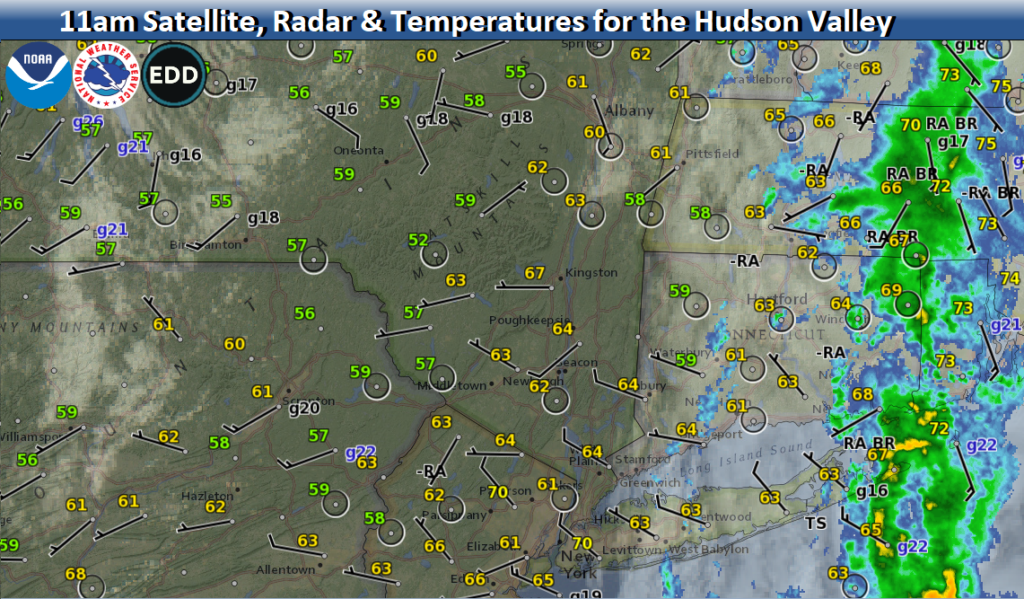 For our Friday afternoon, expect lots of sunshine and blue skies, accompanied by a few fair weather clouds from time to time. Low humidity and WNW winds will be with us, and afternoon highs in the low 70s are expected. A fantastic Friday afternoon of weather for the valley.
Tonight, expect some cool and comfortable conditions, as light winds out of the SW keep us from getting too chilly overnight. Lows in the upper 40s to low 50s are expected around the region.
Then on Saturday, partly cloudy skies with a SW wind should give us afternoon highs in the mid 70s. We’ll need to watch a weak disturbance riding up the coast along the lingering frontal boundary, and a cold front approaching from the northwest. We will watch for the potential of increasing clouds and a stray rain shower late Saturday into Saturday night, but we will likely get sandwiched in between these features as they pass by, and the Hudson Valley is likely to remain dry. Other than that slight chance at clouds and a shower… an outstanding weather weekend appears likely for the Hudson Valley. TGIF
PRELIMINARY RAINFALL TOTALS
The radar estimated rainfall totals from Thursday are quite impressive.  Showing a widespread 1 to 2 inch rainfall event, with some locally higher amounts found… especially in the higher elevations. 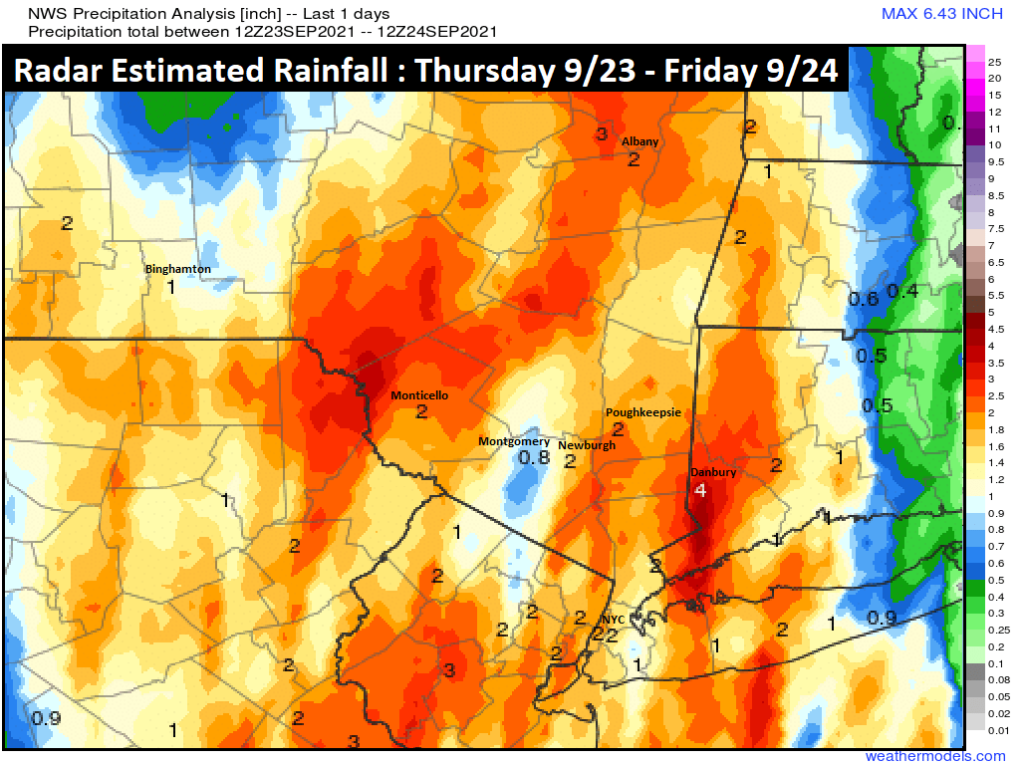