Sunshine, heat and humidity… that’s the story for our Wednesday afternoon around the Hudson Valley.  Our southerly flow is bringing the heat… literally.  Afternoon highs in the mid to upper 80s, and humidity levels will make it feel like upper 80s to around 90°.  Clouds will increase during the afternoon… and an isolated shower or T-Storm can’t be ruled out, especially in the Catskills.
Tonight, expect mostly cloudy skies, with increasing scattered showers and thunderstorms, especially after midnight.  The best chance will be in areas west of the Hudson River, and especially the Catskills… but some much needed rain showers will be possible, heading straight into Thursday.
Thursday looks mostly cloudy, with scattered showers and thundershowers possible until early afternoon, when some drier air should start to push into the region.
Hope everyone has a wonderful Wednesday!
Summer is the story for our first Friday of June in the Hudson Valley.  A warm SW flow has pulled afternoon temperatures into the low 80s where the sunshine has made an appearance, and mid to upper 70s where the clouds have been more stubborn.  Dew points are in the 60s to around 70°, giving us elevated humidity levels.  That’s setting the stage for a few scattered showers, and possibly a thunderstorm this afternoon.  The radar is mainly quiet at this hour, and should stay rather quiet for the most part this afternoon.  But a stray shower or storm can’t be ruled out with this warm and humid air mass.
Saturday we’ll see clouds and humidity to start the day, as temps climb into the 80s once again.  But a cold front will push through with minimal notice.  Winds will shift, and less humid air will push in.  That will give us a beautiful Sunday, with highs in the mid to upper 70s, and very low humidity.  That air mass will carry us into the work week, with some rather nice weather.
Hope everyone has a great afternoon, and a nice start to the weekend! 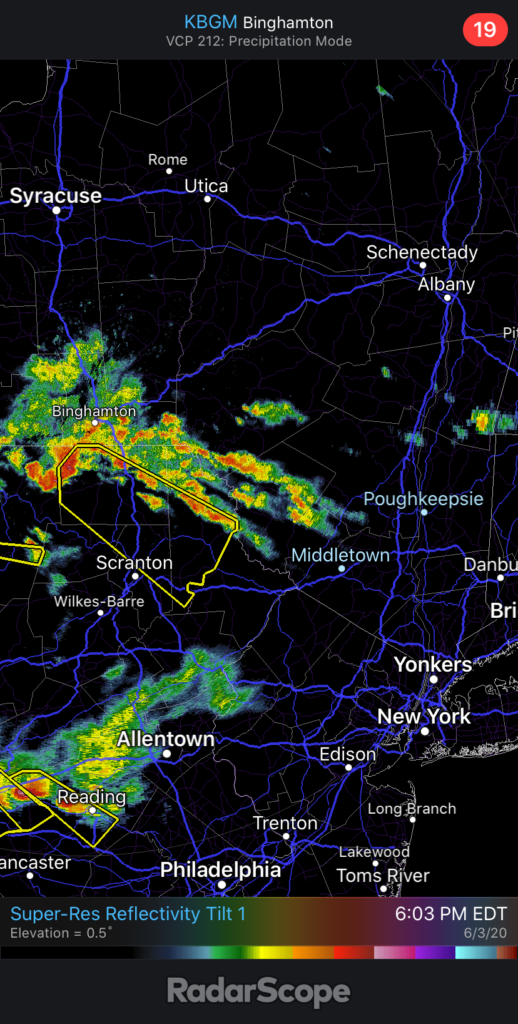 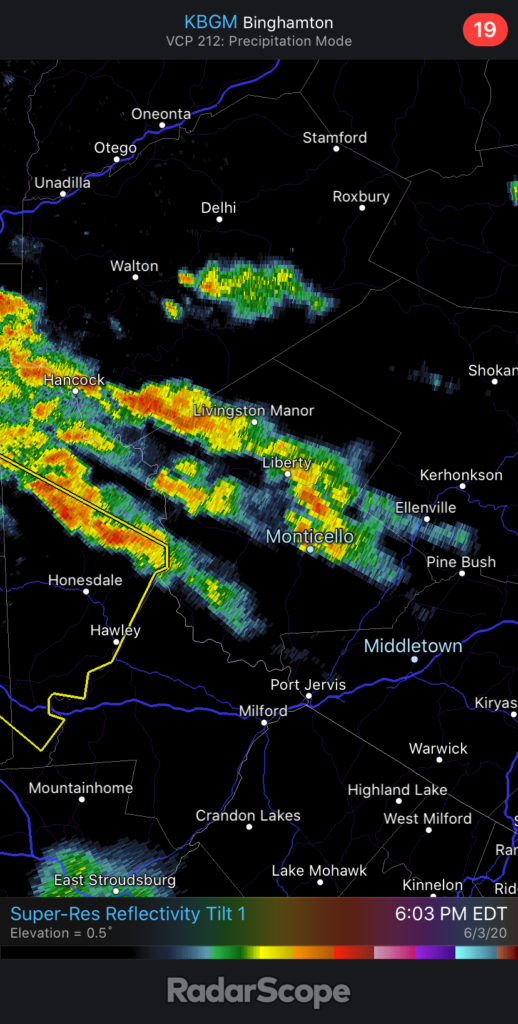 A cluster of showers and thunderstorms are pressing SE through the Catskills at this hour, and will likely impact the western half of the Hudson Valley over the next hour or two. These showers could contain localized downpours, and even some thunder and lightning, along with gusty winds. A localized severe thunderstorm is possible… though the best chance will be just west and south of the Hudson Valley. We’ll keep an eye on these over the next hour or two… but viewers in Sullivan and Orange counties are most likely to be impacted from these showers and storms as they move SE.

A beautiful back half of the weekend… and our final day of May… across the Hudson Valley.  A mix of sunshine and fair weather clouds, with a NW breeze for our afternoon, and similar conditions on Monday.  Afternoon highs both Sunday and Monday will be in the mid to upper 60s.  A touch cool for this time of year, but certainly some fine spring weather. 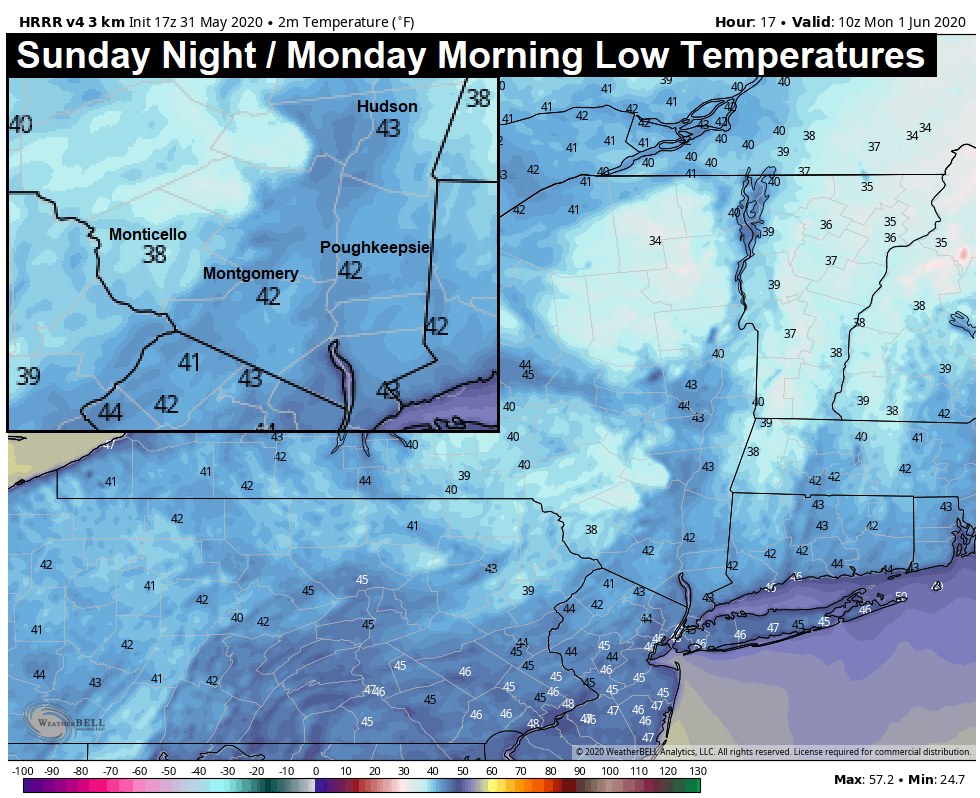 The most notable weather story for the next 36 hours will likely be the overnight low temperatures Sunday night.  Lows around the Hudson Valley will fall in to the low and mid 40s… with some upper 30s in the Catskills.  If the conditions are ideal… a few upper 30s in the northern half of the Hudson Valley would not surprise us.  A very chilly night lined up.  From there, things look rather quiet until late on Tuesday, where a few scattered showers are possible into Tuesday night.
Enjoy the rest of your Sunday afternoon!!

The humidity is definitely spiking on this final Friday of May.  But we have a cold front approaching from the northwest, and it will clash with the warm and humid air in the Hudson Valley.  Temperatures around the region are in the upper 70s and low 80s… and dew points are in the low 70s… making for a very muggy feel to the air.  That will give us the threat of severe weather later today around the region… 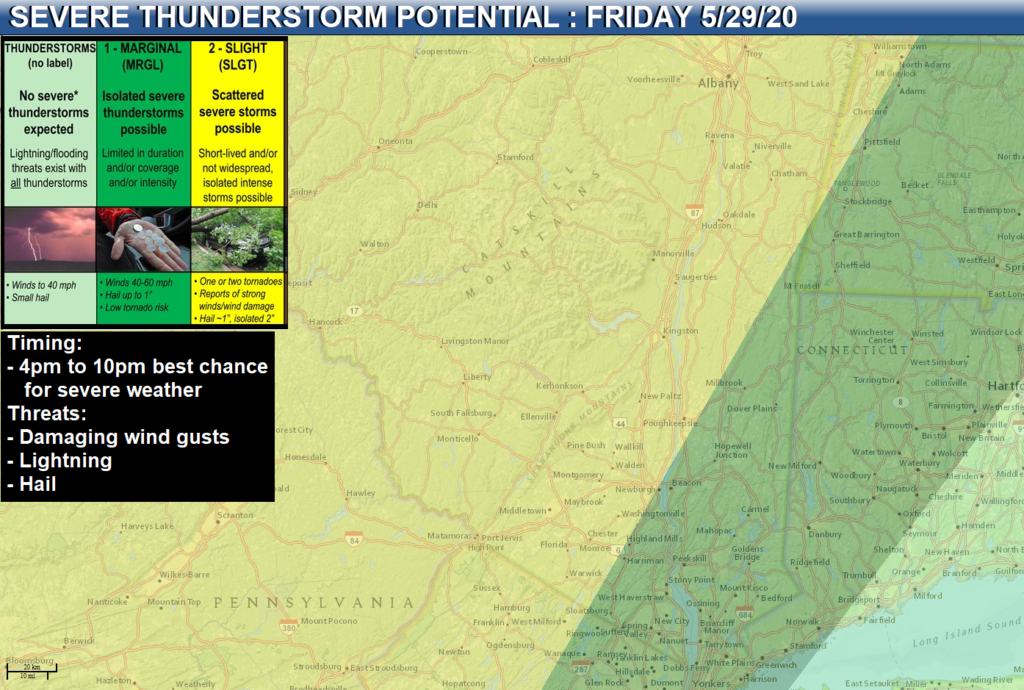 In terms of the severe threat, the Hudson Valley is divided in half.  Areas in yellow have a slight risk of severe weather… a few scattered T-storms are possible especially as we approach evening.  Because the storms will be coming from the west… our eastern viewing areas have a lower risk for severe weather.  That’s because the storm threat doesn’t hit until the heating of the day is lost.  Here’s the futurecast simulation for this afternoon and evening…

The threat for severe weather remains rather low… but we’ll have to keep tabs on the situation as the evening unfolds.

Lots of clouds and lots of humidity… that’s the story for our Thursday.  A southerly flow out ahead of an approaching storm system is giving us humid air off the Atlantic Ocean.  That’s providing the low clouds and threat of spotty rain showers and drizzle… that will be with us through Friday.
Those clouds are also serving to keep us cooler than other parts of the northeast.  Highs on Thursday will be in the 70s, but with the high humidity, it will feel quite sticky around the region.
Friday looks very similar, with lots of clouds, but possibly more breaks of sun than on Thursday… due to a slight shift in the wind direction to more SW than SE.  That could allow temps to jump toward 80° for an afternoon high on Friday.  But also means that we’ll need to keep an eye out for an afternoon shower or thunderstorm.  The chances of a storm will rise as the approaching cold front nears Friday evening… so we’ll have our eyes on that.
Behind the cold front, a cooler and much less humid air mass moves in… with sunshine and clouds expected for Saturday afternoon and Sunday.  Highs both days likely approaching 70°… putting us in line for a rather nice weekend.
Have a great Thursday!

A picture perfect Sunday around the Hudson Valley. Brilliant sunshine and blue skies should be the story today. After a chilly start, temps should warm into the low 70s around the region. For Memorial Day, we’ll see similar conditions… pushing temperatures into the low and possibly mid 70s! Some great weather for the Hudson Valley region, after a month that’s featured snow just 2 weeks ago. Have a great Sunday!!

After a rather decent week of weather, things will take a turn just in time for the weekend.  A weak disturbance along the coast will spread clouds and scattered rain showers into the northeast for our Saturday.  We don’t expect a washout, but the threat of a showers will be with us through evening.

Saturday Radar Simulation : 6am to 8pm

Saturday evening the showers should taper, and skies should clear with a northeasterly flow.  Temps overnight should fall into the upper 40s.  That sets the stage for a decent Sunday.  Partly to mostly sunny skies on Sunday, with a NE breeze… and highs around 70°.  A very nice improvement from Saturday’s unsettled weather.  Finally as we look toward the Memorial Day holiday, clouds mixing with sunshine, and temperatures again around 70°… not too bad all things considered.  So if you’re hoping to have a little BBQ outdoors, you should be good for that.

Hope everyone is staying safe and healthy… have a great weekend!

Hope everyone is enjoying the tail end of a fantastic spring weekend. Sunshine, high clouds, and a light SE breeze. Temps around the region are in the upper 60s (Catskills) and low 70s in the valley.

As we head into the work week… an upper level low pressure gets trapped over the eastern US. It will mean multiple days of unsettled weather. Scattered showers are possible tonight, with those unsettled conditions and spot showers being possible on Monday. At this point, it looks like the steady rain will be to our south and west… but upper level lows are unpredictable. Conditions should slowly and gradually improve by mid week. Not ideal weather, but surely not the cold and snow we saw last weekend! Enjoy the rest of your weekend, and start of your work week.

If it feels like it was only a week ago that we were talking about snow… well, it was.

But on this Friday, it’s not snow that we have to worry about… it’s severe weather.  We’ll outline the threat, and then give our thoughts. 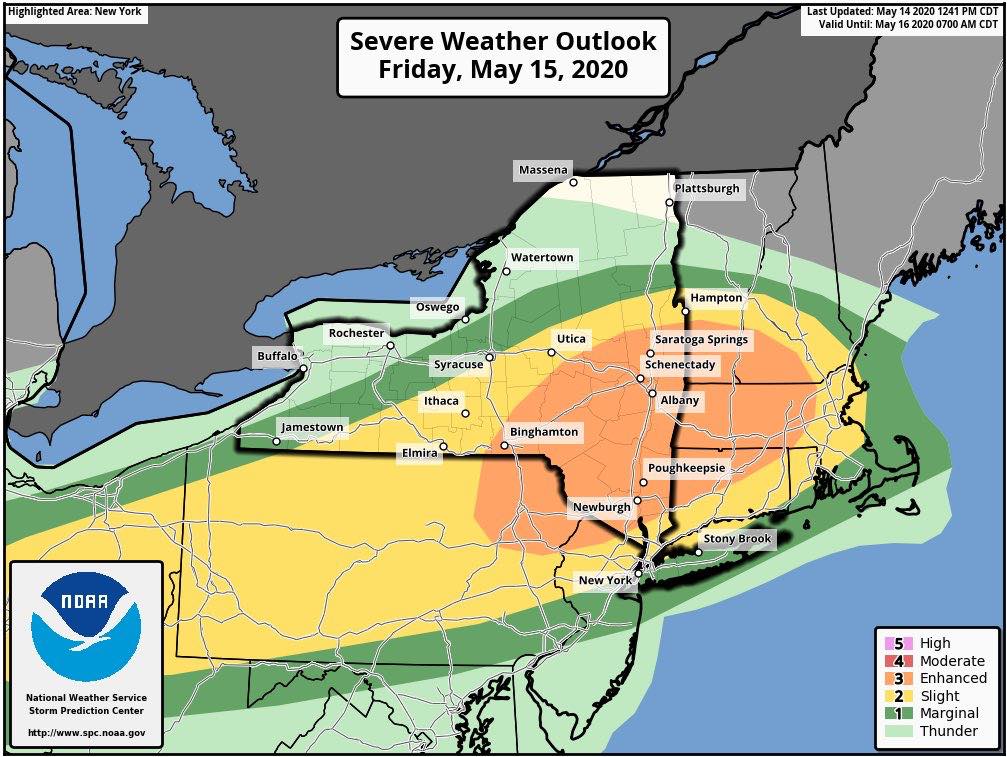 This is what the National Weather Service Storm Prediction Center thinks the threat looks like for Friday night.  A low pressure system will drag a cold front across the northeast.  The relatively warm and moist air in the Hudson Valley (highs likely in the low 80s), will set the stage for some strong to severe thunderstorms as the front approaches.  The severe threat with these storms will include:
– Damaging wind gusts over 50mph (up to 30% chance)
– Large Hail (<15% chance)
– Isolated Tornado (< 5% chance)

Timing of the front will be the key, because most of the storms will be fueled by the heat of the day.  So once the sun sets, the severe threat will gradually diminish.  Here’s a simulation of the front moving through.

HRRR Futurecast Simulation : 2pm to 2am

You can clearly see the line of storms packing a punch during the afternoon, but it weakens considerably by its arrival in the Hudson Valley.  This simulation has the storms reach the Catskills shortly after 8pm… and spread into the rest of the region between 8pm and 10pm.  Gusty winds, heavy downpours, and lightning are possible.

But if this scenario plays out… the Hudson Valley very likely will escape the worst.  Here is another scenario with a similar outcome…. 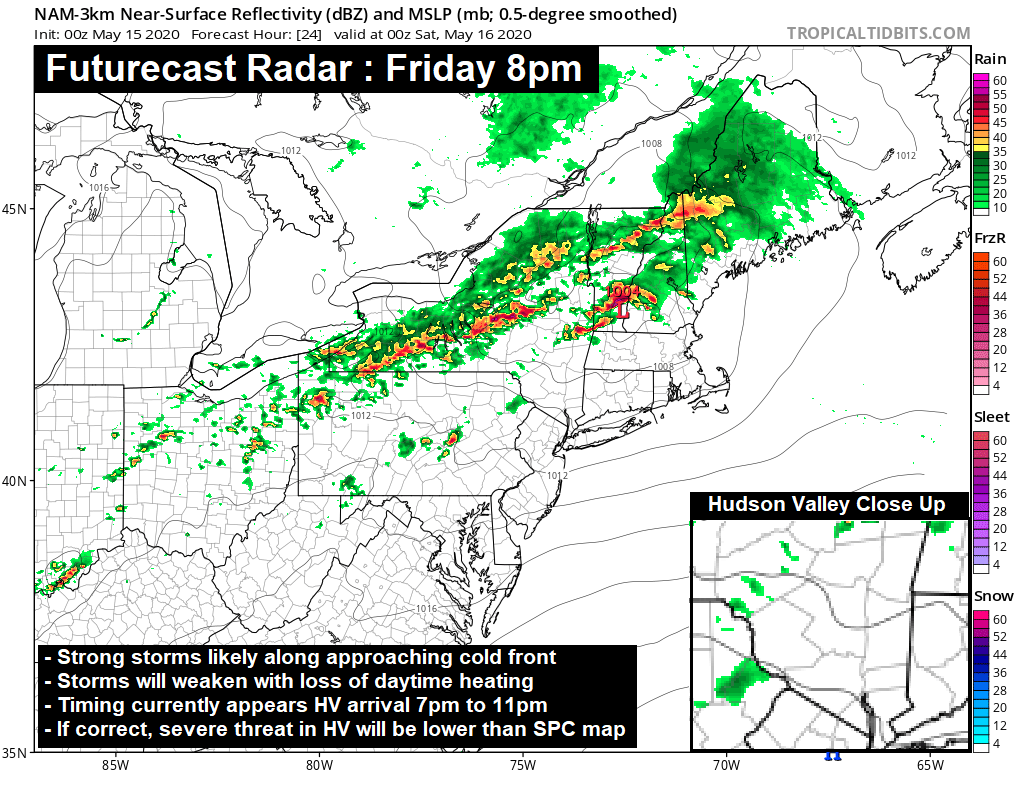 This snapshot for 8pm has the line of storms even slower than the first simulation.  As of 8pm, the storms don’t even appear in the Hudson Valley (lower right of image).  This would be good news for the region, because while some thunderstorms and heavy downpours are possible… we would be spared any widespread severe threat.

With all of that said… in these situations, we always prepare for the worst… and hope for the best.  We’ll try to share updates as the day progresses on Friday.  But let’s take some good news out of this whole thing… Friday is going to be absolutely gorgeous… with highs in the upper 70s and low 80s.  Hopefully some of you can get out and enjoy it! 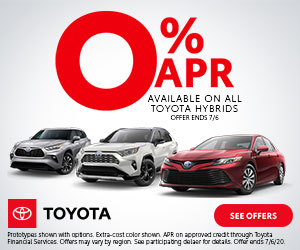