It’s been a while since the Hudson Valley has had a major snowstorm.  March 2017 was the last time the entire region was expected to see a snowstorm of this magnitude.  All indications are that when all said and done… most of us will have over a foot of snow on the ground.  The biggest question to answer… is just how high some of the snow totals will be.

Timeline:
– 4pm to 8pm (updated) Wednesday : Snow begins from SW to NE in the region
– 9pm Wed to 6am Thu : Snow falls heavy at times
– 9am to 1pm Thursday : Snow tapers off from west to east 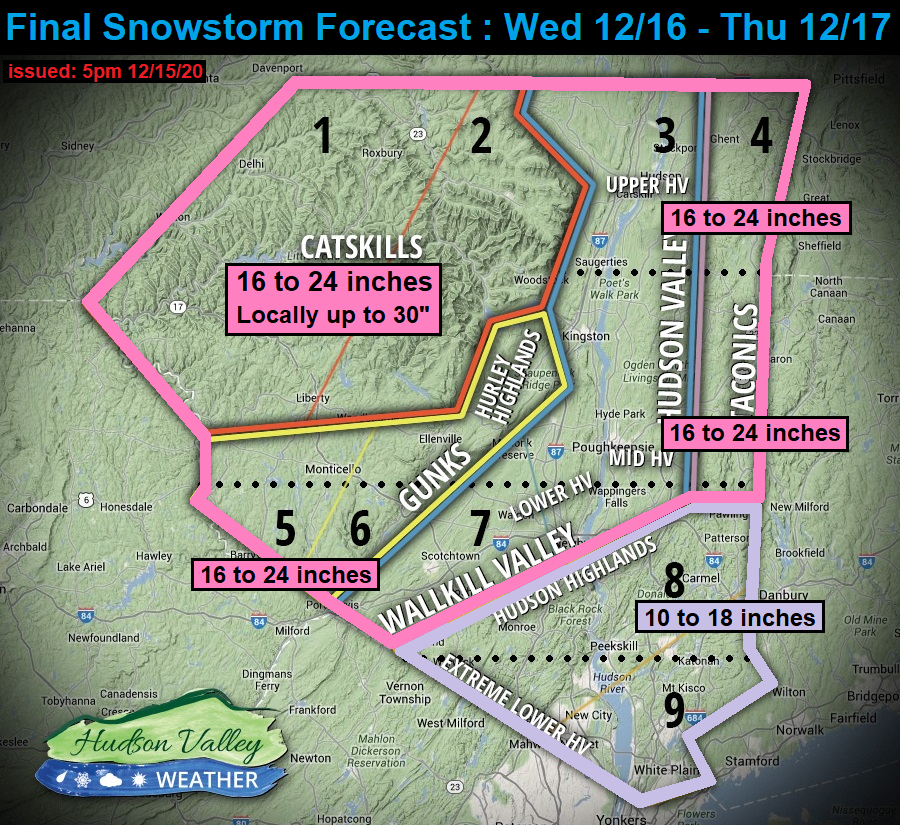 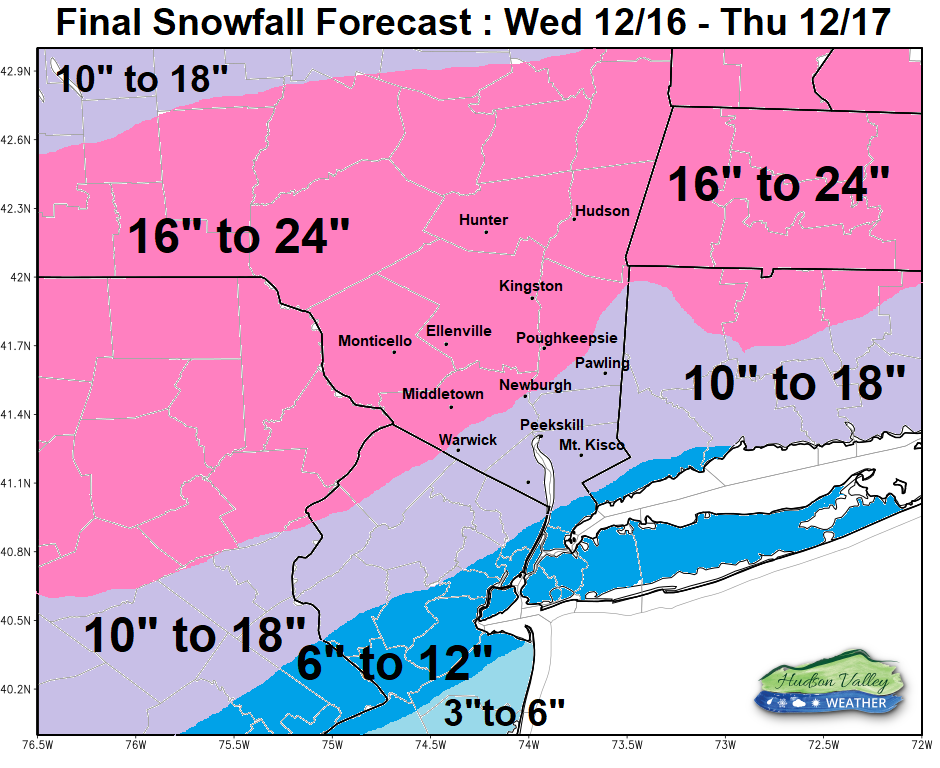 **Important Notes:
– Storm track much further north than preliminary forecast, hence higher totals
– Dry slot could push into lower HV could limit snow totals a bit, as well as potential for sleet mixing
– Very cold air will create a fluffy powder that will blow and drift

Winter Storm Warnings are in effect for the entire region, as there is now unanimous agreement from the computer guidance.  A significant winter storm is going to impact the Hudson Valley on Wednesday night into Thursday Morning.  The setup remains the same, the surface low pressure develops off the east coast, as a deep upper level low digs in over the Ohio Valley.  The low pressure will begin pushing northward along the coast… sending warm moist air over top of very cold air at the surface.  The result will be heavy precipitation, that will fall in the form of heavy snow in the Hudson Valley. 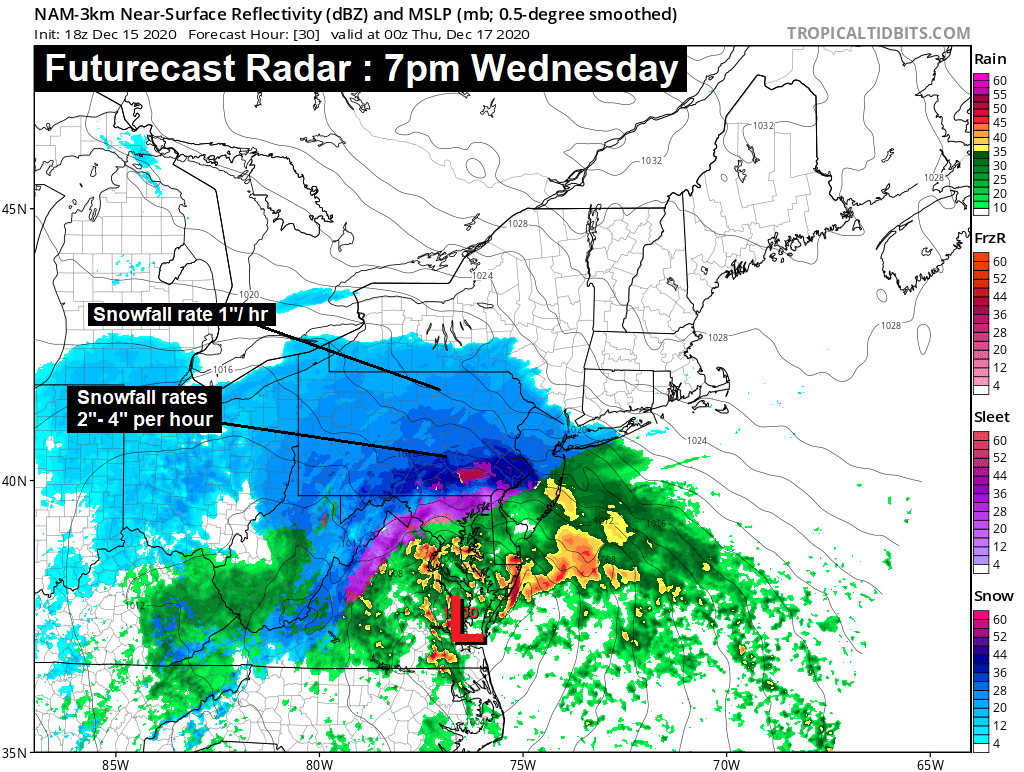 The snow likely begins between 5pm and 9pm, depending on how quickly the moisture progresses northward.  But what is likely, is that conditions will go from cloudy, to heavy snow, in a short amount of time.  You can see on the map above, that there are bands of heavy snow that set up within the system.  Some of those bands will be at rates over 1 inch per hour… in some cases, over 2 or 3 inches per hour.  Travel will be exceedingly hazardous Wednesday night. 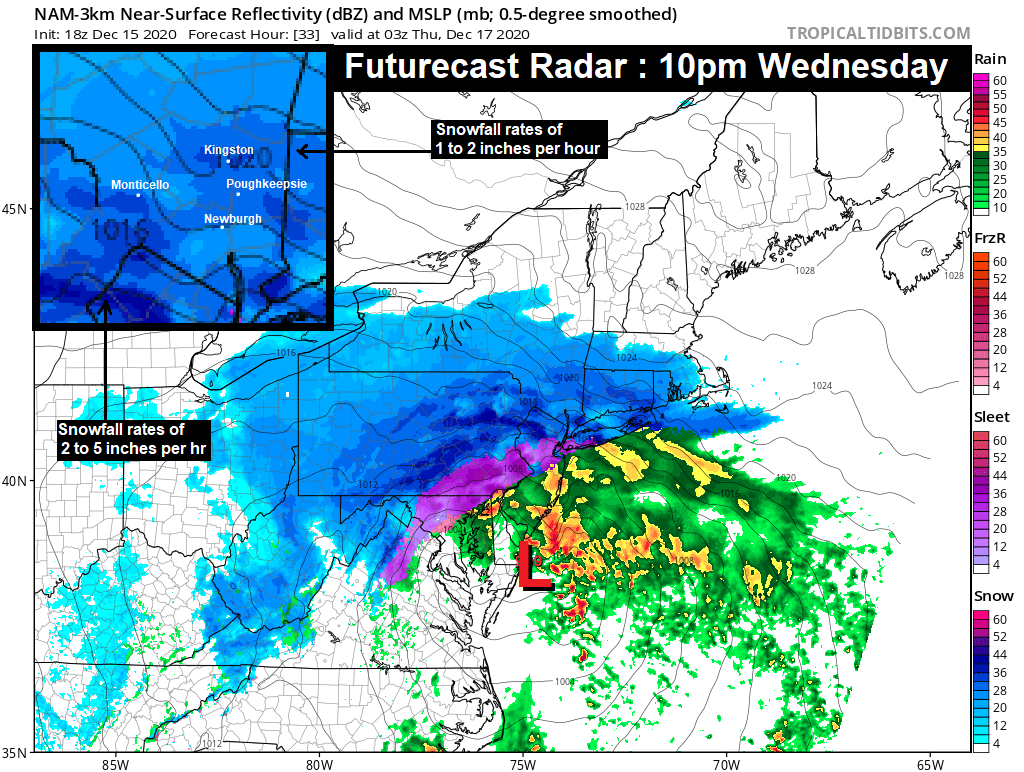 As the snow moves northward, you can see the heavy snow bands are projected to push through the Hudson Valley before midnight.  Snowfall rates potentially well in excess of 1 inch per hour, will combine with strong wind gusts out of the northeast.  The blowing and drifting of snow will lead to white out conditions at times… making travel nearly impossible.  This storm will continue to push northeast through the night, progressing out of the Hudson Valley by mid day on Thursday.  To get an idea of how this system might unfold, here is the futurecast radar loop for the entire event…

Notice that the guidance is so far north, that the system attempts to see sleet mix into the snow across the Hudson Valley.  We have concerns about the validity of this possibility, but we need to track it closely and monitor the potential.  If sleet were to somehow mix in… it would hold snow totals down just a bit.  What is noticeable regardless… is that this low pressure system is projected to get much  further north than we first expected.  That is why the snowfall forecast totals are so much higher than the preliminary forecast.

Our snowfall forecast map may have caught some people off guard, as the totals are nearly twice as high as the preliminary map suggested.  The cause is the dramatic change in forecast track of the coastal low pressure system.  It is now expected to move significantly further north than originally expected.  The resulting moisture that pushes into our area, will combine with very cold air, and produce ideal conditions for a light fluffy snowfall.  The snow ratios will be nearly double the normal 10 inches for every 1 inch of liquid… with us possibly seeing 15 inches or even 20 inches of snow for every 1 inch of liquid.  The end result is computer guidance that suggests the following snowfall… 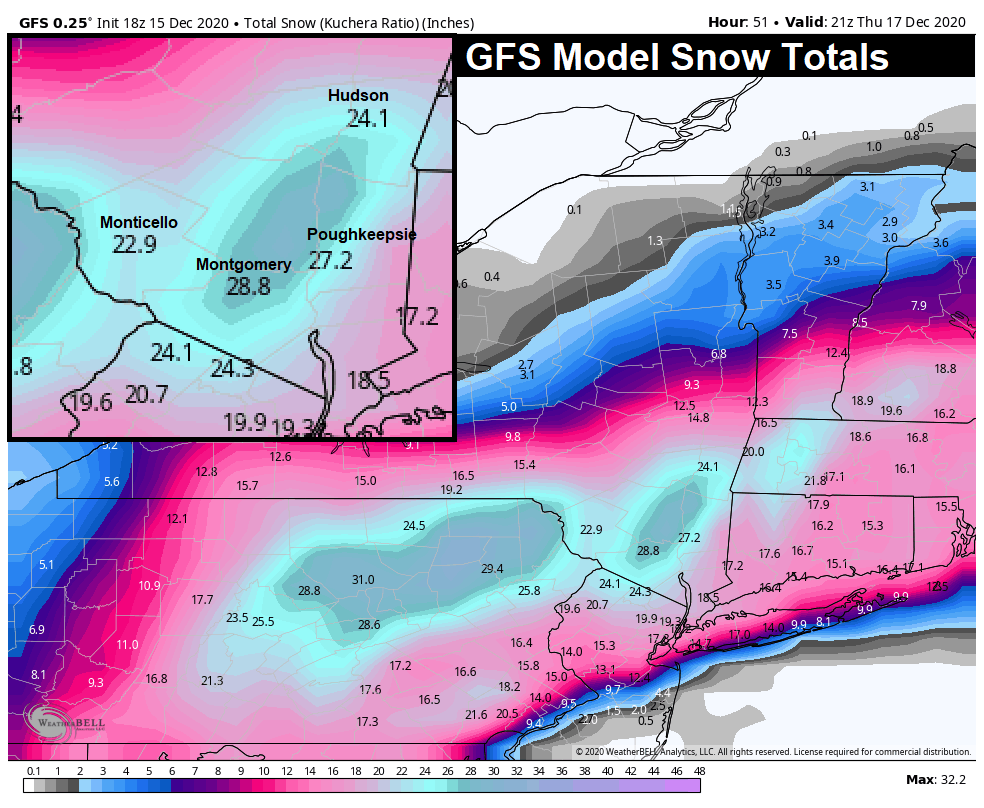 Every version of computer guidance suggests minor variations of the same thing… the image you see here.  DRAMATIC snowfall totals are expected, with snowfall rates of 2 to 4 inches per hour, expected for 3 to 4 hours… the snowfall will really pile up.  That’s why we have some areas pushing over 24″ of snow… because where the banding of snow lingers the longest, is where the snowfall totals could possibly reach even 30 inches in some spots!!  Pinpointing these locations will be impossible, so we have generalized the forecast map.  Please recognize that these kind of snow totals will make travel and just about any activity virtually impossible.  Please plan for severe disruptions beginning Wednesday night and lasting through the day Thursday.

We will continue to cover this system through the day on Wednesday, as we have nearly 24 hours (from the time of this post) before the storm begins.  Check back for updates and details, as we continue to try and pinpoint more details about the timing, and intensity of these snowfall bands. 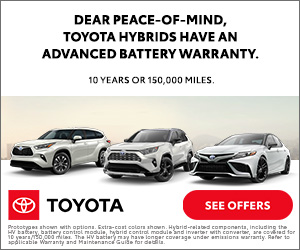 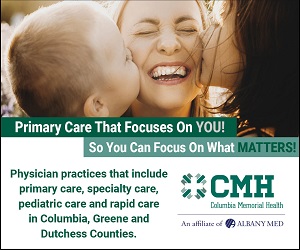