Another summer is behind us, and the transition into autumn is upon us.  As the leaves begin to turn, many minds also begin to turn… to thoughts about what the coming winter season may hold.  Snow lovers begin to get excited, and winter haters begin to dread what lies ahead.  So as speculation begins to increase on the coming winter… that means it must be time for the 2019-2020 HVW Winter Outlook.  This year, we’re going to take a Preliminary look now, and follow up with a final update in late November.  This way we can discuss our ideas, and then update everyone on the trends, and if we need to make any changes to our preliminary ideas.  Will the coming winter be warm?… or bitter cold?  Will we see mountains of snow?… or will the winter be more wet than white?  These are some of the questions we’ll attempt to answer.  So enough small talk… let’s see what the coming winter might hold. 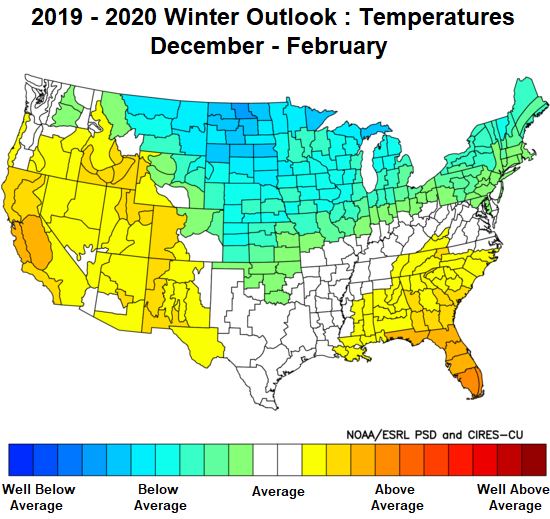 Temperatures this winter are likely to be near normal, to slightly below normal.  The range of -1.5° to +0.5° is due to the fact that we see some signals that could result in this winter being a chilly one.  The conditions heading into this winter are similar to the recent winters of 2014-2015, and last year 2018-2019.  Last winter was about 1.5° to 2.0° above average, while the 2014-2015 winter was about 3.5° below average.  So with both winters showing similarity to this coming winter, the tiny details will determine which previous winter our coming winter will look like.  The front half of the winter looks milder, with the back half of the winter looking more likely to be colder than average. 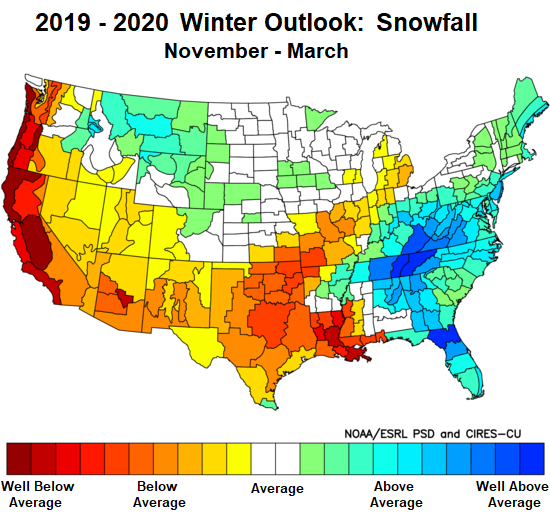 Snowfall for the coming season appears likely to be near average, to slightly above average.  The average snowfall in Poughkeepsie for the entire winter season is 43.7 inches.  We anticipate roughly 100% to 125% of normal snowfall totals in the Hudson Valley… that would translate into roughly 45″ to 55″ of snow in Poughkeepsie.  Seasonal snowfall is notoriously difficult to project, because along the east coast, nor’easters are wildcards that can drop 12″ or more in one shot.  The pattern that we expect to set up this winter should give us a few shots at nor’easter development.  If this season reaches its full potential, we wouldn’t be surprised to exceed the high end of our forecast range.  With that said, in general, we do believe that the storm tracks will be further east than last winter… leading to more snow events, and less wintry mix events than we saw last winter.  That should allow the seasonal snowfall totals to be higher than what we saw last winter, when Poughkeepsie saw 31.5″.

(Disclaimer: This section may not be for everyone, it’s very heavy on the science behind the projection above.)
For anyone who may be new to HVW, we produce the Winter Outlook each year at this time.  Our goal is to provide a science based, long range projection of the coming winter season.  We combine our forecasting experience with computer data and historical trends, to produce the winter outlook each year.  Because there is computer data involved in creation of the outlook, it’s basically a ‘forecast based on a forecast’.  So if some of the assumptions we make to create the outlook turn out to be wrong… the winter outlook will be affected.  So lets take a look at how we arrived at the Winter Outlook.

Oceans absorb and store a tremendous amount of the earth’s heat, and that heat is transferred into the atmosphere.  Whether sea surface temperatures are influencing tropical storm development, helping to influence areas of high and low pressure, or whether an el nino or la nina are in place… oceans are one of the most (if not THE most) influential drivers of the weather pattern.  As such, how the ocean temperatures compare to average, are a fundamental key to deciphering what the coming winter may hold.  So, let’s see what our current SST (sea surface temperatures) look like… 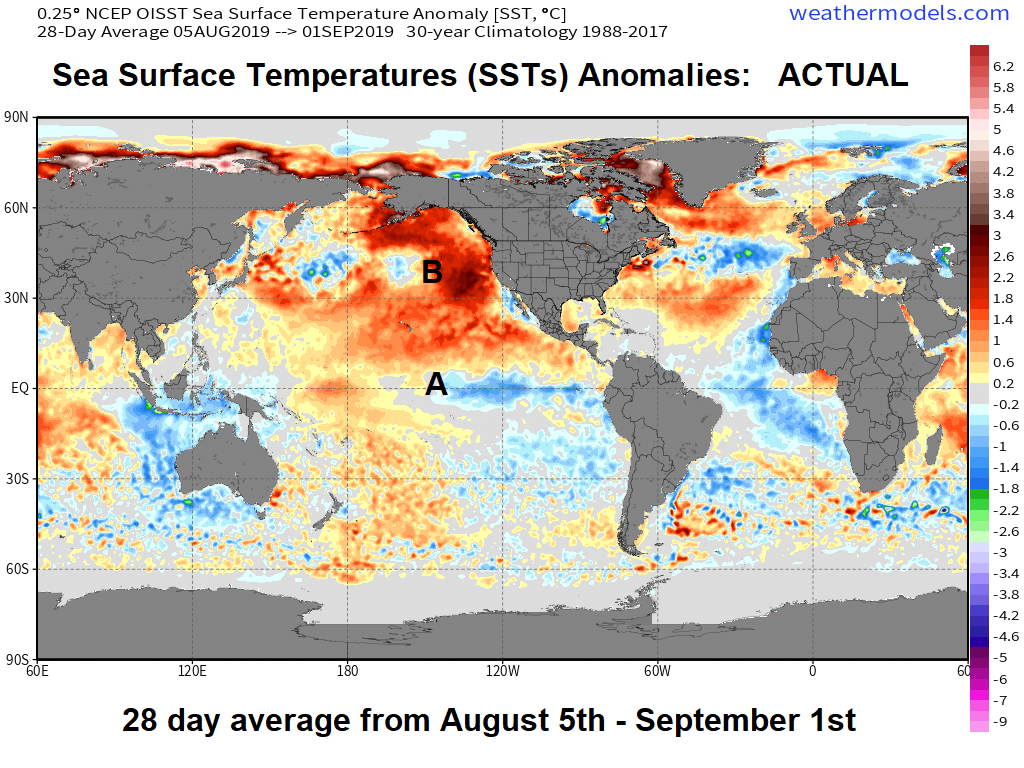 The United States is in the upper middle of the global SST map.  The first thing that will jump out at you, is the bright red coloring in the Pacific Ocean.  That is indicative of well above average sea surface temperatures (SSTs).  We have highlighted 2 specific areas to focus on; (A) the Tropical Pacific, and (B) The Northeastern Pacific Ocean.

So now that we know the current conditions, let’s look at the projected conditions for the coming winter.  Below are the CFSv2 model, and the JAMSTEC model projections for Sea Surface Temperatures (SSTs) from December through February… 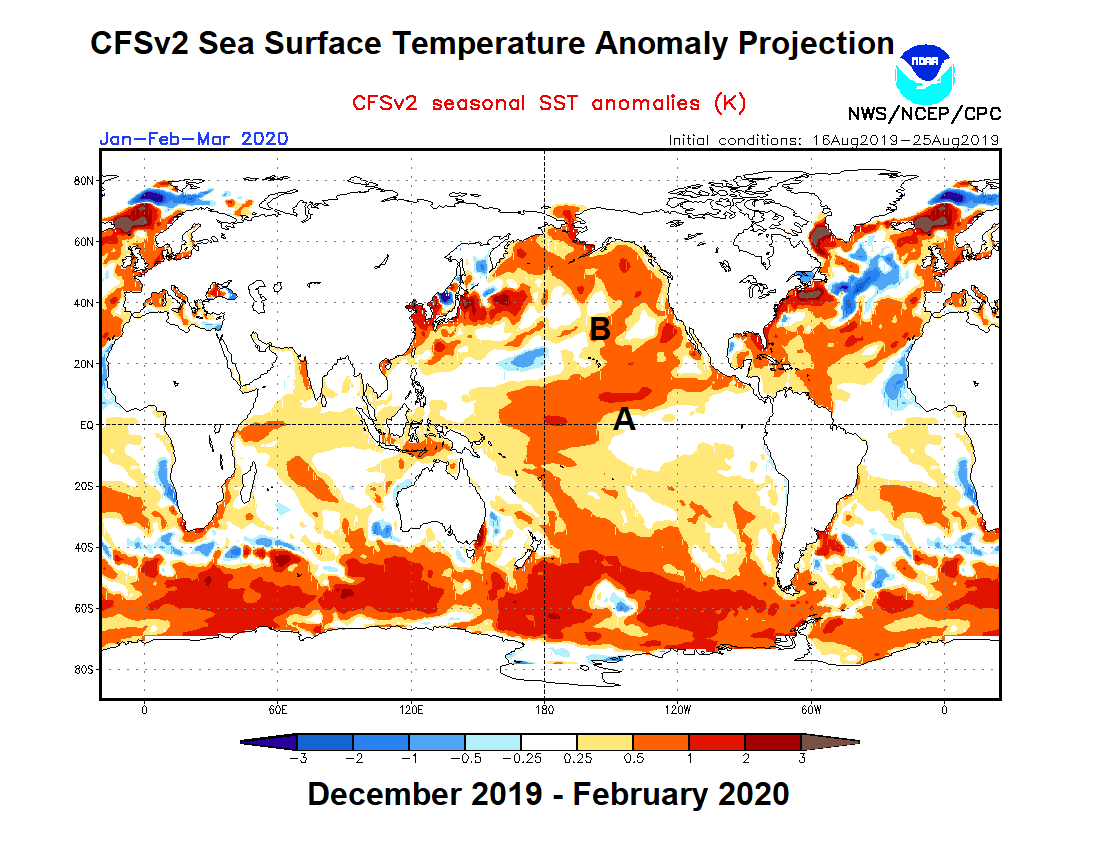 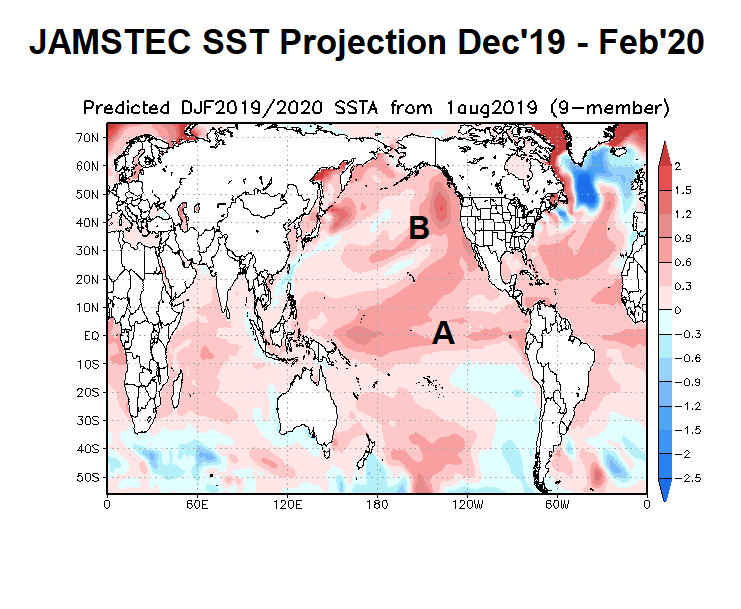 Now, comes the hard part.  We closely review the current conditions and the computer model projections for the winter.  Then we analyze ALL of the winters from 1950 to 2019.  Of those 70 winters, we identify those where conditions most closely resembled our current and projected conditions.  We combine them to create our “analog” winter… or the combination of years that most closely resemble the projected conditions for the coming winter.  Here is our analog for this winter… 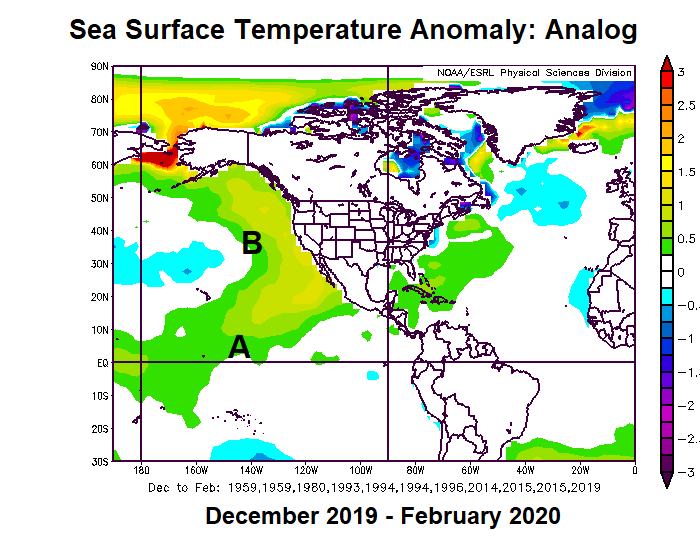 When you compare our analog to the CFSv2 and JAMSTEC model projections, you’ll notice all 3 are very similar, with a few minor differences.

Area A, the Tropical Pacific is slightly different between the two computer models.  The JAMSTEC is slightly warmer than the CFSv2, but both are rather neutral in temperatures (near average).  So we don’t expect an el nino or la nina.  If the JAMSTEC is right, we could see a very weak el nino known as a “modoki el nino”.
Area B, the Northeast Pacific Ocean is very warm in both computer model projections, as well as our analog.  If you look at the Pacific Ocean as a whole (A & B together), all 3 maps display a very similar pattern of warmth, as well as the cooler than average water north of Hawaii.
While not labeled, if you look at the Atlantic Ocean (east of USA) you’ll notice our analog has warmer than average water off the east coast of the US, just like the models, and the cooler than average water south of Greenland on our analog, also consistent with the model projection.
We’ve combined multiple different winters, and weighted some more heavily than others, depending on how closely the conditions resemble what we anticipate this winter.

It’s probably the perfect time to do this section.  We just completed our recap of last winter and the comparison to the winter outlook.  So we’ve just analyzed last winter, and looked for weaknesses and errors in our methodology.  There are 2 factors we want to discuss, and the possible ramifications on the winter outlook.

First, there is the “cool” patch of water projected by the CFSv2 model off the western US coast… 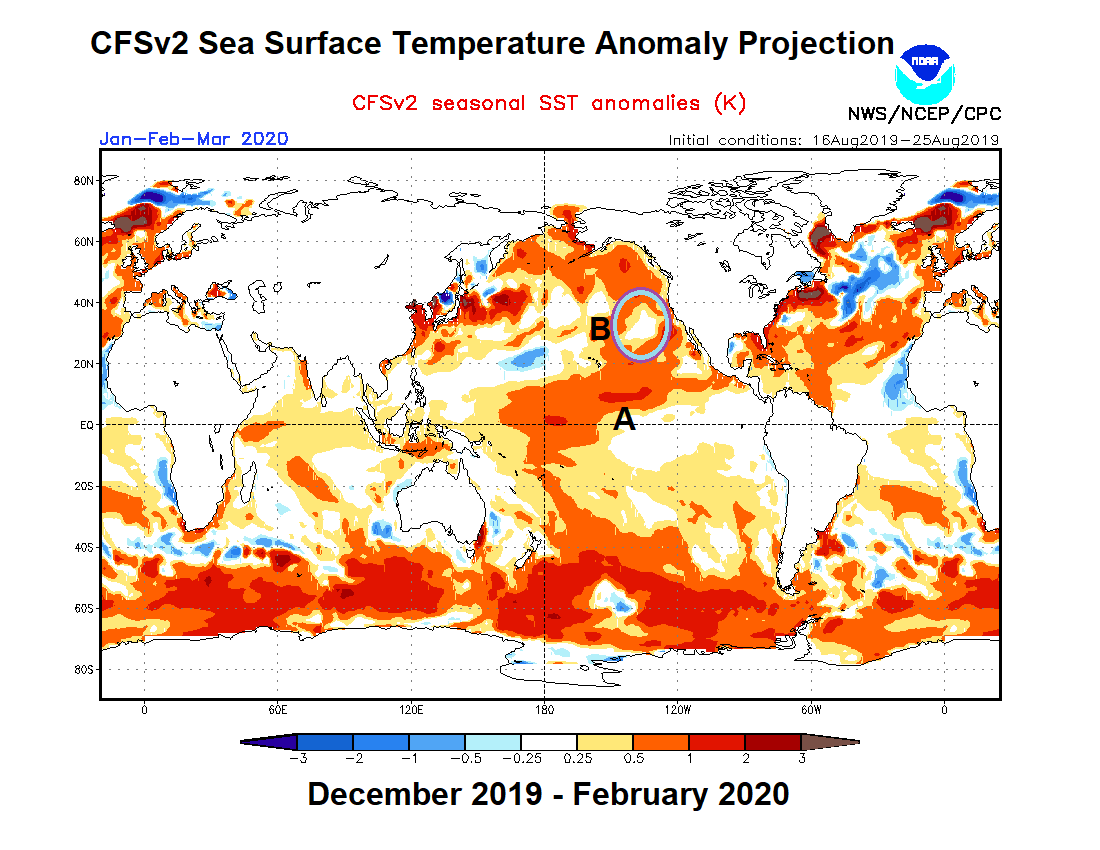 We circled the area just to the east of the “B” on the map.  A small area of near normal temperatures… in a sea of well above average water.  It doesn’t look like much, but something similar to this was a major factor in the busting of last winter’s outlook.  You can read about all the details here: Winter Recap : 2018-2019 Winter Outlook Review.
Could it happen again? … Not likely.  The reasons are two fold.  First, this model is not supported by the JAMSTEC model, which has a solid band of warmth in the area in question.  Secondly, the area NW of Hawaii is cooler than average water, something last year did not have.  So we think this is not a big issue for uncertainty.  However, we still want to keep a close eye on this area as we move into the winter.  If this area is cooler than average… it could have major implications for the weather patterns that set up.

The 2nd “Wild Card” is much more interesting… let’s call it the “safety off” scenario.  When we began working on the Winter Outlook, and compiling all the winters that most closely represented this year, one winter stood out above all others.  The 2014-2015 winter.

On the left is the 14-15 winter… and on the right is this year’s JAMSTEC model for the winter.  The patterns are eerily similar.  For anyone who may not remember, December was very warm, and January was cooler… and then February was record breaking cold!  So we factored in the 2014 – 2015 heavily when creating this winter outlook.
So what’s the big deal?  … well, 2014 – 2015 was such a severe winter, to create our temperature projections for the winter, we had to tweak our settings.  The 2014-2015 winter was making our winter outlook too cold, and we needed to moderate the temperature outlook.  So we minimized the weight we gave to the 14-15 winter just a bit.

So when we discuss our concerns for a wildcard… the possibility that this winter is colder than what we are projecting, is on the table.  If we take the “safety off” and apply the proper weight to the 14-15 winter based on the similarities, this is what the winter temperatures look like… 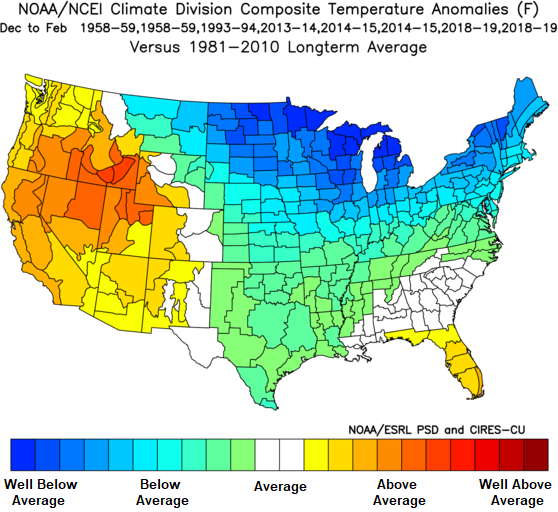 This would be a much colder winter than what our actual outlook is suggesting.  You may ask, why don’t we use this as our outlook temperature projection?  The truth is, that was a record breaking winter.  And similarities aside, it’s not wise to use such an anomalous event as the basis for your winter outlook, or any forecast.  Many factors created the record cold February 2015, and to believe that will happen again, is irresponsible.  We only mention it here in this section, because we want to highlight that the temperature profile of the Pacific Ocean is very similar, and conductive to a potentially very cold winter.  We’ll have to see if the factors come together to give us the colder solution… but odds are much better that we’ll experience a more temperate winter.  That’s not to say it can’t be very cold at times, but lets wait and see.

So there you have it… the 2019-2020 Winter Outlook.  We hope you’ve enjoyed what we swore would not be as all encompassing as previous outlooks, but somehow became very, very thorough.  We greatly appreciate all your support, and can’t wait to help guide you through another winter in the Hudson Valley.  Keep Calm… and Weather On.  Thanks for reading.