In the span of just 5 days, the Hudson Valley was punished by 2 major nor’easters. In their wake, these storms have left us with…
– nearly 3 feet of snow in some places…
– thousands of people without power in other places…
– and all of us with a reminder of what winter storms in the Hudson Valley can be like.

So lets take a look at the recap.  We’ll start with the map review of our “Final Snowstorm Forecast” that was issued before the storm began (not the adjusted forecast map that we put out after realizing the storm was going to take a different track).  Next is the “Snow History Map” which shows what actually fell based on a combination of reports and radar data.  Finally will be the National Weather Service Snowfall Totals, which are reported in by NWS trained spotters. 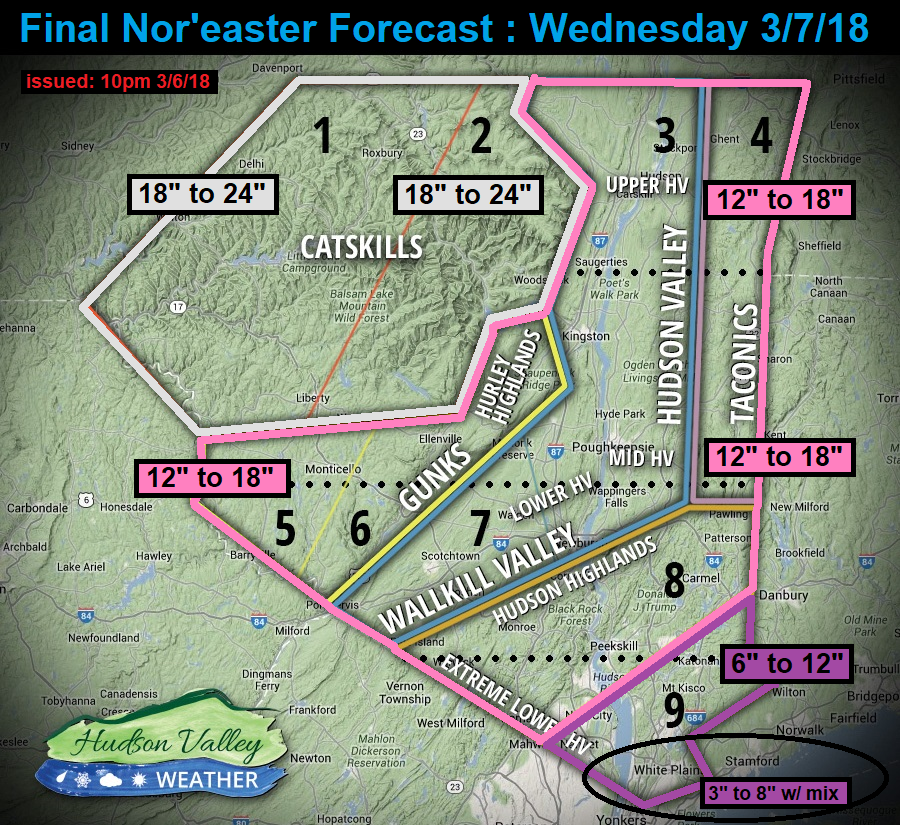 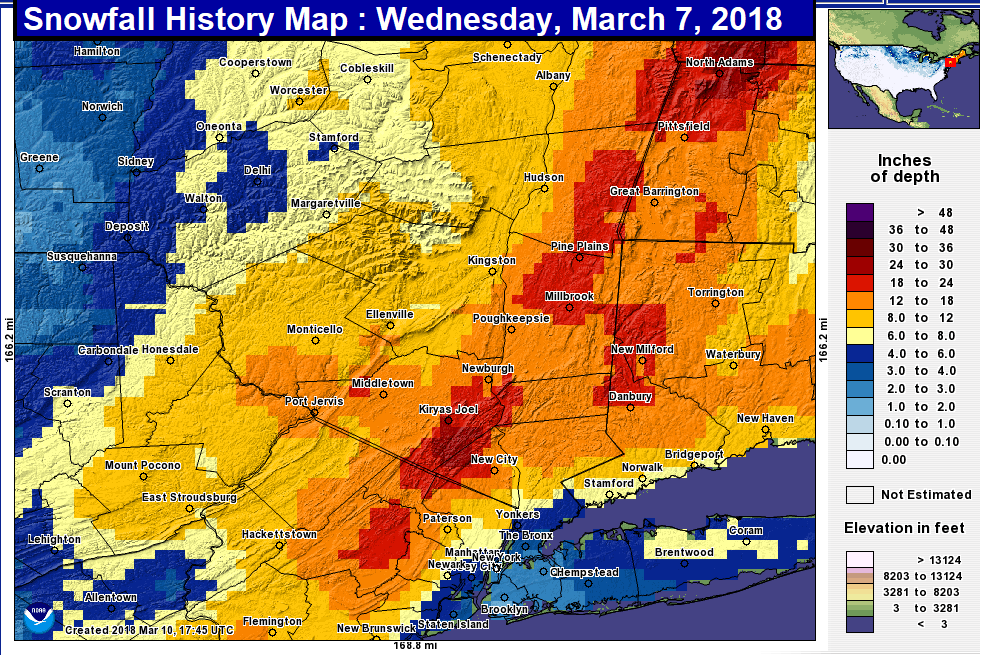 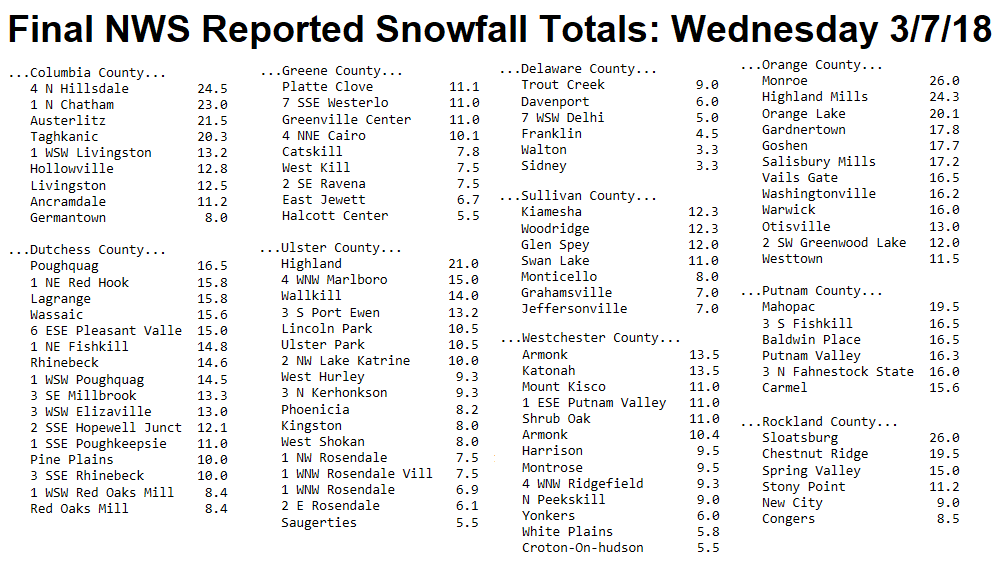 So… before we get out our mental snow shovels and begin to dig into this, in general… if we take the entire Hudson Valley together, we didn’t do too bad.  The southeastern 75% of the Hudson Valley saw 12 to 18 inches of snow on average (or more in some cases).  The northwestern 25% of the region got shorted on snowfall amounts… and we’ll discuss why in a moment.

So when you look at the map, there is a broken red stripe that runs diagonally from SW to NE across the Hudson Valley.  SE Orange, NW Rockland, bits of Putnam, northern Dutchess and much of Columbia counties… all got crushed by this storm.  Monroe with 27″, Sloatsburg with 26″, Highland Mills with 24″, Hillsdale with 24″, Chatham with 23″, Orange Lake with 20″, Mahopac with 19″… all of those locations, as well as others, were under that little stripe.

The reason those areas hit the snowfall jackpot, has to do with a feature we spoke about numerous times during the forecasting phase of the storm… snowfall banding.  There was a deformation band of snow that set up on the northwest side of this storm… affectively the boundary between the moist flow of air off the ocean, and the cold, dry air on the back side of the system.  This intense band of snow formed over the SE half of the Hudson Valley during mid afternoon, and then slowly pivoted overtop of them.  Resulting in an extended, multi-hour period of snowfall rates at 2 to 3 inches per hour! 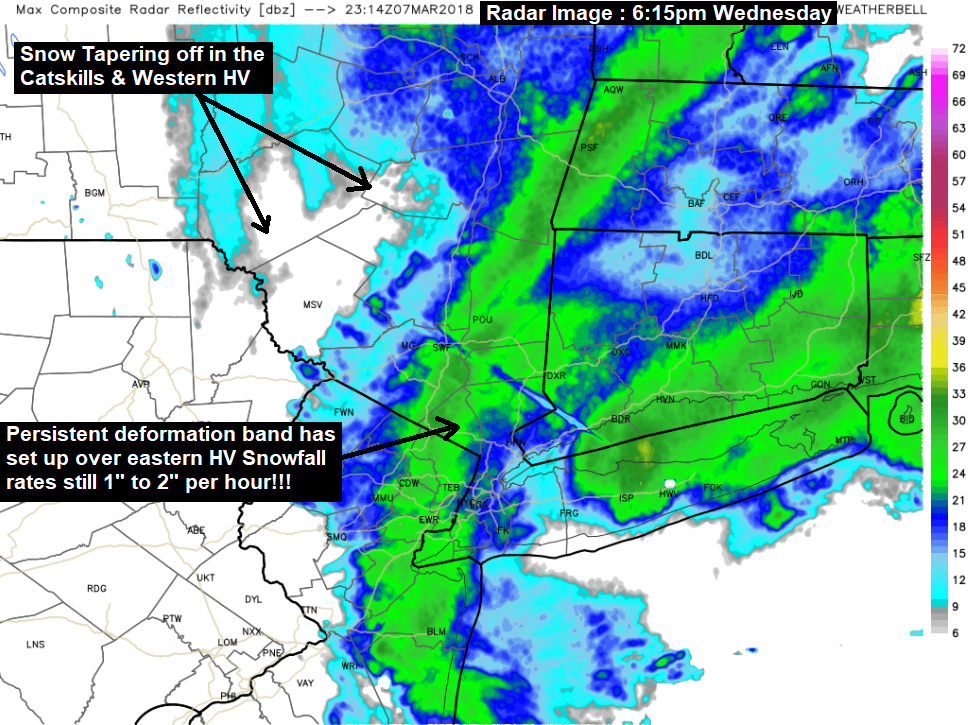 Just look at this band of snow… even as of 6:15pm!  When you start to examine where the snow totals were off the scales… it’s no secret as to why areaas like Monroe got 26 inches of snow.  This band hammered them for hours.

The Rip Off Zone

The same image above that highlights the jackpot zone, can tell you exactly where the “rip off zone” is.  The Catskills were spared the heaviest snow totals from this storm.  After initially being projected to see 18″ to 24″ of snow in our final forecast… the storm played a dirty trick on us at the last minute, which we’ll go into momentarily.  But early Wednesday morning, we realized that some big changes needed to be made in our forecast… and by 10am on Wednesday, we released a “now-cast” adjustment to our forecast… and lowered the forecast to 5 to 10 inches across the western HV. 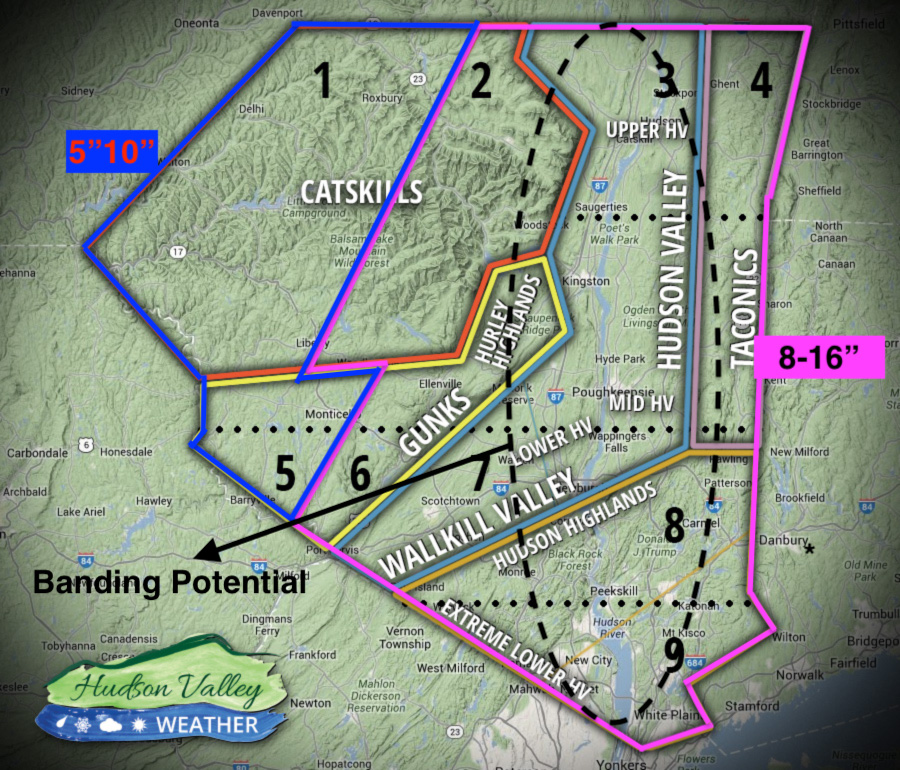 We realized that the storm was going to take a track that would simply rob the western Hudson Valley and Catskills of the moisture we were expecting to inundate those areas.  Sometimes with these dynamic winter storms, it’s not until the storm is just beginning, that you realize a change to the forecast is necessary.  We always talk about “now-casting” during storms, and this is why it’s so vital.  “Now-casting” is the process of using observations, radar data, and actual conditions… to analyze, modify or strengthen your forecast, to provide accurate information to your viewing audience.  As a forecaster, you need to be able to analyze the data in real time, and understand whether an adjustment needs to be made… so that people have the best information possible.

That was what happened in this case.  We received information in real time, that this storm was not developing where it was expected to… and we had to make significant changes on the fly.  Adjusting a forecast from 18 to 24 inches… down to 5 to 10 inches… is a pretty massive change.  When the snow dust settled, the forecast adjustment turned out to be a good one.  Kiamesha & Glen Spey had 12″, Greenville Center 11″, Monticello & Catskill and Phoenicia had 8″… and the area in general was 6 to 12 inches at the end of the storm.

What Happened?…
“Mother Nature is the Boss, that’s what happened.”

So the next part is the fascinating part from a meteorological standpoint.  In short… the guidance was wrong.  It failed to get a good hold on where the center of low pressure was going to develop.  Let’s first take a look at the consensus guidance leading up to the storm… 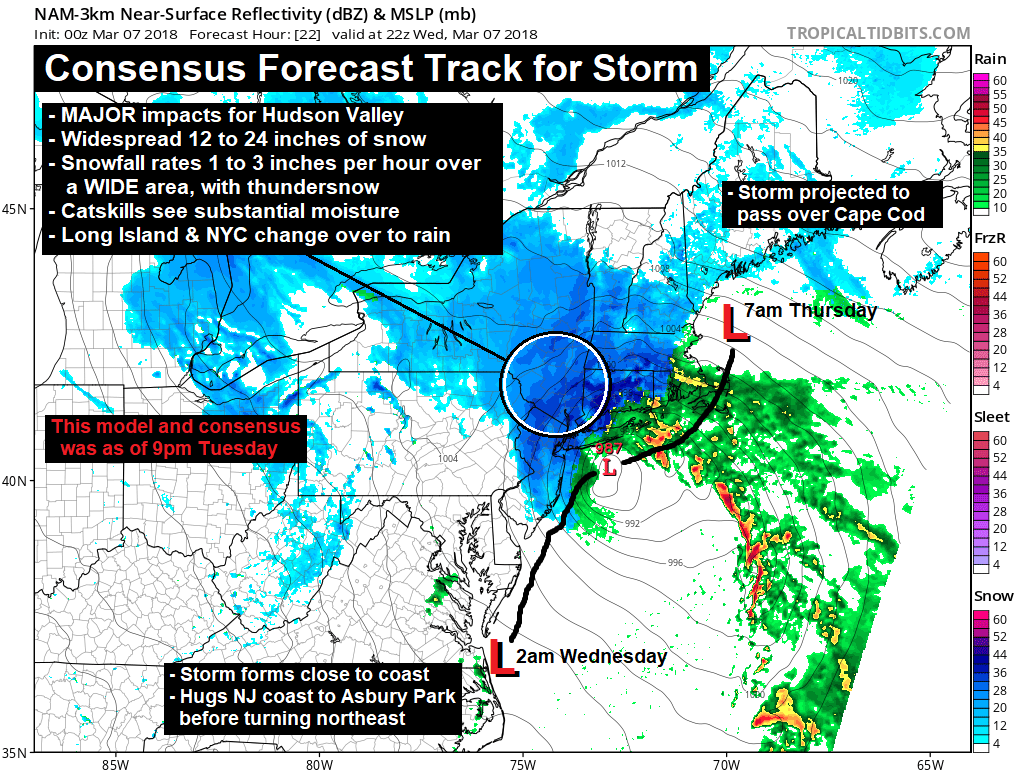 Guidance had the perfect track for the Hudson Valley, with a rapidly deepening storm hugging the coast until north/central NJ, and then tracking it just south of Long Island, before heading NE toward Cape Cod.  That kind of track will cause a change over to rain in NYC and Long Island, and even into the extreme lower Hudson Valley.  But this kind of track focuses the heaviest band of snow right over the Hudson Valley… pushing a substantial amount of moisture into the HV, and then the storm pivots east, holding the heavy snow in place for many hours.  This track was primed to deposit a widespread 12 to 18 inches of snow in the Hudson Valley, and even more in the Catskills.

However, early on Wednesday morning, we saw indications that the center of low pressure was going to take a significantly different track than what guidance had suggested.  We raced to make changes to our forecast, and when all was said and done, here’s the track that the storm ACTUALLY took… 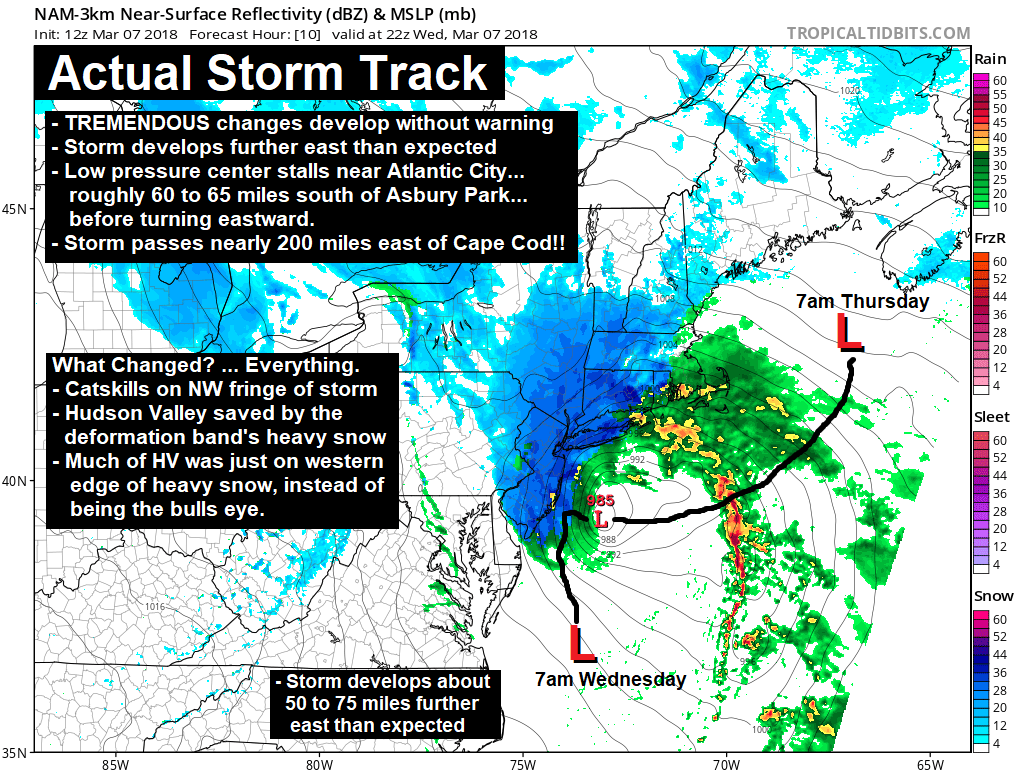 Rather than track up to north/central NJ, near Asbury Park… instead, it stalled it’s northward progression around Atlantic City… before making the turn NE.  This was roughly 50 to 75 miles further south than guidance suggested.  That meant a shift of roughly 50 to 75 miles southeast in the position of heaviest snowfall.  Now, as it turns out… the eastern 2/3 of the HV still got to the forecasted amount… but that was courtesy of the deformation band that stalled out over the eastern HV, providing several hours of 2 to 3 inch per hour snowfall rates.  Anyone who was northwest of that snow band… saw substantially less snow.

The Catskills and western Hudson Valley on average saw 6 to 12 inches of snow.  That’s still a significant snowstorm by almost any standard.  But when you realize that the Catskills would have gotten 18 to 24 inches of snow, if the storm had tracked as guidance suggested… it’s a major change.  If you look at the two maps, the track the storm actually took was drastically different than what was projected just hours before the event.

This is why we always harp on the storm track being so critical.  If the track is further east or west than expected, it’s going to change the end position of the heaviest snow band… and if you live in the area being forecast… it could result in major increases or decreases to your snowfall amount the end of the day.
But it’s also why we can never be ‘certain’ about snowfall totals in a snowfall forecast.  There was no way to see this coming.  There was no data, no guidance that suggested that this storm would track 50 to 75 miles further south and east than expected.  By the time the storm was off the coast of New England, the storm was 100 to 200 miles further east than projected.  These changes happened in real time, as the storm was beginning, and all we can do is make the assessment, and modify the forecast as quickly and effectively… so you have the best information.

From a forecast perspective… we lucked out.  Because the storm still had a strong enough band of heavy snow push into the forecast area of the Hudson Valley.  It provided the 3 to 4 hours of 2 to 3 inches per hour, to get most of the viewing audience close to… or within the forecast range, to where the storm forecast was considered a success.  (Even if we had several people on Facebook yelling about how it was not snowing and the forecast was a bust… despite the fact that we told everyone the snow would not get heavy until the afternoon on Wednesday).  But our viewers in the Catskills certainly would have noticed a difference between the forecasted amounts… and what actually fell.  But hopefully, you at least understand why.

Thank you to everyone who helped us gather data through this storm.  You’re ALWAYS a tremendous help in now-casting any event.  The HVW community provides us with an endless stream of information, that gives us an advantage in forecasting any storm.  You guys are the BEST!  And now… on to the next one, as this recap was delayed because we’re trying to hammer out what will happen with the next nor’easter.  But that’s another conversation…  Thanks for the support!