A very icy 24 hours ahead for the Hudson Valley, as we track the approaching storm system that is currently bringing snow to Arkansas and Louisiana (Video of Heavy Snow in Louisiana).  So it feels a bit odd that it will bring ice and rain to the Hudson Valley.  An Ice Storm Warning is in effect for Orange county, and a Winter Weather Advisory in Effect for everywhere else.  For the base understanding of how this storm will unfold, we have a detailed discussion from Sunday’s post.  We’re going to discuss how the details have changed… but if you’re looking for a explanation of the storm setup, timing and details, please review Sunday’s Discussion…
Sunday Discussion : Wintry Start to the Week

This afternoon we have some light precipitation in the region, and most of its is falling in the form of freezing drizzle.

The bulk of the first round of precipitation is mainly in the form of snow, and is mainly north of the Hudson Valley.  In the valley itself, we’re seeing light sleet and freezing drizzle, with temperatures in the upper 20s to near 30°.  The Northern Catskills and HV are seeing some snow it seems, but amounts should be relatively light… a dusting to an inch in those areas.  The Hudson Valley should expect to see some patchy freezing drizzle and light sleet… but otherwise cloudy skies through sunset.

The storm system will move northeastward tonight, and push into western PA by midnight tonight.  That storm track will pull mild air northward, into the Hudson Valley.  That will cause any snow to change over to sleet and freezing rain… and possibly even rain further south.

A close look at the 6 hours from 7pm to 1am tonight… and a few things stand out.  The moisture doesn’t arrive until about 9 or 10pm, but similarly to the afternoon precipitation (light snow/sleet)… the bulk of the moisture may be focused north of I-84.  This could be good news for Rockland, Westchester and Putnam counties… where you could remain dry for longer, minimizing the icing in those areas.  From I-84 on north… it looks like the freezing rain and sleet begins between 8pm and 11pm… but may be rather light through midnight.  While the conditions through midnight don’t look as severe as originally projected… we still anticipate icy conditions for the entire region between 7pm and 1am tonight.

Futurecast Radar : 1am to 7am Tuesday

From 1am and beyond… you can see the sleet and freezing rain begin to push northward, and areas of plain rain slowly spread northward in the Hudson Valley.  Temperatures around the region slowly climb from the upper 20s into the low and mid 30s.  Here is an hour by hour look at the rising temperatures overnight.

Futurecast (Hour by Hour) Temperatures 1am to 7am

The lower Hudson Valley will be the first to rise above freezing… as early as 2 or 3am.  That should limit the amount of freezing rain accretion.  The Mid Hudson Valley warms from roughly 28° around 1am… to near 32° or 33° by 7am.  With temperatures a few degrees warmer, we may not see quite the severity of ice accretion in the Hudson Valley.  We always look for trends when focusing on a forecast… and the trend in the data over the last 24 hours has been for slightly milder air into the Hudson Valley.  This could make a significant difference for our viewers in Rockland, Westchester and Putnam counties… hopefully minimizing any icing in those areas. 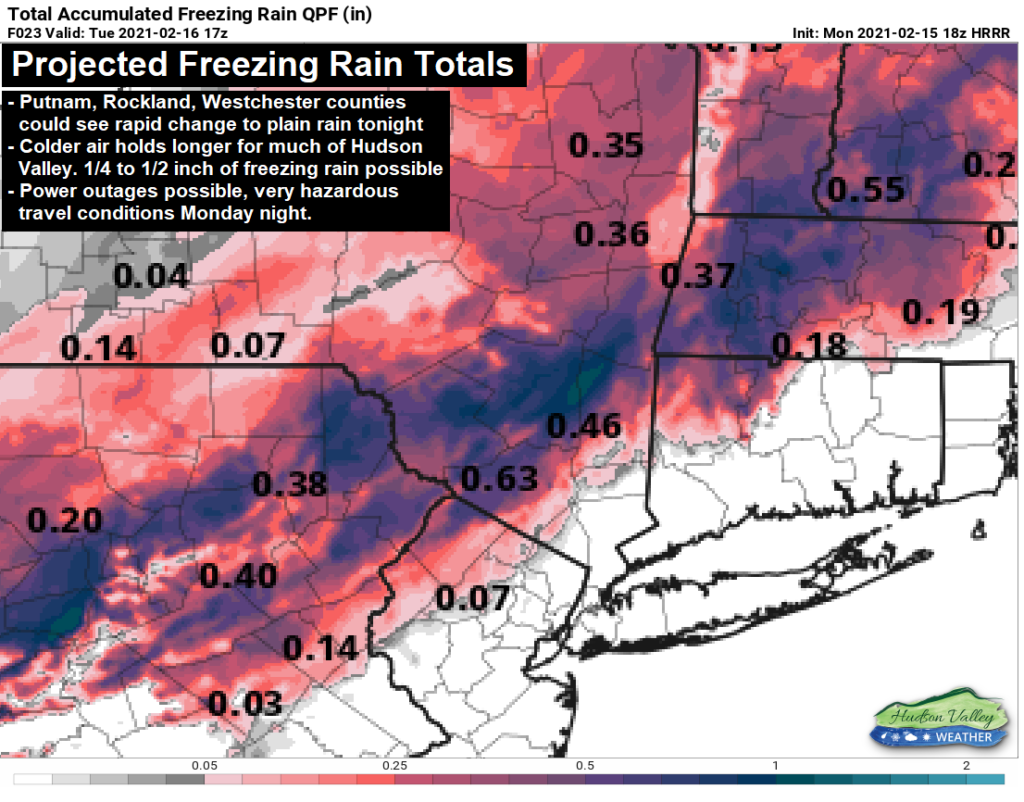 This image from the HRRR model, some of the best data we have, shows the projected freezing rain totals tonight.  The first thing that jumps out, is that much of Rockland, Putnam and Westchester counties do not show any ice accretion.  This is the result of those milder temps, just a degree or two above freezing… but warm enough to provide a plain rain when the heavy precipitation moves in.  So while we expect and are planning for ice in those areas… this could be some good news for those folks.

Unfortunately, The Mid and Upper Hudson Valley are not looking so lucky.  While temperatures are projected to be 2 to 5 degrees milder than models were indicating last night… temps are still expected to hold below freezing.  This will mean that rain will freeze on contact in many places, causing very hazardous conditions, and possibly leading to some power outages as ice accretes to tree branches and power lines.  We will be hoping that the temperatures can climb an additional couple degrees, but it does appear to be a very icy overnight for locations like:
– Port Jervis, Middletown, Newburgh, Poughkeepsie, Monticello, Ellenville, New Paltz, Kingston, Rhinebeck and other locations north of I-84. 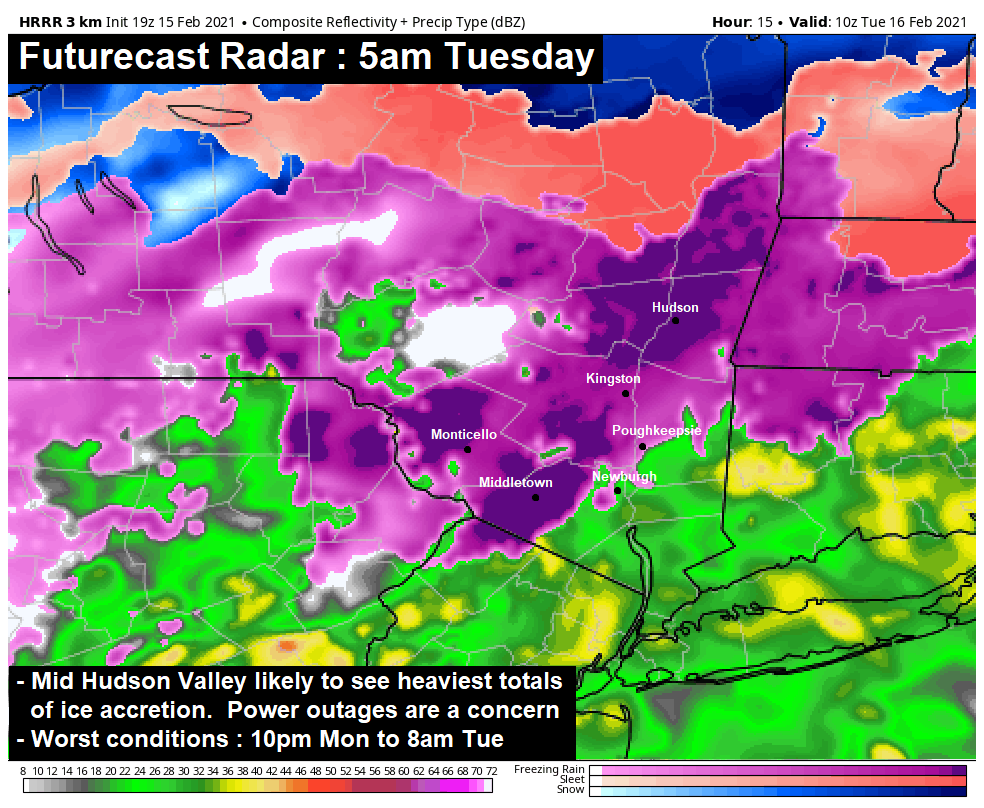 So even with the newest data showing milder air in the SE corner of the HV… you can see that as of 5am, a rather large portion of the Hudson Valley is still projected to see freezing rain (purple on futurecast radar) and temperatures 32° or lower.

It’s looking like a rather ugly night around the region.  While we are hopeful that our southernmost areas (Zone 8 & 9), most specifically Rockland, Putnam and Westchester Counties, are mild enough to see mostly rain, and not freezing rain…. we do not want to cause anyone to let their guard down.  This ice event will cause some power outages, lead to traffic accidents, and cause some considerable headaches.  We will share the radar images and discuss the precipitation as it nears tonight.  Let’s hope that the moisture isn’t as heavy, and that temps aren’t quite as cold tonight