The questions have been asked many times… “where is winter?”, and “is winter over?”.  We’ve tried to reassure everyone that it was only a matter of time before we had another shot at snow across the Hudson Valley.  So after several weeks of quiet weather, it looks like Tuesday we’ll get some widespread accumulating snows once again.

Timing (Tuesday):
– 9am to 1pm : Snow begins from SW to NE
– 1pm to 1am Wednesday : Periods of light to moderate snow
– 2am to 8am Wednesday : Light snow tapers off

Impact / Conditions:
– Steadiest snow likely at the onset, could fall up to 1″ per hour for a time
– By mid afternoon Tuesday, steady, lighter snow expected
– Temps in 20s, snow accumulates to all surfaces
– Tuesday PM and Wednesday AM commutes could be hazardous 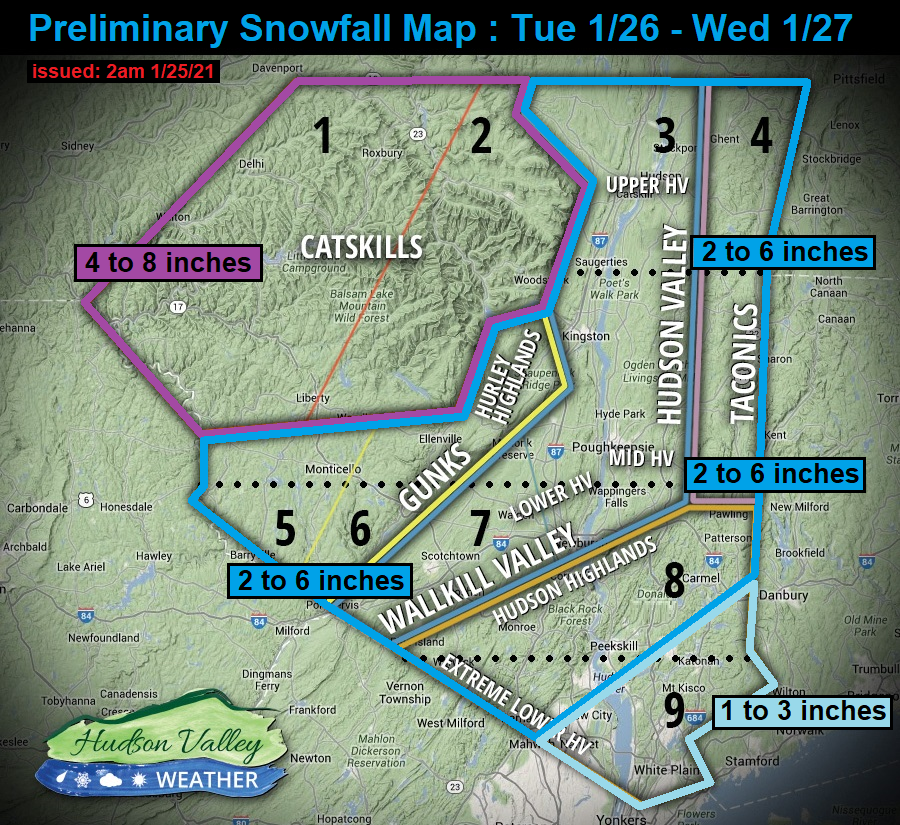 A storm across the plains states will push eastward on Monday, and slowly spread snow into midwest states.  But a weak area of high pressure over the eastern US will weaken the storm system as it moves east, and the result is a bit of an uncertain forecast for this storm.  Here’s the futurecast radar as it looks right now…

Futurecast Radar : 6am Tuesday – 1am Wednesday

The storm system is weakening as a band of snow is projected to develop into the Hudson Valley mid to late morning on Tuesday.  That band of snow could fall steadily for several hours, possibly mixing with sleet late in the day, before tapering off to snow showers.  As the weak low pressure falls apart, a secondary low develops near the coast and moves out to sea.  We’ll have to monitor where the light to moderate snow is at the that point… because it’s likely that the light snow falls for several hours, before weakening over our region and ending.  Even if you don’t have a great comfort level with weather maps, you can see this system looks rather disorganized, and relatively small in size.  This means minor changes could result in noticeable changes to our forecast and the end result of what we see.

For now, we’re thinking that 2 to 6 inches are possible… with much of the region likely seeing 2 to 4 inches.  But the details will determine if some of us could end up on the higher end of that range.  But based on the majority of data we have right now, a low of 2, 3 or 4 inch totals appear likely.

Beyond this storm, the pattern gets quite active.  We likely watch a storm system go out to sea, south of our region.  This will keep us mainly dry for Thursday (unless new information begins to suggest otherwise).  But then Friday and Saturday look bitter cold, as some of the arctic air from Canada, dives into the Hudson Valley.  Then behind the coldest air of the season so far… we will watch as another coastal storm takes aim for Sunday or Monday of next week, roughly 7 days from now.  That storm system, has the potential to deliver another moderate to significant snowfall.  Something we’ll have to keep our eyes locked on.

Check back with us late on Monday, and we’ll see if we have any updates on the situation.  Have a great day!