After a beautiful weekend around the Hudson Valley, we’ll see tranquil conditions continue for the next several days.  Northwest winds will set up for Monday and Tuesday, making it feel like early fall around the region.  Highs in the low 70s, and overnight lows in the 40s to low 50s.  By Wednesday and Thursday, the winds will shift back out the southwest, and that will give us warmer temperatures.  Highs in the upper 70s to near 80°, and lows in the 50s to near 60°.  The next chance for rain comes on Friday, as the remnants of Tropical Storm (soon to be Hurricane Sally), get caught along a cold front that could sweep through our area.

Not much in the way of rainfall the next 5 days. 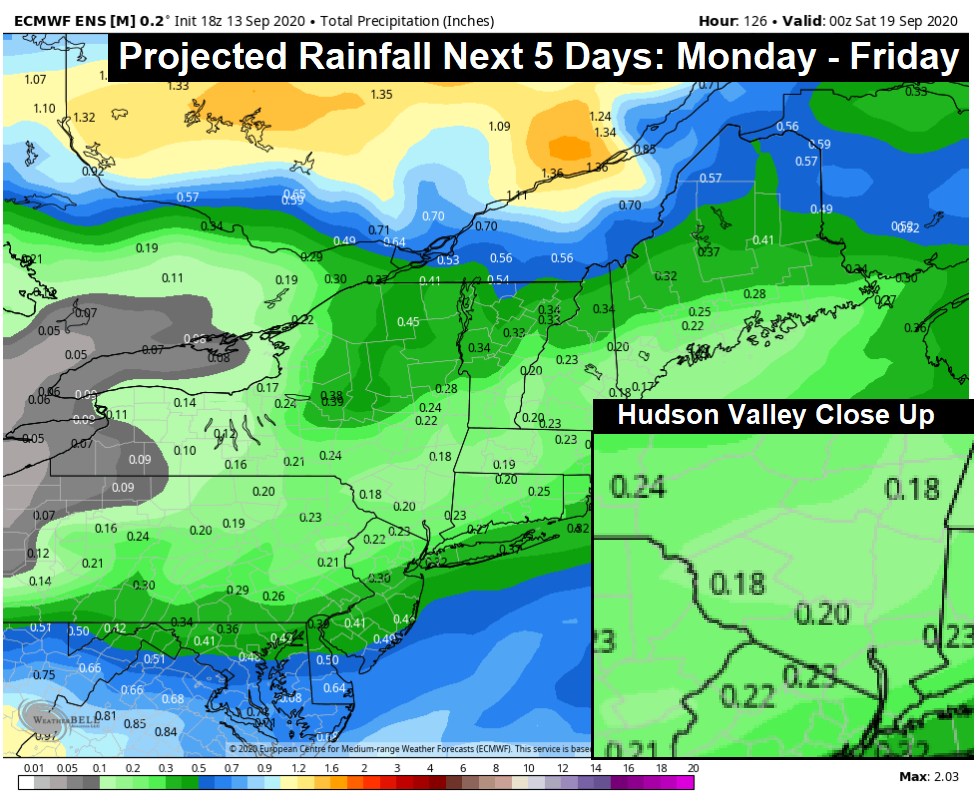 The above rainfall projection is from the European ensembles, between Monday and Friday.  In short… not much.  As we mentioned at the top, the rainfall we see here, is from Friday, and the guidance is split on the track of Friday’s rainfall threat.  But the odds are good that the focus of the rainfall stays south of us, near Washington DC and Baltimore.  Drought concerns continue in the community, as we hear many claims that urgent rainfall is needed.  While we surely could use some more rain, it’s dry… but not abnormally dry in New York State. 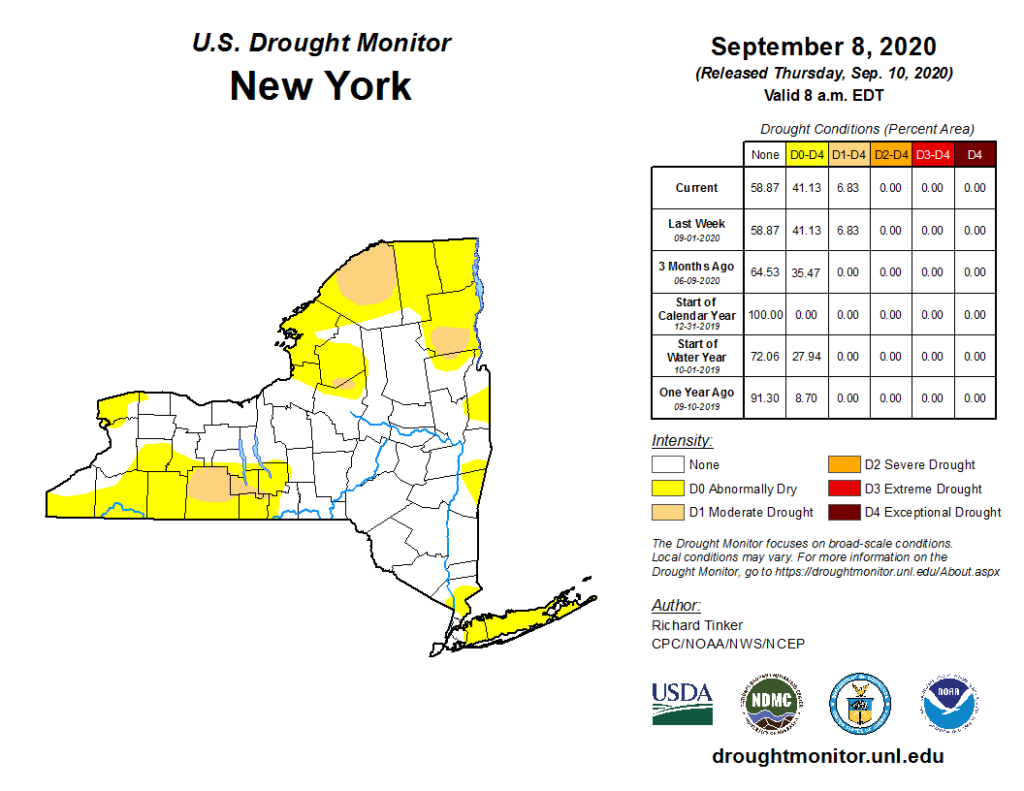 We’ll have to watch and see if this worsens due to the dry conditions of the coming week.  But in short… a rather nice week of weather for the region, with our next shot at rainfall coming on Friday.

The tropics have really gotten active over the last week or two.  This map shows us all the active storms, as well as the areas of high risk of tropical development. 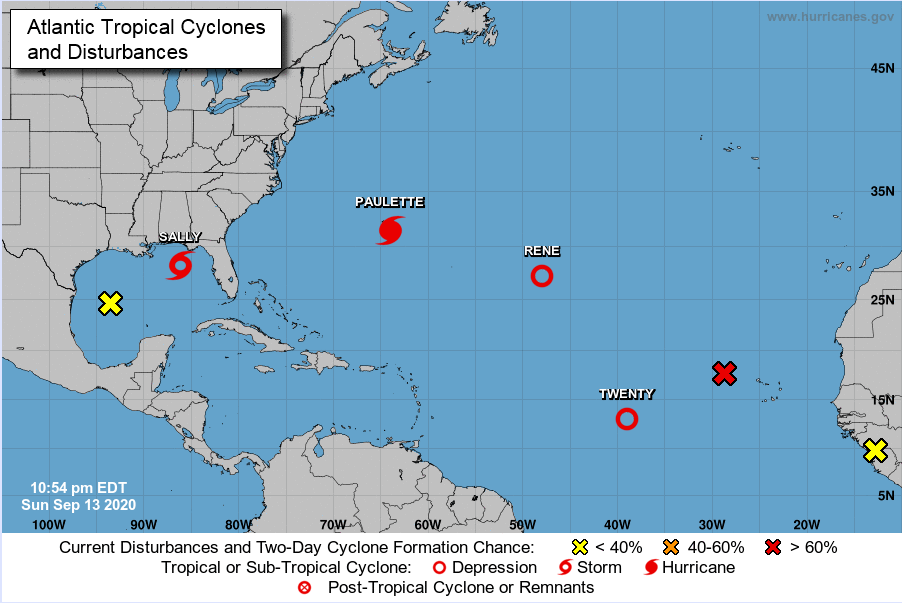 Hurricane Paulette and Tropical Depression Rene are no risk to the US mainland.  Hurricane Paulette however could bring damaging winds to Bermuda, as it heads northeastward out to sea.  That could be very bad news for our friends in Bermuda.  Rene is falling apart, and Tropical Storm Sally is heading toward the southeast coast.  But you’ll also notice 2 low chance areas for development, 1 high chance for development off the coast of Africa, and a Tropical Depression that will push westward.  A total of 7 disturbances or storms in the Atlantic basin right now.  But we’re going to focus on Tropical Storm Sally, because it has the potential to cause significant damage in the New Orleans area. 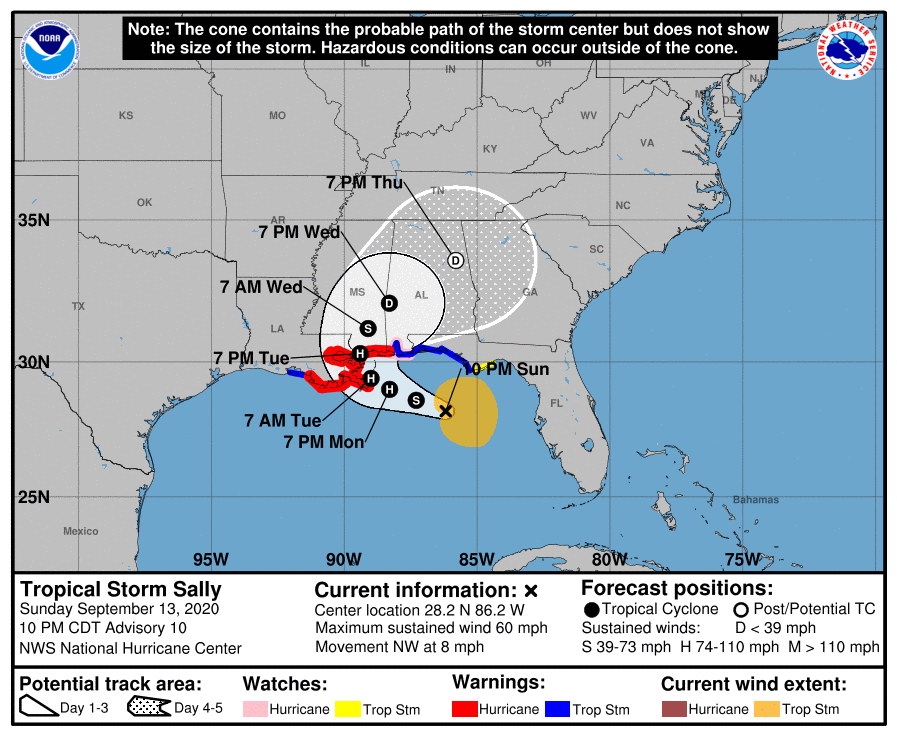 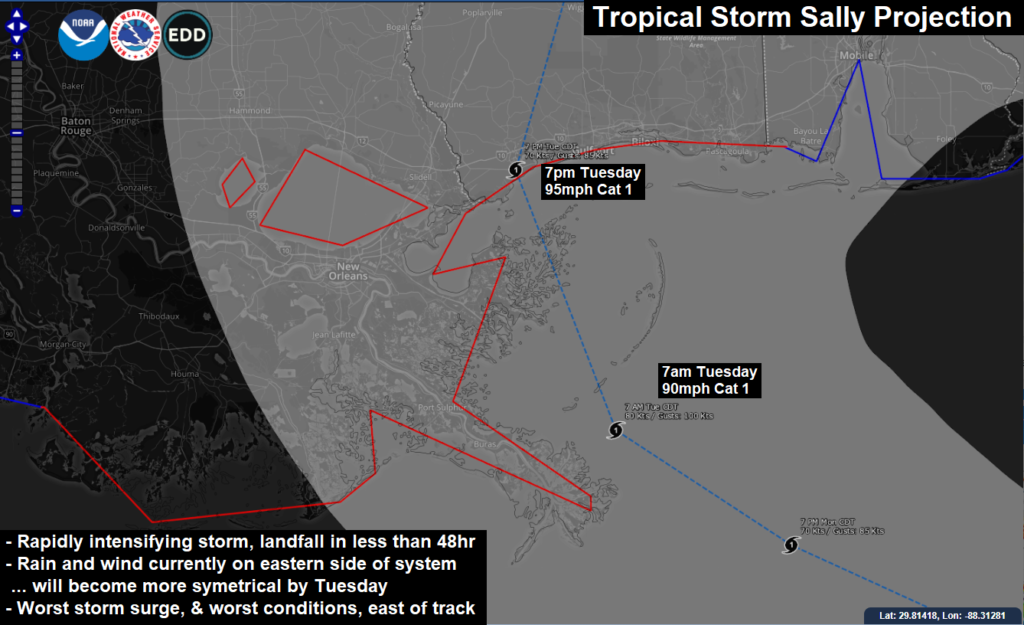 Tropical Storm Sally is a 60mph storm as of 11pm Sunday night.  You can see the closeup track projection takes it just east of New Orleans as a category 1 storm.  The further east this storm tracks… the better the scenario for much of Louisiana.  Due to the curvature of eastern Louisiana, when the counter clockwise winds of a tropical storm wrap around out of the east… storm surge over 9 to 12 feet can’t be ruled out.  We will continue to hope for a storm the pushes further and further east, away from the most densely populated areas.

To understand the potential impact of the storm in the southeast, lets look at the projected sustained winds and rainfall totals. 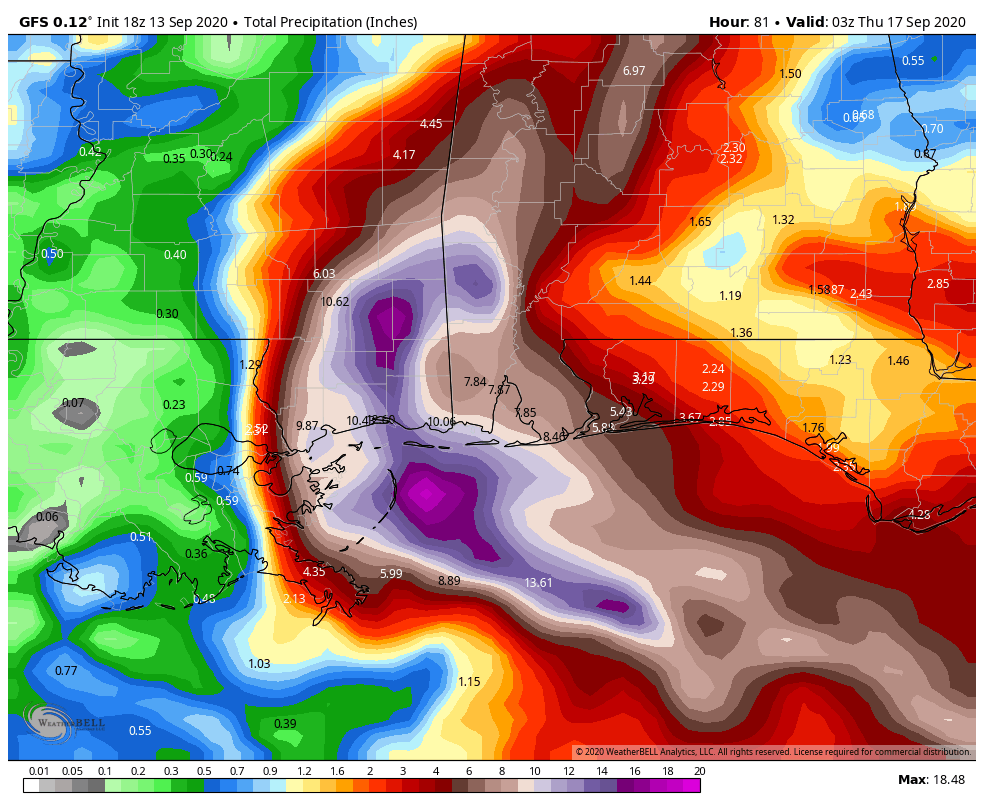 Look at the dramatic cut off of rainfall amounts with Hurricane Sallie.  The storm is not evenly weighted, meaning the heaviest rainfall and wind is currently east of the center of circulation.  This simulation has roughly 0.75″ of rain in New Orleans… but if we go 50 to 100 miles east of New Orleans, rainfall totals of 10 to 15 inches is possible.

As a result, the track is critical for flooding concerns, because the same areas where the heaviest rainfall is found, are where the best chance for a deadly storm surge over 9 feet is possible.  We will do our best to monitor the situation as it get s closer.  For now, our weather locally is quiet… thoughts go out to our friends in Louisiana and Mississippi.

Have a great start to your week.

1 thought on “Monday Discussion : The Week Ahead / Tropical Storm Sally”