One thing is for sure, since November 1st, the pattern has become much more wintry.  Temperatures are about 5 degrees below average after the first 10 days… and things are about to get more wintry around the region.

You can see on the radar simulation, that all of the action is off to the north and west of the Hudson Valley until after midnight.  That’s because the frontal trough will hold to our west, providing the focal point of heavy snows well to our west.  Areas like Buffalo, Syracuse and the Adirondacks will see their first significant snowfall of the season.  However, in the Hudson Valley… it’s more of a reminder that the transition toward winter continues.  As the morning commute begins near sunrise… many areas may still be a cold rain. 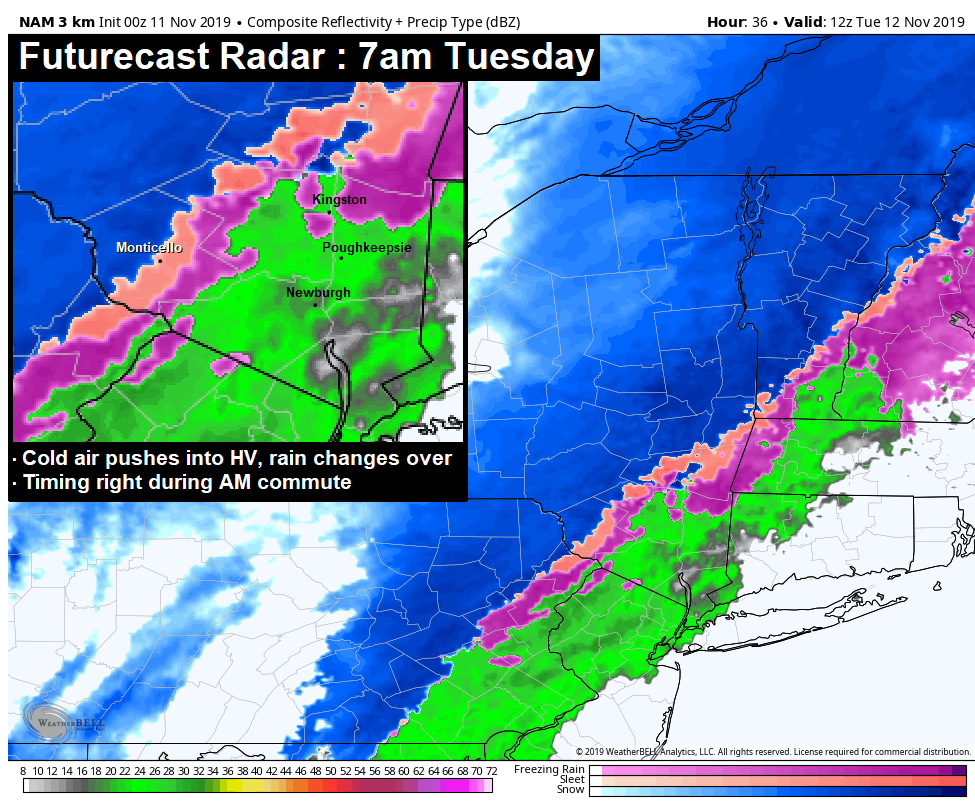 You can see on the closeup shot, that the Catskills and upper HV will be the first to change over as the cold air sinks in at all layers of the atmosphere.  The transition should occur rather quickly, with rain showers becoming a period of steady wet snow.  Temperatures will be in the mid 30s where it rains… and in the low 30s where the transition to wet snow and sleet occurs.  Untreated roads could become slick and icy if a burst of snow occurs, which is likely… especially in the northern half of the HV. 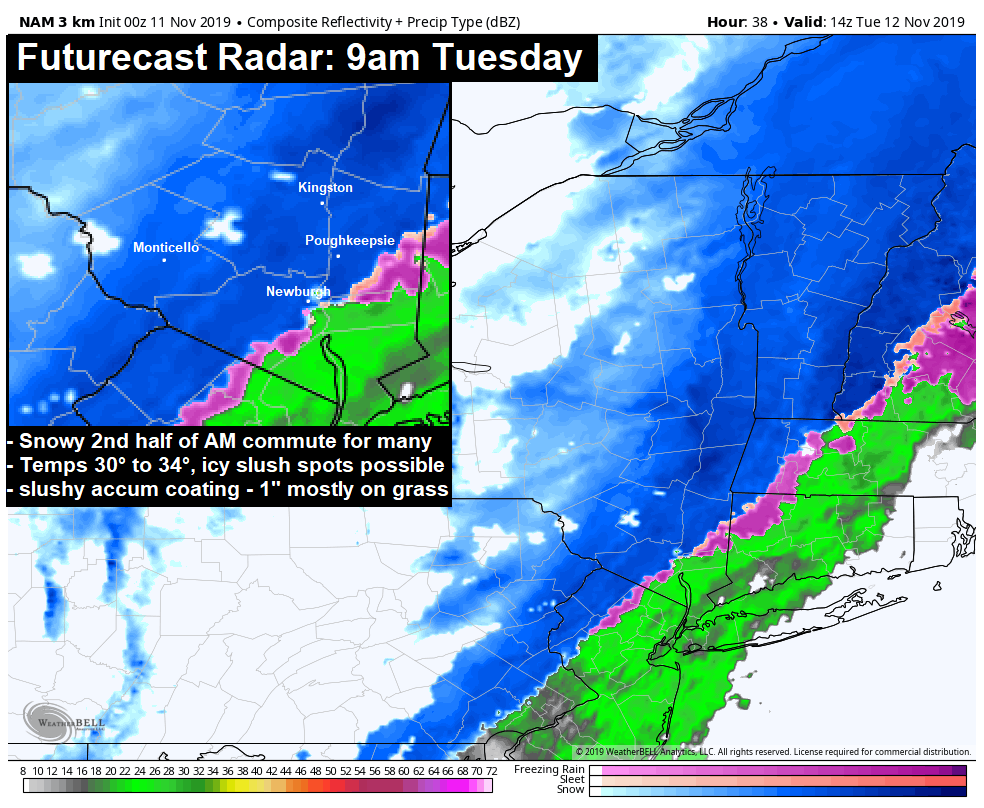 As the commute continues, by 8am and 9am, the rain/snow line continues to push SE into the valley.  Many kiddos will head off to school in the falling wet snow.  Temperatures will initially be above freezing, so roads will start just wet.  But areas well north of I-84 could see the best chance for icy and slush covered roads.  This rain/snow line will push through the region rather quickly… and by 12pm, it’s pretty much over for everyone.  So it’s a quick transition from cold rain… to wet snow… to over. 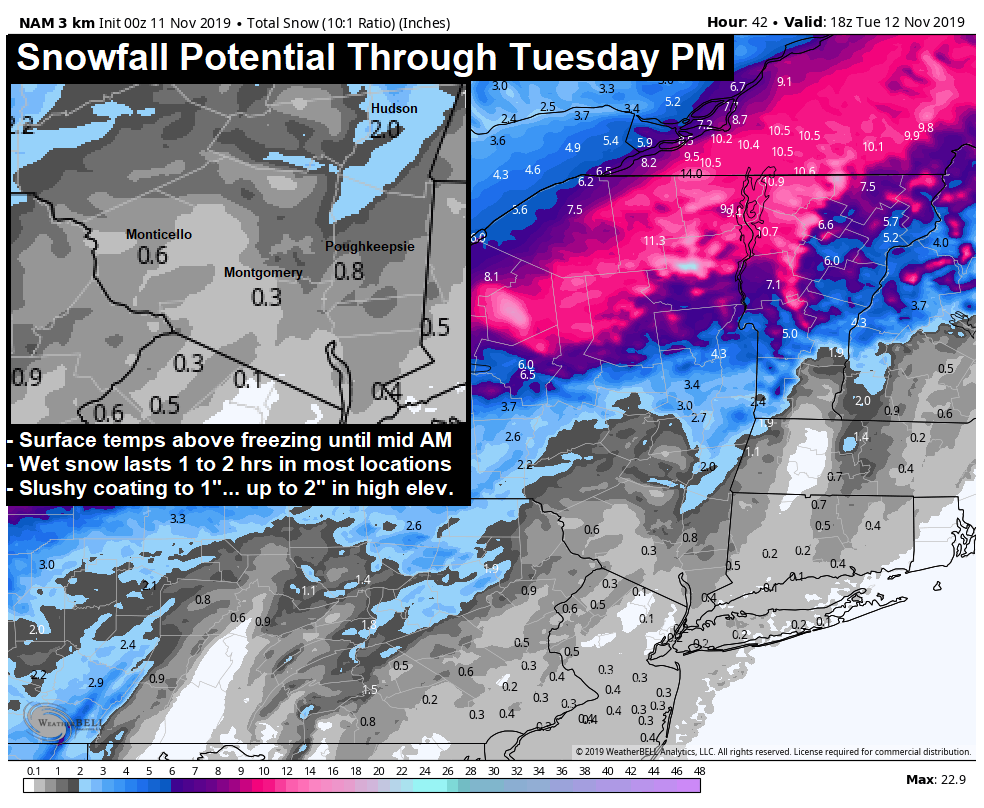 Total snowfall amounts will generally be a trace coating on grassy surfaces, up to a half inch or so in some colder spots.  The higher elevations could see an inch or two, and also the best chance of icy roadways.  But even in the valley, temps will tumble by mid to late morning, with most locations being in the low 30s.  That could result in some icy travel conditions for the late morning commute.  But as things dry out… the PM commute looks much better.  With a few breaks of sun, temps in the low to mid 30s, should dry any road surfaces, and give us a safe but cold afternoon commute on Tuesday.

We’ll have another discussion Monday night… but the chances of a major change in the forecast are quite low.  This is a high confidence forecast.  We really want to exercise caution with the Tuesday AM commute, as rapidly falling temps into the low 30s and a burst of snow, just as kids are getting on the bus and travelling to school… could cause a few extra headaches.  Have a good Monday, and we’ll have more updates tonight. 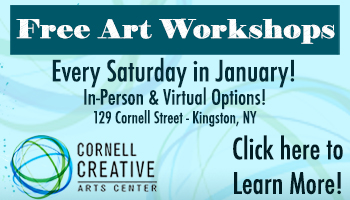