After some light snow on Monday, our full attention is now on our first significant winter storm threat of the season.  This storm is likely to be a major snowstorm for parts of the northeast, the big question on everyone’s mind… is will that include the Hudson Valley.  This being our ‘preliminary’ forecast, we will be honing in on the details as we get closer. 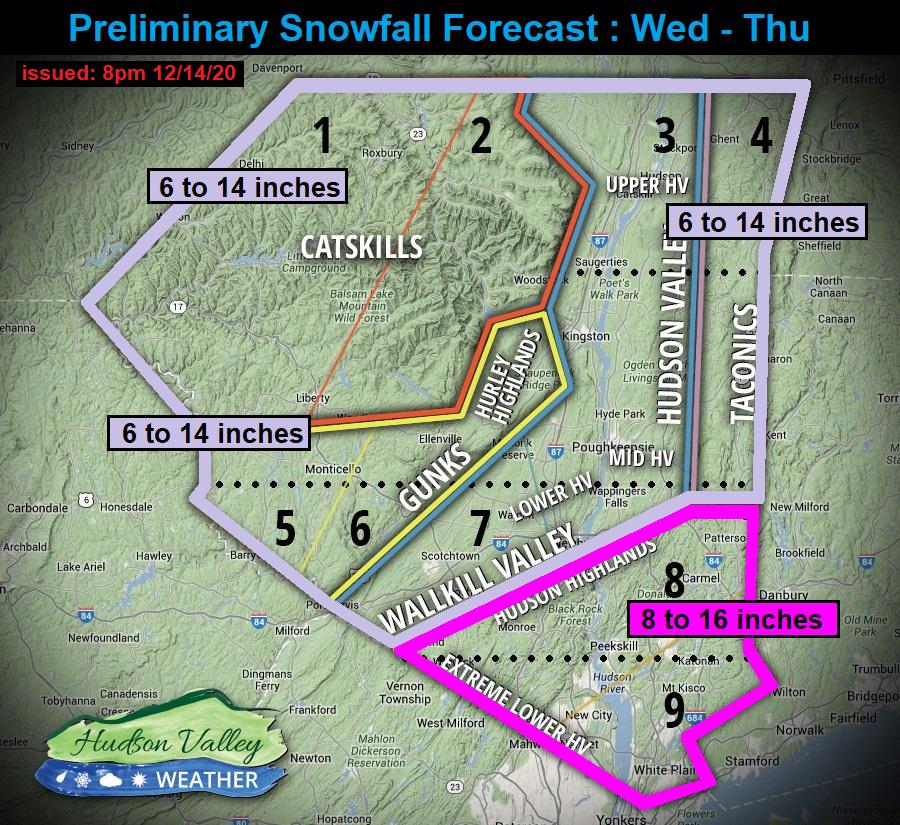 ** Key Factors:
– Strong high pressure to our north, will force storm eastward into the Atlantic Ocean.  How far north storm progresses is critical to forecast
– Sharp cutoff on northern edge of snow is possible… hence large snowfall range.  Tight gradient between areas with 4 or 5 inches, and 10 or 12 inches

A tricky forecast ahead, which is what you expect when we’re talking about coastal winter storms.  Low pressure will form off the coast of Virginia, and move northward Wednesday afternoon.  Warm, moist air associated with the storm, will be pulled northward over top of a cold Canadian air mass.  The result will be heavy areas of precipitation breaking out. 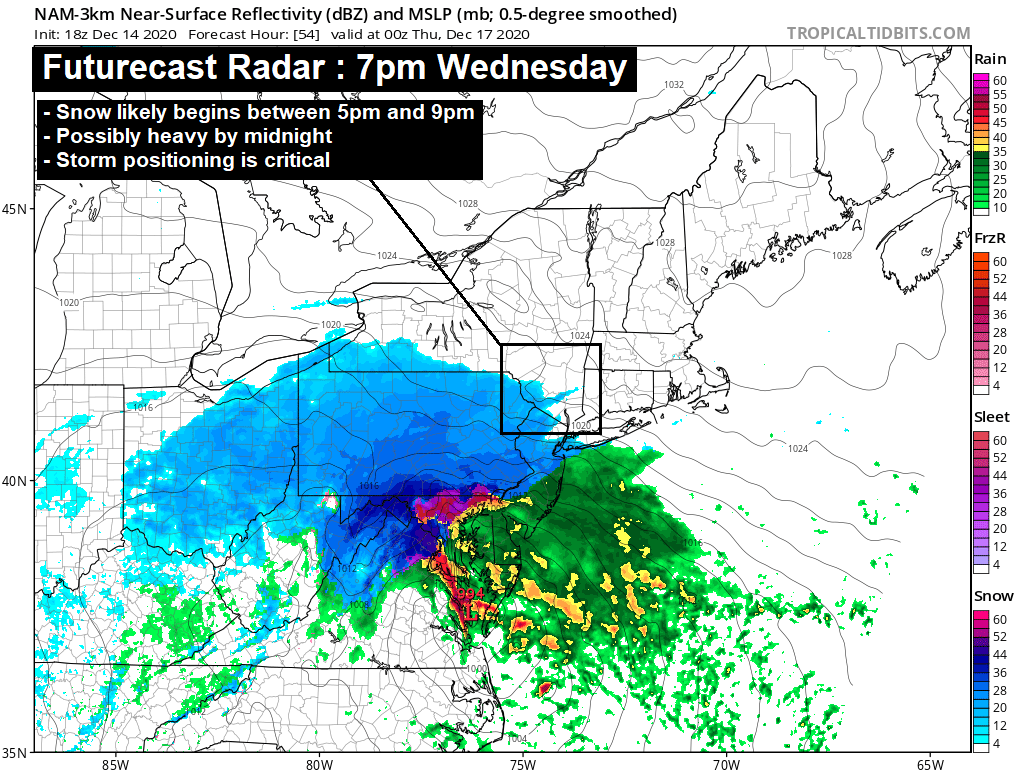 The biggest challenge with this forecast has to do with the low pressure position, and how far north it can move, before the strong high pressure over southern Canada halts the storms northward progress, and forces the weaker low pressure eastward.  As you can see from the futurecast radar, there will be plenty of heavy snow on the northwest side of this system.  Places like central PA will all but certainly get a foot or more of snow.

However the guidance is split on the exact track of the low pressure system.  The GFS (American) model pushes the storm eastward fastest… and as a result, it suggests that the band of heaviest snow runs through NYC, and the Hudson Valley would be on the northern edge of the snow shield.  The European model and Canadian models suggest the low pressure makes it a bit further north, and pushes the axis of heaviest snow into the Mid-Hudson Valley.  Where the heaviest snow falls with this system… well in excess of 1 foot is possible.

To be conservative, and because we are uncertain of exactly how this system will track… we have a large snowfall forecast range for the preliminary forecast.  6 to 14 inches for most of the viewing area, due to the uncertain northern cut off of this storm system.  If the GFS model’s idea is correct… and this storm pushes east earlier… then areas north of I-84 would likely be closer to the 6 inch totals.  However… if some of the other guidance is correct, like this NAM model image… 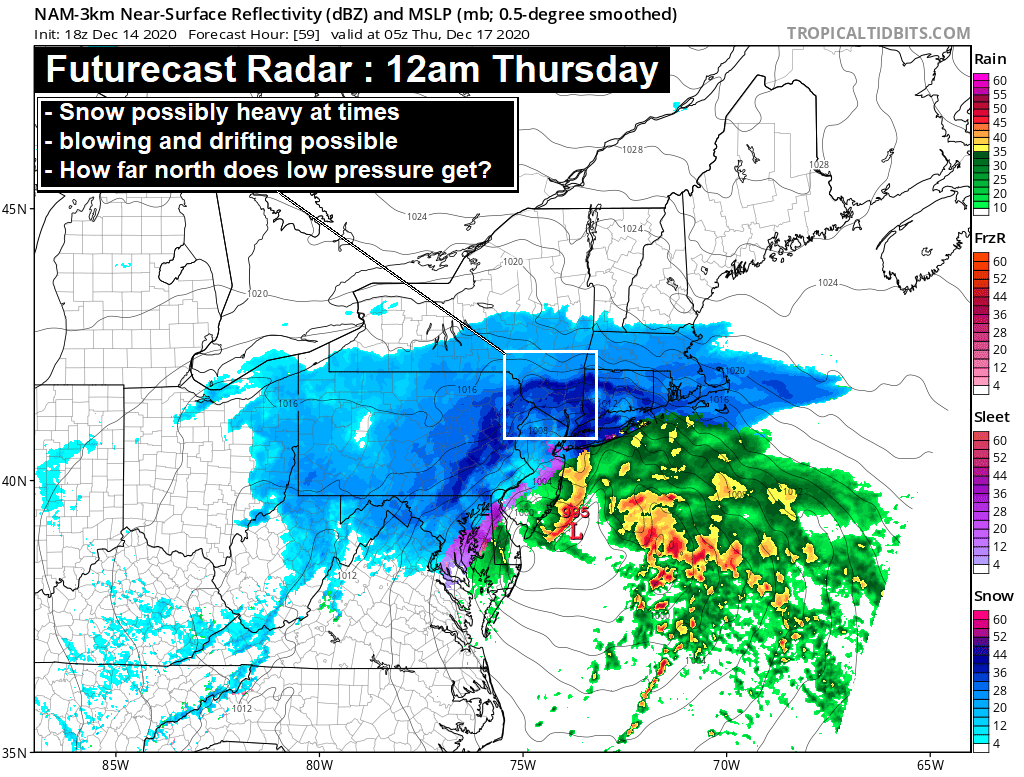 … then the northern half of the Hudson Valley would be closer to the 14 inch side of the forecast.  If this scenario shown above is correct, then we can’t rule out snow totals even higher… however, for the moment… our 6 to 14 inch forecast is what we’re going with.  Locations closer to NYC are likely to be in the heavier bands of snow, regardless of which solution turns out to be correct.  As a result, we have higher snow totals forecasted in the lower Hudson Valley.  Pinning down the exact track is going to be critical, because this storm has a lot of moisture available… and there is an abundance of cold air available.  Those two ingredients can combine for some very high snow totals, so we are watching the details closely.  As the storm pushes northeastward, we will see some incredible banding of the snow (you can see the deep blues on the map above).  Within those bands, snowfall rates of 2 to 3 inches per hour are possible.  So it will be critically important to snowfall totals, to identify where those heaviest bands will pass through.

A very busy Tuesday and Wednesday are in store for Hudson Valley Weather.  We hope you’ll continue to track this storm with us, as we get closer to the event on Wednesday night.