Half way through the month of December, and the winter season has gotten off to a quick start, with another winter storm on the horizon.  There are some changes to how this storm will play out.  This storm will not be as strong as it initially appeared, making freezing rain less likely for the HV.  In addition, it looks likely to start quite a bit later than originally believed. 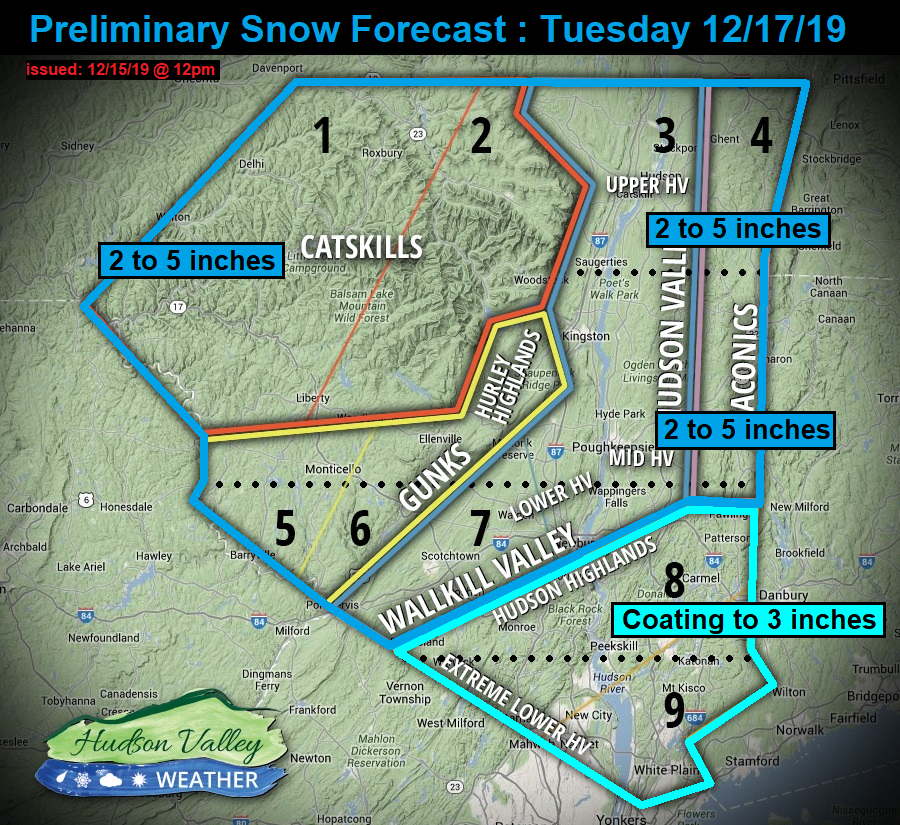 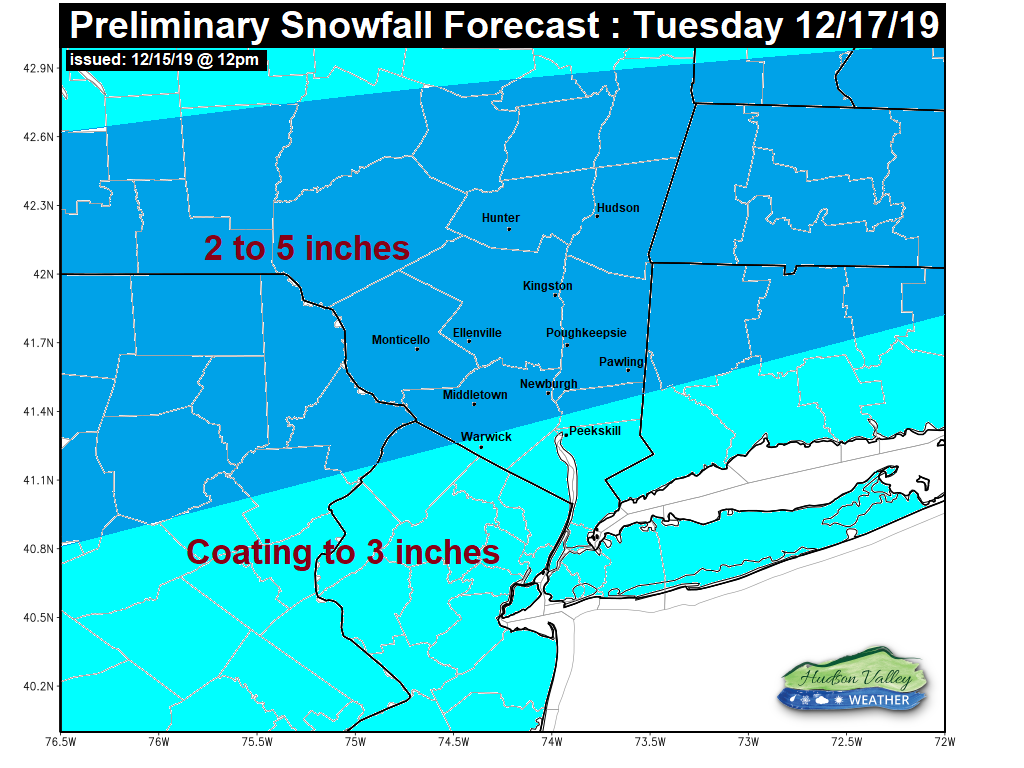 When this storm first appeared on guidance, it looked to have major potential.  5 days ago, the computer models were suggesting a foot of snow was possible.  Then about 3 days ago, the models trended further north… and it appeared very likely that we would see a snow to ice to rain scenario.  However, in the past day or two, the models have caught on to the idea that this storm will be weaker than originally projected.  The side effects of that adjustment, are 2 fold:  It means less warm air… and less total moisture to work with.  So lets take a look at the current setup for this storm, and how we expect it to unfold.

This futurecast loop explains why the start time has now been pushed back until after midnight Monday night.  Early on Monday, a band of overrunning snow breaks out over Ohio and Pennsylvania, pushing eastward.  However the main energy from this storm is so far away (Tennessee), that the dry air at the mid levels over the Hudson Valley holds.  The result is the snow band falls apart Monday afternoon, and except for maybe some snow showers south of I-84 Monday afternoon… the first wave of snow does not reach our area. 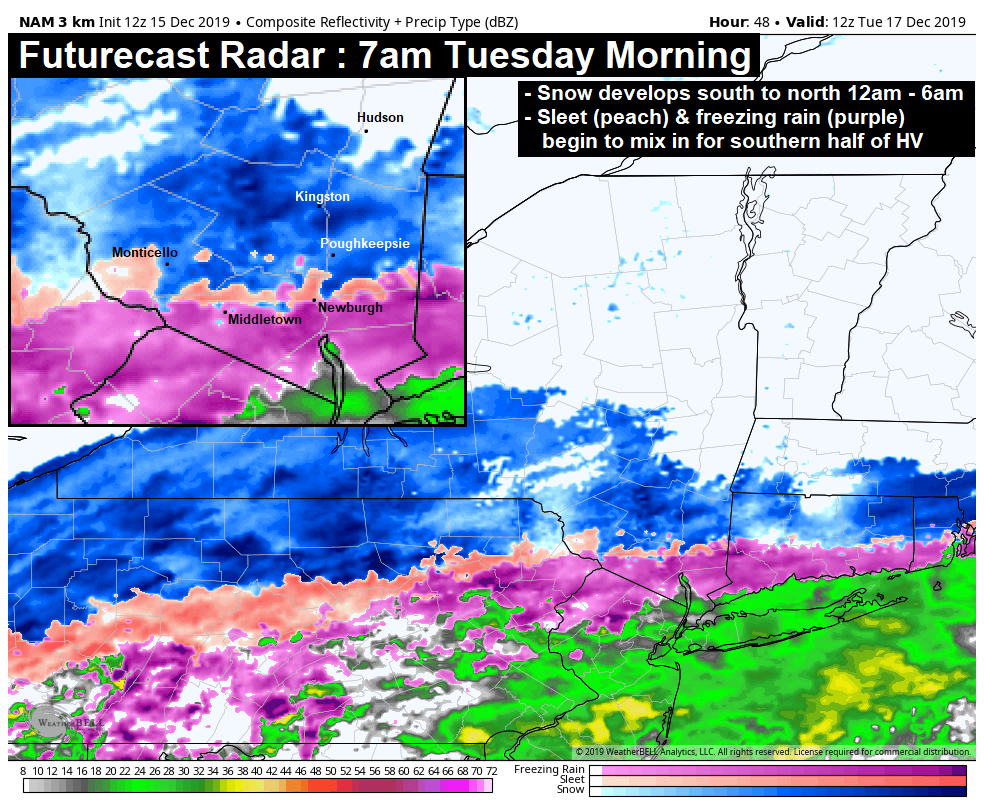 Finally after midnight, the moisture begins to push northward, into the Hudson Valley.  This will make for a very nasty Tuesday AM commute.  Everyone will start out as snow, but the precise details on how far that snow/mix line pushes north, remains to be seen.  Latest guidance has pushed this snow/mix line further south.  At this time, the best bet for all snow is areas north of I-84… and areas from I-84 on south, are likely to mix with and change to sleet and freezing rain for a period of time Tuesday morning into the afternoon.  Expect a good number of school delays and cancellations, due to the timing of this event and the likelihood for snow and ice accumulation.

For planning purposes, due to the limited moisture this system will possess, an all snow event does not mean significantly higher accumulations.  We’re starting out with 2 to 5 inches for areas where it stays mostly snow… and a coating to 3 inches where sleet mixes and changes over.  The snow/sleet and freezing rain should begin to exit the Hudson Valley between 12pm and 4pm Tuesday afternoon.  However, if the snow and ice linger into the mid and late afternoon, it could cause complications for the Tuesday PM commute… something to keep in your mind.

Again, this storm isn’t about the amount of snow and ice… we expect roughly 0.5″ of liquid precipitation.  It’s the combination of accumulating snow and ice accretion, during key times of the day, that could cause rather large headaches around the region.  We’ll target releasing the “Final Storm Forecast” on Monday morning, since this storm’s start time is now around midnight.  Have a nice Sunday afternoon!