Yesterday was an eventful day across the Mid-Atlantic and Northeast. Tropical storm Fay made landfall just north of Atlantic City, New Jersey with winds of 50 mph. Interestingly, Fay made landfall within miles of the same location as Irene (2011) and Sandy (2012). Coastal portions of Maryland, Delaware, and southern New Jersey took the brunt of the storm, where some locations received upwards of 5 inches of rain, resulting in widespread flooding.

The Hudson Valley received anywhere between 1-3 inches of rain, with locations west of the Hudson River generally receiving the highest totals. Fortunately, due to previously dry conditions, most Hudson Valley reservoirs were able to handle the water, resulting in only minimal flooding.

As we all know, mother nature never takes a break. Now that tropical storm Fay has moved out of our region into Canada, today will feature a severe weather threat across the Hudson Valley. Hot and humid conditions will remain along with an approaching upper-level trough approaching from the west. We will also experience the highest dew points so far this year, which will be well into the mid-70s. ‘Real feels’ will be well into the mid-90s in many locations, which has prompted heat advisories for the mid-Hudson Valley. Combined, this will result in the chance for afternoon and evening thunderstorms, some of which could be severe. Current model guidance suggests storms will develop between 1-4 pm and will persist through sunset. The Storm Prediction Center has placed the entire region in a marginal risk (level 1 out of 5) for severe thunderstorms. The main threats will be large hail, damaging winds, and frequent lightning. Also, with the ground already saturated from yesterday’s rainfall, isolated flash flooding may become a concern with any stronger storm.

Simulated radar for this afternoon & evening: 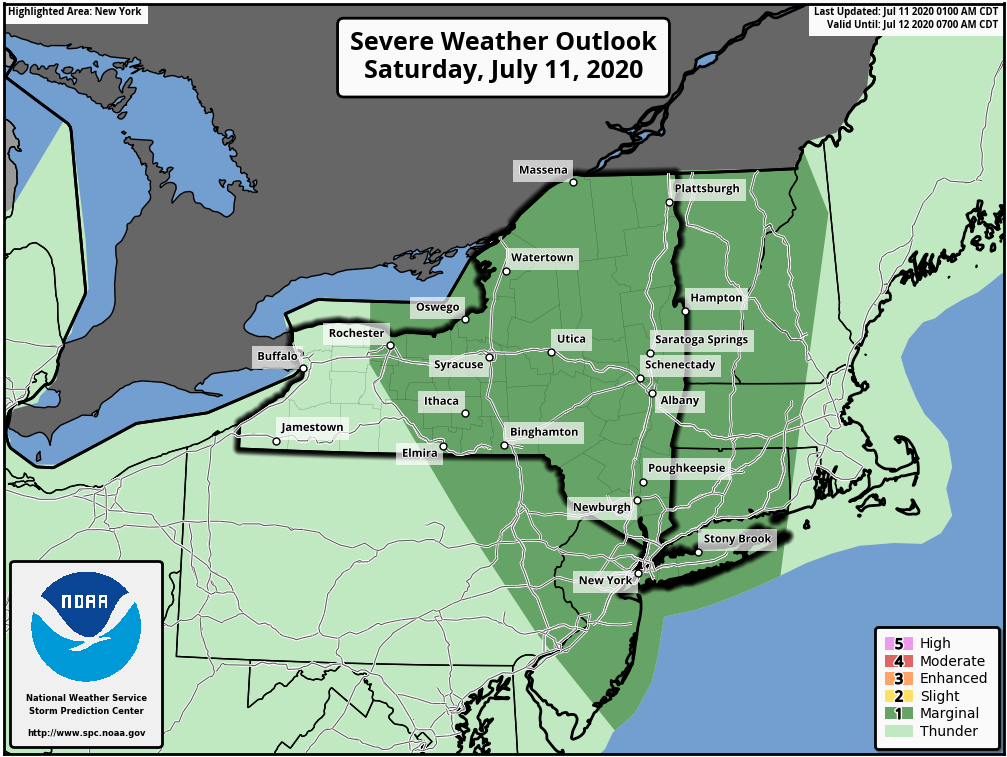