The historical peak of the Hurricane season is September 10th. So, since it is 2020 after all… the tropics flirted with the idea of giving us 2 hurricane landfalls in 24 hours along the Gulf Coast. Thankfully, as we’ve gotten closer, the threat is looking less ominous for at least one of the systems. 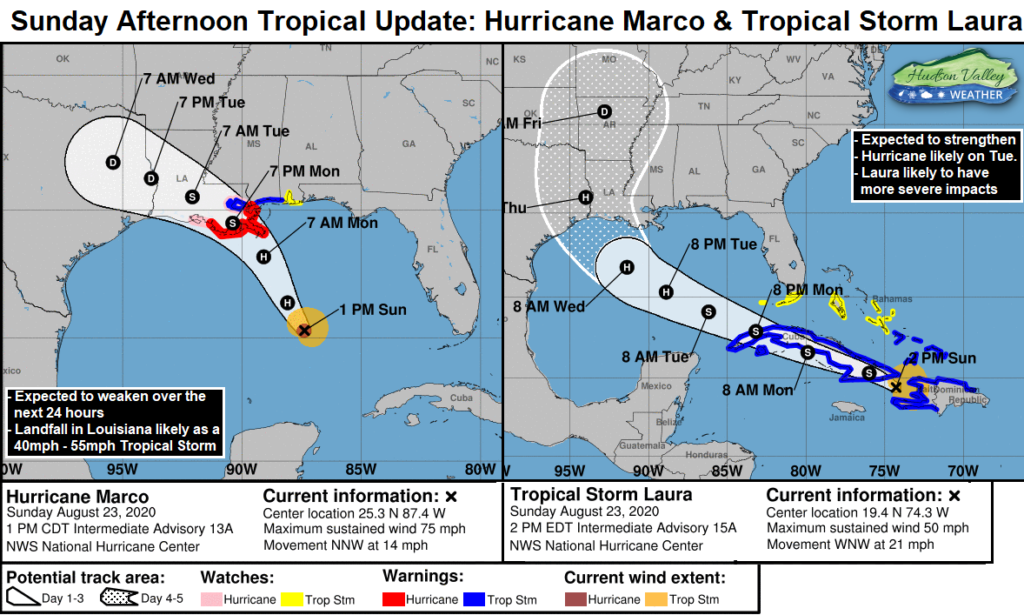 HURRICANE MARCO
Hurricane Marco has maximum sustained winds of 75mph with a central pressure of 992mb. There isn’t much between Marco and Louisiana, which is ominous for the folks in that area. But there is a decent amount of atmospheric shear north of Marco, that hopefully will serve to prevent Marco from strengthening, and hopefully even weaken into a Tropical Storm. Computer guidance also likes the idea of Hurricane Marco weakening into a tropical storm, as it pushes for a landfall between Houston, Texas and New Orleans, Louisiana. We’ll have to watch and see if the wind shear does it what we think it will… and spare folks a hurricane land fall by Monday night.
TROPICAL STORM LAURA
Tropical Storm Laura is a disorganized system, with maximum sustained winds of 50mph and a minimum pressure of 1004mb. Laura has a lot of convection, but it’s not organized around the center of rotation. It brought considerable rainfall to Puerto Rico, as it now heads for the Gulf of Mexico. The conditions for development out ahead of Laura are much better than what Marco will face. As a result, Tropical Storm Laura is likely to intensify into a hurricane by Tuesday, and could become a major hurricane as it pushes once again toward the Gulf Coast. This is the greater of the two threats for certain, even though it’s currently the weaker of the two systems. It bares close monitoring over the next couple days, and anyone in the area from eastern Texas, to the Florida panhandle, should be taking steps to prepare now.
Futurecast Winds in Gulf of Mexico : Sunday Night through Wednesday Night

Marco is the system in the Gulf of Mexico at the start of the GIF… Laura is the system that tracks in behind it about 24 hours later.  These two tropical systems will be the main weather story for the US over the next 48 hours. Let’s hope that the guidance is correct on Hurricane Marco… and that Hurricane Laura does not intensify as much as some of the guidance is suggesting. More updates as we get closer…