In a winter that is quickly losing its shine… we are tracking another storm system for the coming weekend.  If you’re a snow lover… you’re watching as the snow potential for Saturday has gone up in smoke… quite literally vaporizing into thin air over the course of 24 hours.

If you’ve been following HVW the past 3 days, you’ve likely become aware of a potential storm threat for Saturday into Sunday.  We highlighted the concern, because of it’s potential (if occurring), to drop a significant snowfall on the Hudson Valley.  The GFS model had a 6 to 12 inch snowstorm over the region, beginning Sunday and continuing through Tuesday.  The European model caught onto the idea by Monday night…

An upper level low pressure is expected to develop and push east across the Ohio Valley on Friday and reach our region by Saturday morning.  Temperatures on Friday are expected to be in the low to mid 40s… so for snow to fall, we needed a little magic to happen.  That’s where the upper level low or ULL comes in.  It can be seen by looking at the blue height lines in the map above… starting in Kentucky and bowling balling its way over Long Island by the last image.  The ULL would create its own cold air, pulling cold air down from the upper atmosphere.  Anyone north of that ULL would see snow fall, heavily at times.  In this simulation, that included anyone north and west of NYC.  The end result would have been a foot of snow in some parts of the region.

But if you’ve gathered by now… that’s not going to happen.

Instead, what has happened, is that over the course of Wednesday… computer guidance began to lock in on the idea that this ULL will not push east… but rather northeast.  This changes everything.

If you follow the same blue height lines on this simulation, you’ll notice the blue circle… the ULL or upper level low… is hundreds of miles further north.  This will allow mild air up the Hudson River valley, and basically eliminate all chances of snow for the region.  This simulation depicts rain… not snow… falling across the Hudson Valley on Saturday. 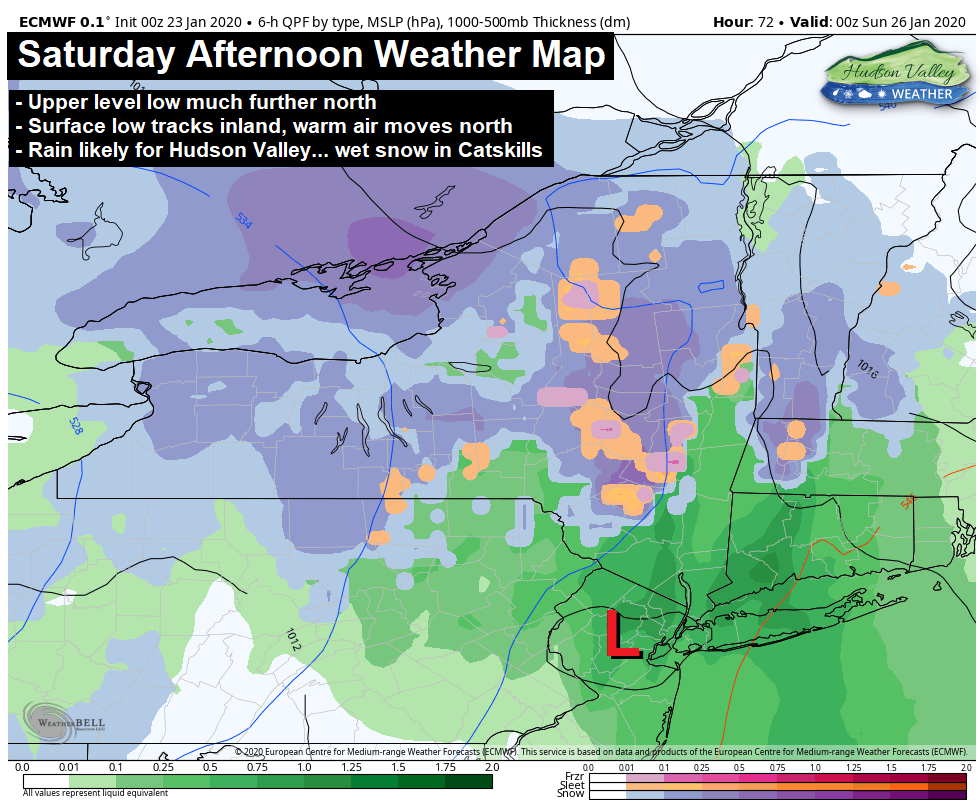 Depending on the exact track of the surface low that will develop… it may even be mostly rain in the Catskills.  The timeline would be rain for Saturday morning into afternoon… tapering off before sunset then drying out.  Great news for anyone with plans this weekend for sure!

This is a dramatic change of events on the computer guidance in a short period of time.  It’s also a perfect example of why, if given the choice, we wouldn’t talk about these type of storms in a forecast context… until inside of 4 days before the event.  Because in this case, that’s about when the models locked in on the idea that this upper level feature would be about 200 miles further north… changing the potential from 12″ of snow… to 1 inch of rain.

As mentioned… this is excellent news for the dozens of people who have voiced concerns about the coming storm for this weekend.  So many people have parties, travel plans, family coming to visit, etc… so for all of those individuals, this is an excellent turn of events.  But for the snow lovers… the ‘winter weather warriors’… this feels like a punch in the gut.  Days of computer model snowfall maps that suggested over 12″ of snow for the Hudson Valley… vaporized in 24 hours.  If this was the first time this winter… it would be a shrug of the shoulders, and move on to the next one.  But this has been a recurring theme, that reared its head just last weekend.  A widespread 3 to 5 inch snow event around the region, the first in 45 days… was a FAR cry from the 12″ of snow that models were projecting 7 days in advance.  If you’re noticing a trend, you’re not wrong.  At least a half dozen times this winter, guidance has teased a major snow event, only to wipe it from existance in the days leading up to the potential.

Then there’s the mirage of a pattern change, that most of you don’t even know about.  About 10 days ago, guidance suggested a major change in the overall pattern.  Sustained cold air was expected in the eastern US to close out the month of January, with several chances at snow being possible.  But in the course of 3 or 4 days… while we were forecasting the snow event from last weekend… guidance shifted dramatically and pushed that cold out into the Atlantic Ocean, and gave us the pattern we’re seeing this week.  A cold start (but not bitter)… followed by moderating temps and above average temps expected by the end of this week.

Combine all of that, with the overall pattern projected for the next 7 to 10 days, and the prospect of not seeing another accumulating snow until we flip the calendar to February, is a very real possibility.  As a forecaster… it feels like you’re a boxer who just got hit with a combination, and we’re stumbling around the ring seeing stars.  January has not been the month we anticipated, not by a long shot… and that leaves us wondering what February may hold.

As of today… February looks promising for snow lovers… but how can you trust it?  Not after what we’ve been through the last 2 months.  We would be nuts to ask you to bank on a major pattern change, that featured a lot of snow and repeated shots of cold air.  Could it happen? … absolutely!  In fact, as of this post, we expect February to be at least near normal cold and snowfall, with a moderate chance to be colder and snowier than average.  But if you wanted to bet on it… we kindly ask you to re-read the last 3 paragraphs and reconsider.

So with that all out of our system… we’ll continue to monitor the progression of this storm.  We continue to thank everyone for their tremendous support, and we hope you have a terrific Thursday!

16 thoughts on “Thursday Discussion : Another One Bites The Dust” 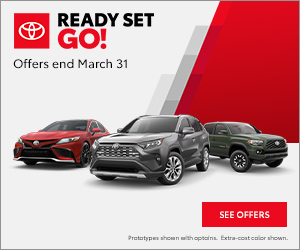