Ever since we turned the calendar to January, things have been rather quiet in the Hudson Valley. 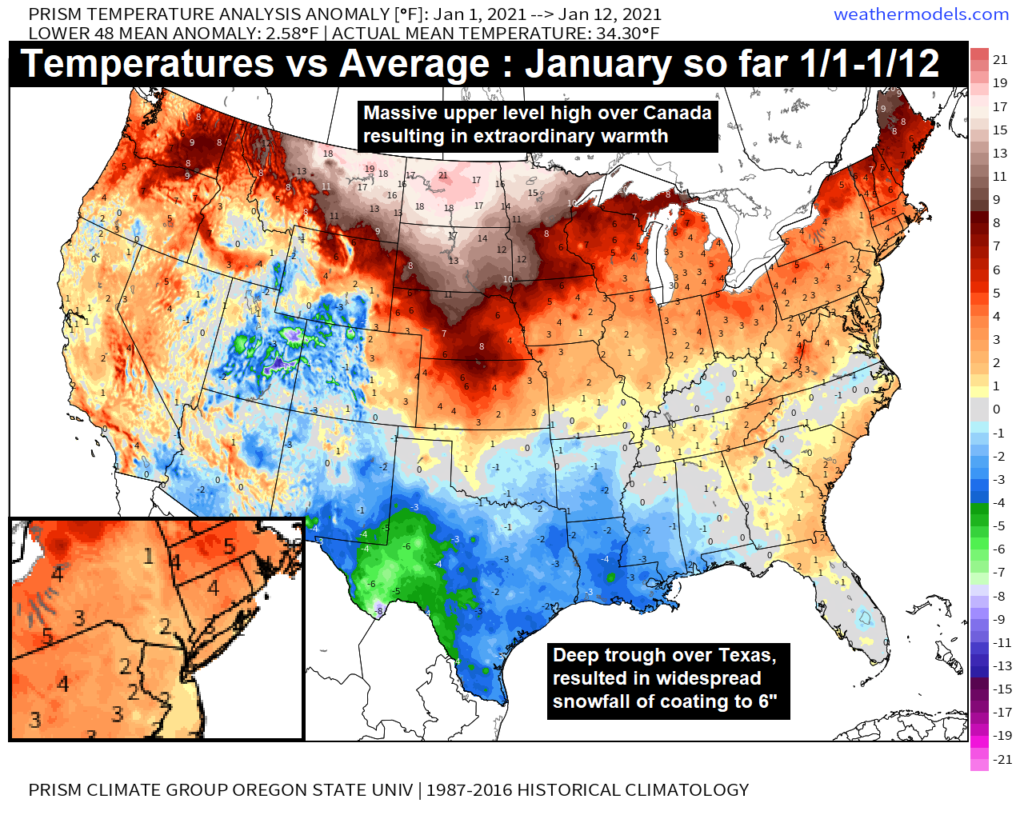 The massive high pressure over Canada has been in place since the start of the new year.  The ridge has resulted in very warm air over the northern half of the US, and especially as you get near the Canadian border.  Temps in Minnesota and North Dakota nearly 15 to 20 degrees above average.  On the flip side, a deep upper level trough led to cold temps in the central US along with snow for much of the northern half of Texas.  But after 12 days… temps for the majority of the country are +/- 3° of average, which is not too terribly extreme.

As we look toward the end of the week, we’ll watch an approaching system to the Great Lakes.  Out ahead of it, it will spread clouds and scattered rain showers into the eastern US.

Friday will be cloudy, with increasing areas of drizzle through the day, as our flow will be moist off the Atlantic Ocean.  By the evening hours, we should see areas of rain showers break out, and last through much of the night.  Scattered showers and spotty downpours are possible.  It will be breezy, but nothing like what we saw on Christmas Eve.  The strongest gust is likely to be in the mid 20mph range.  So while unsettled Friday night, it’s not looking too terribly stormy.

The rain showers will be with us into the morning on Saturday, before things gradually improve for Saturday afternoon and evening.  A breezy second half of the weekend is likely, but there is no blast of arctic air coming behind this system.  So temperatures will remain near to slightly above average in the region into the beginning of next week.

Looking at the longer range…

At the moment, there is no sign of an imminent winter storm threat.  The overall pattern is beginning to look a bit colder by mid week next week, and that could carry into next weekend.  The storm track looks to become more active, which could result in a storm or two developing.  But computer guidance has not been able to see any serious threat of a storm through the next 7 days.  We may have a storm system to contend with next weekend… which depending on the track could be rain or snow.  But as of now… there is no consistent threat appearing on the models.  We’ll continue to watch closely, and let you know if things begin to look a bit more promising.

Have a great Thursday!