A lot of instability over the eastern US has given us some scattered showers and thunderstorms Wednesday afternoon and evening across the Hudson Valley.  That instability will remain in place on Thursday, and could give us some headaches late in the day. 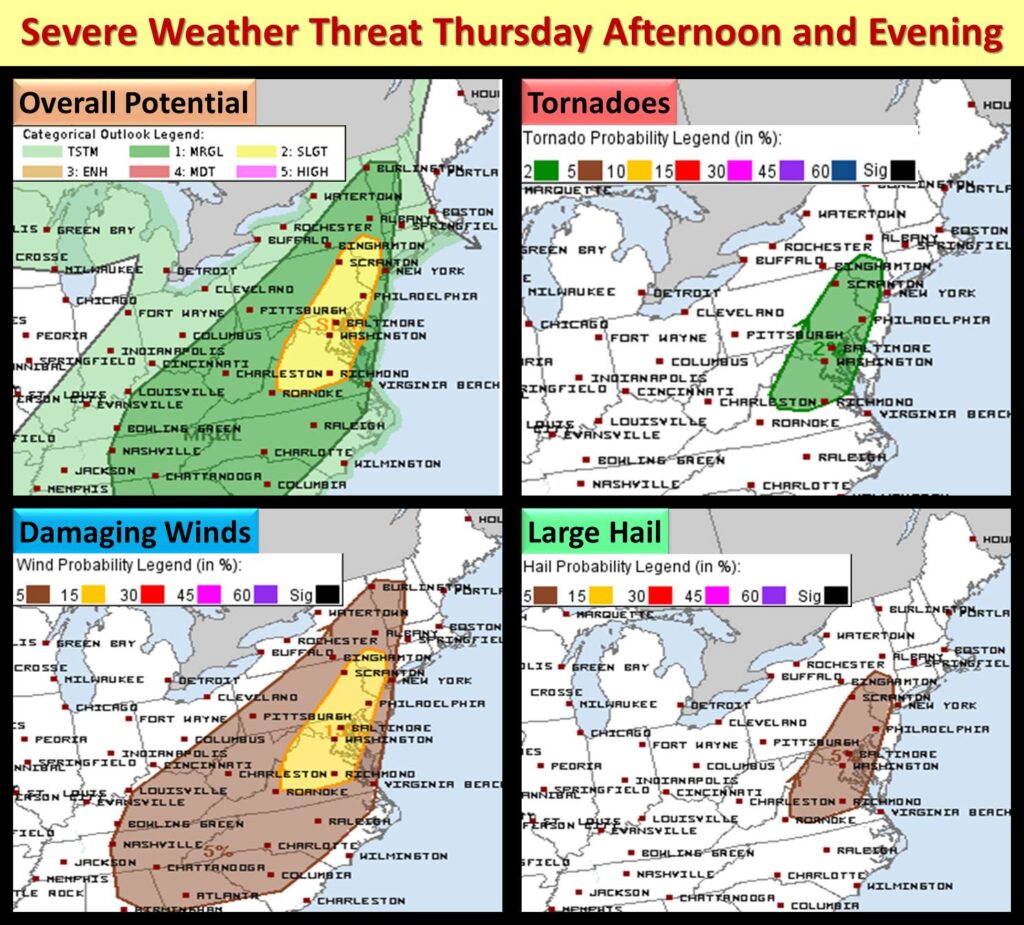 This graphic from the National Weather Service shows an area of severe weather concern from Vermont, extending southward through the Hudson Valley, and on into the southeast US.  A weak upper level trough will push eastward on Thursday, and could touch off some strong to severe thunderstorms as it does.

Timing:  2pm to 8pm… with the highest risk between 5pm and 7pm

However, there is considerable uncertainty about the amount of cloudiness expected in the region.   This is important, because if skies are mainly cloudy on Thursday morning and afternoon… the atmospheric instability will remain low, and greatly reduce the severe weather threat.  As a result, we’re issuing the following StormPact graphic… 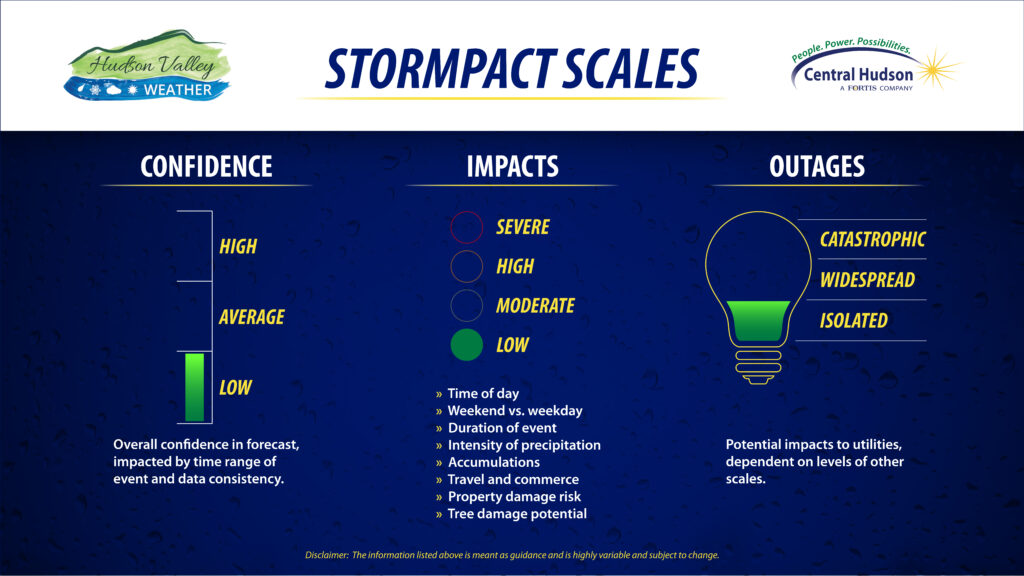 CONFIDENCE : LOW … The low confidence in the event is due to expected mostly/mainly cloudy skies through the morning and early afternoon.  This should limit the potential for severe weather.  If we see more breaks of sun than expected, the chances of severe weather late in the day will increase.

IMPACTS : LOW … The combination of mostly cloudy skies reducing the severe threat, and the low number of scattered thunderstorms should result in a low impact for the Hudson Valley.  Keep in mind, this means one or two severe storms being possible, and the potential damage limited to a few locations.  Should a severe storm form in your location, damaging wind gusts over 50mph are possible.

OUTAGES : ISOLATED … with the potential for severe wind gusts over 50mph expected to be limited to 1 or 2 storm cells, the number of outages should be rather low.

You can see here on the futurecast that the threat does not look all that ominous.  Now, how the showers and thunderstorms actually develop remains to be seen.  It’s possible there could be more thunderstorms than what this guidance is seeing.  However, due to the mainly cloudy skies expected, this particular computer guidance is not all that impressed.  Here is the expected cloud cover through the daytime hours on Thursday…

Simulated Satellite Image : 9am to 6pm on Thursday

You can see the mainly cloudy skies expected until 2 or 3 in the afternoon, at which point some breaks of sun move into the Hudson Valley.  That’s the window for atmospheric instability to increase… and that’s what we need to monitor.  But the mainly cloudy skies shown here would in effect, stabilize the atmosphere over our area, and reduce the severe weather threat.  There is other guidance however, that suggests the storm threat a bit more widespread during the late afternoon hours… but even that guidance does not show a widespread severe weather outbreak.

So while we have low confidence on the cloud cover being able to stabilize the atmosphere on Thursday… we do think the clouds and spotty morning showers will do enough to keep the Hudson Valley only experiencing a low impact severe weather event, with only a few isolated outages expected.  If this changes, we’ll try to update the situation as it develops on Thursday.  Please keep tabs on either our Facebook page or website for updated advisories.