Compared to what some of the computer guidance suggested last weekend… the Hudson Valley will dodge a bullet on Thursday.  But even though we won’t see our first widespread accumulating snowfall… we will still likely see a widespread reminder that if winter is not here… then it surely is not far away.

The arctic boundary is approaching the Hudson Valley as the precipitation moves in from the west.  The timing is close… but not quite where it needs to be for an early November snowstorm in the Hudson Valley.  The light rain showers will fall during the afternoon… becoming a steady rain.  The cold air will cut into the valley, causing temps to tumble through the 40s in the afternoon, and into the 30s by early evening.  You can see the high elevations are the first to transition to wet snow.  Sullivan County and the Catskills should be wet snow by dark… with the wet snow flakes gradually making their way down to the valley (especially in the upper half of the Hudson Valley).

Since timing is absolutely critical… we can’t completely rule out the possibility that a burst of wet snow doesn’t reach the mid and lower Hudson Valley before ending.  So even near the I-84 corridor we could see a slushy coating of wet snow on the grass in spots.  But it’s likely to produce no accumulation in most of the valley areas. 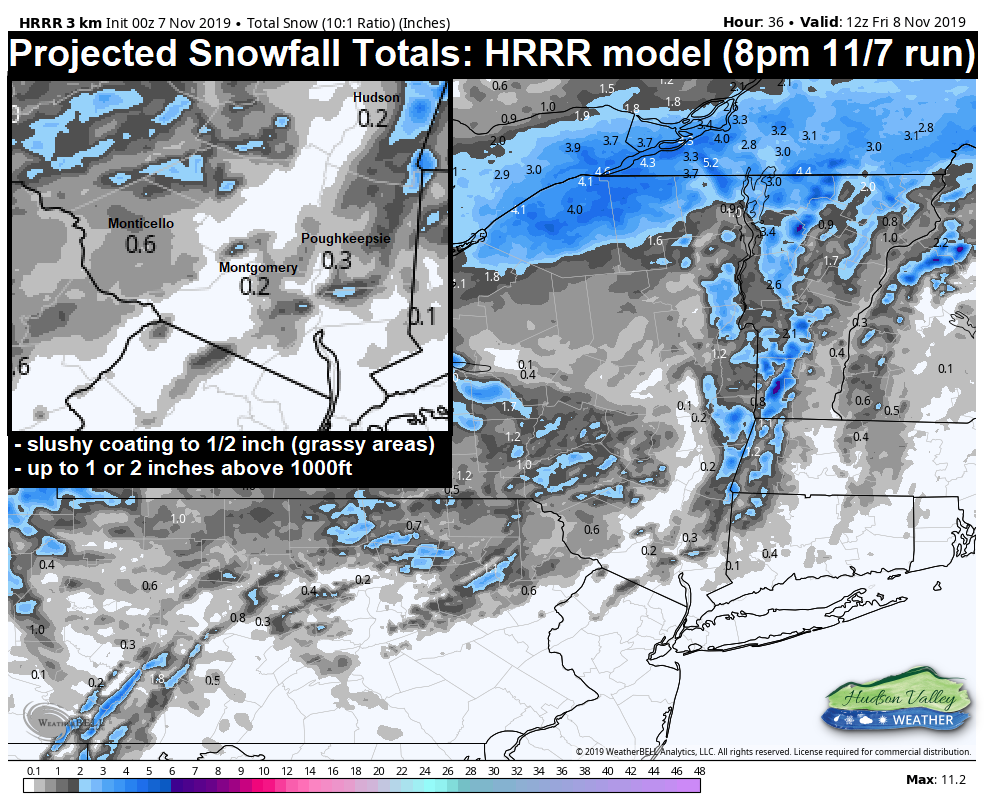 You can see the warmth of early November really prevents any wet snow accumulation in the valleys… and really even away from the valley floor, the wet snow has a problem sticking.  Without a purely wintry air mass in place… it’s extremely challenging to get snow to fall this early in the season.

And so, that’s what we’ll likely see on Thursday afternoon and evening… the battle of the seasons, between an autumn air mass and our first purely wintry airmass of the season.  The wintry air mass will win out… but it should be too little too late for snow lovers.  But fear not… more opportunities are on the way as November continues.