Thursday is the first full day of spring… with Spring officially arrived at 5:58pm on Wednesday.  So it’s rather fitting that the storm system impacting the Hudson Valley on Thursday, will be mainly rain across the region.  However, parts of the Catskills may still feel winter’s icy fingers holding on for dear life.

Daytime Highlights:
– Rain begins 8am to 11am from south to north
– Rain could begin as period of wet snow in Catskills
– Periods of rain showers for entire HV and Catskills thru afternoon
– Period of steady/heavier rain possible near evening
– Temps in low to mid 40s for most areas during afternoon

Nighttime Highlights:
– Colder air tries to filter in after sunset
– Periods of heavier rain… may mix with wet snow in Catskills during evening
– Catskills likely transition to wet snow by midnight
– Valley may mix with wet snow after midnight (depending on cold air)
– Rain/wet snow mix tapers off near sunrise Friday
– Catskills could see slushy 2 to 6 inches in highest elevations
– Valley areas could see slushy coating in spots (mainly northern HV)

The rain will develop in the Hudson Valley from south to north during the morning hours, and be showery in nature.  But as the morning progresses, we should see more widespread steady rain showers expanding across the region.

Futurecast Radar: 6am Thursday thru 6am Friday

You’ll notice on the latest simulation above, that there isn’t much snow to speak of under the latest guidance.  There’s a chance some areas are cold enough to mix with wet snow at the onset… especially in Sullivan County.  But temperatures are projected to warm safely above freezing at all layers of the atmosphere… as might be expected on the first full day of spring.  Temps should climb into the low 40s, even in the lower Catskills… so only the highest peaks will likely mix with wet snow during the daylight hours.

After dark, temperatures should fall a few degrees.  In addition, the low pressure will be closer to the coast.  This will allow portions of the Catskills to begin mixing with wet snow once again.  Even the valley could mix with wet snow after midnight… but no accumulation expected in the valley.  The Catskills could see a slushy couple inches of wet snow, but the exact amount of wet snow will be critically based on the exact amount of cold air available.  This will be next to impossible to predict perfectly… so we’ll have uncertainty on the wet snow amounts in the Catskills, right up until the end of the storm.

As a result, we’ve lowered snowfall amounts on our map.  There is just not enough cold air, for this to be a real winter storm for the majority of the Hudson Valley.  Hope your Thursday gets off to a great start… don’t forget to grab the rain gear and the winter coat. 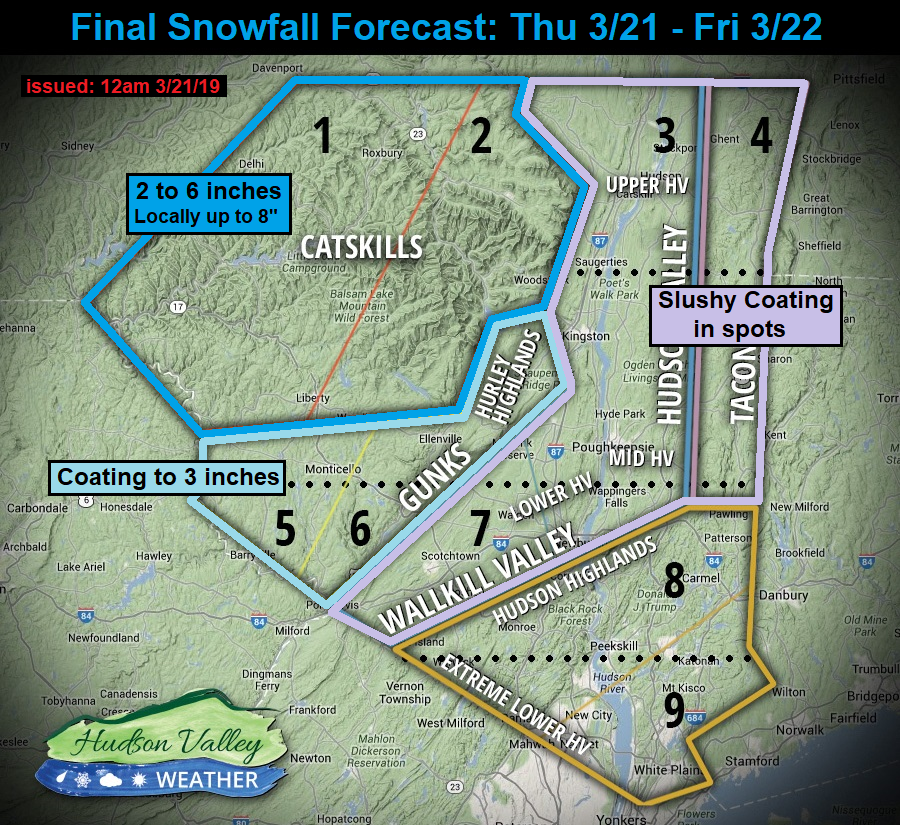