The Hudson Valley does not experience tropical systems directly very often.  That’s a very good thing.  The topography and vegetation in our area are not conductive to sustained strong winds.  If a severe thunderstorm pushes through with 55mph+ wind gusts, that can cause power outages in localized areas.  So it comes as little surprise that with Tropical Storm Isaias left an ugly mark on our region over the past several days.

Reports of well over 300,000 power outages across the region.  Our friends at Central Hudson alone had nearly 115,000 outages… and other suppliers reported over 213,000 outages.  Many of these over 300,000 have been restored.  However, some may not have power restored until after the coming weekend.  That’s the kind of damage we saw in the especially hard hit areas of Orange, Southern Dutchess, Putnam, Rockland, and Westchester counties.

So looking back at the data so far, let’s start with the rainfall amounts, and those amounts were quite substantial… 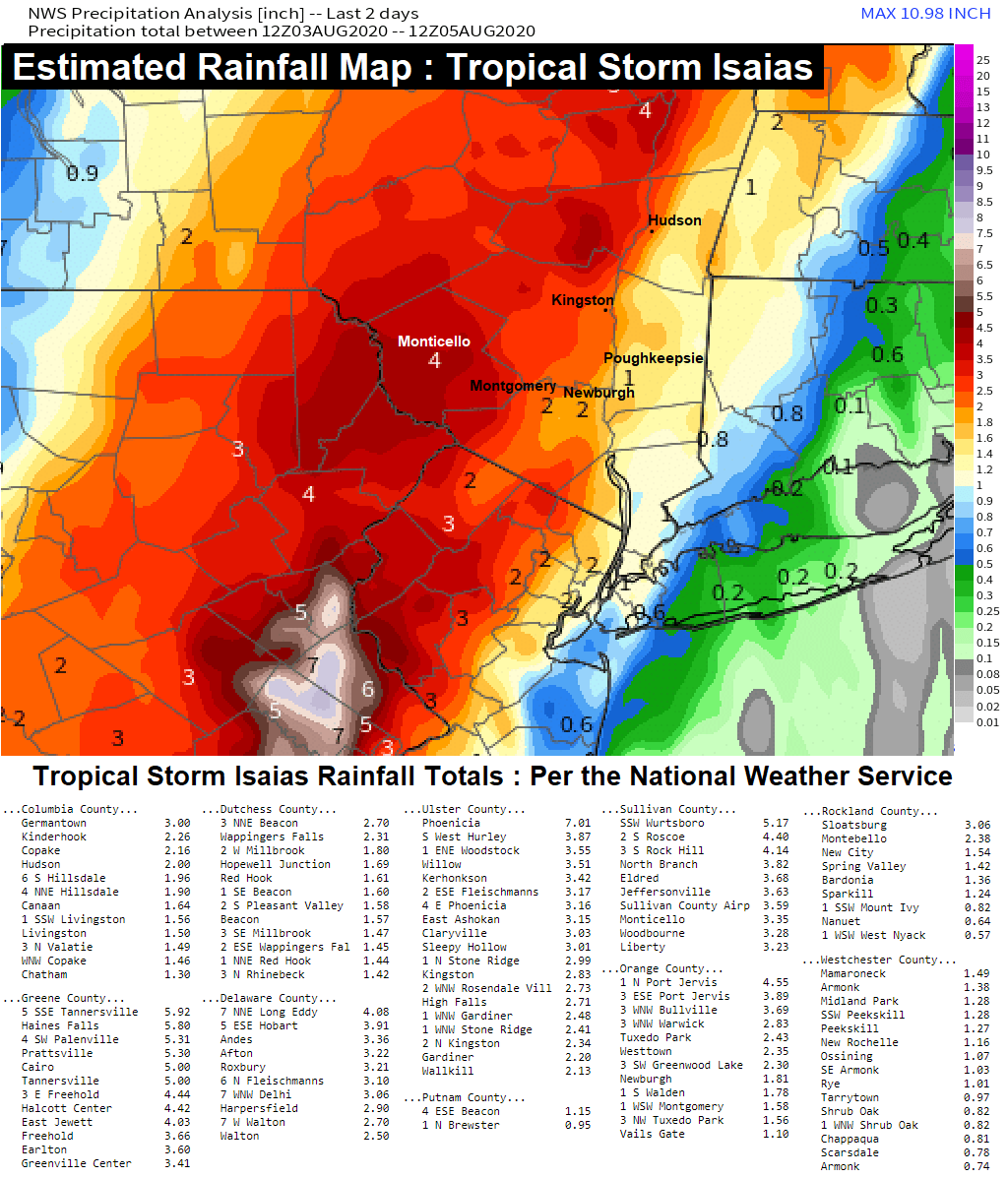 This is a combination of rainfall map and rainfall reports from the National Weather Service.  The totals may be slightly difficult to see, but you can see that the heaviest rainfall amounts were focused in the western HV and Catskills.  This is due to the center of Isaias taking a track roughly from Sullivan County, through western Ulster County, and up into Greene County.  The heaviest rains were on the western half of the storm, and you can see how that played out in reality.  Newburgh only saw 1.81″ of rain on the eastern side of Orange county… while in the western edge of Orange county, Port Jervis saw roughly 4 inches of rain.  Flooding concerns were focused mainly in the Catskills, where some areas saw upwards of 5 or 6 inches of rain in Greene and western Ulster counties.

When we talk about wind gusts… that’s where the bulk of the damage was generated.  We said this storm would have 2 different sides, the side with torrential rains… and the side with potentially damaging wind gusts.  So we just said the heaviest rains were in the Catskills… so that means the worst winds must have been in the SE Hudson Valley.  This wind gust map shows the storm over the course of roughly 6 hours, in 15 minute increments.

The worst gusts start out in Orange, Rockland, Westchester county around 1pm… and push northward into Dutchess by 2pm.  The worst winds are roughly between 2pm and 3:30pm in Dutchess, Putnam and Westchester counties.  The closer to the NY/CT border you go, the worse the winds.  Here are the reported gusts from the NWS: 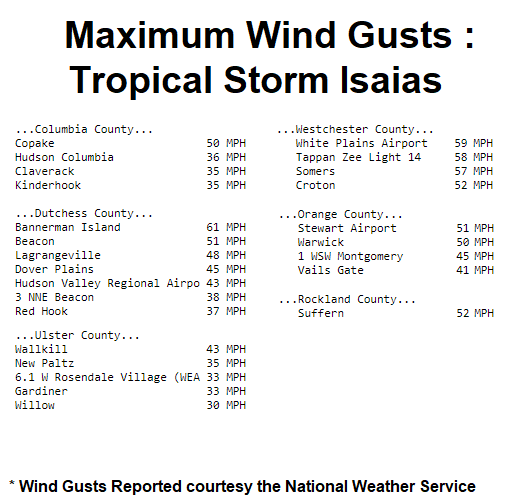 A peak gust of 61mph at Bannerman Island… but multiple reports of wind gusts above 50mph can be found.  The problem is not just the intensity of the peak wind gust… but the fact that gusts between 40mph and 60mph continued for roughly 2 hours in any location.  A strong to severe summer time thunderstorm has gusts of that magnitude for 10 or 15 minutes… the gusts from Isaias lasted nearly 2 hours, and the result was that many of the trees and power lines in the region could not handle the power of the winds.  The end result was what we saw… over 300,000 power outages in our region.

Hopefully in the coming days, we can get the damage cleaned up, and start getting power restored to all of our residents.  For now, please think of your fellow Hudson Valley resident, and lend a helping hand if you can.  We’re tough, Hudson Valley!  We wish you all a safe and healthy remainder of the week.