As we close out 2020, the weather pattern is not looking particularly wintry.  Since having a significant snow event nearly 2 weeks ago, the pattern has shifted into a rather mild pattern once again.  Looking quickly at the long range, it’s rather difficult to find any clear signals for snow.

But the computer models are having considerable trouble with the pattern.  we can tell that because we’re seeing a lot of variability in the models.  Look at the 500mb (Jet Stream) trend over the last 3 days.  The model is forecasting for sunrise on New Year’s Day

Remembering that this is supposed to be the same moment in time… if the model had a good handle on the pattern, all of these images would look the same.  You can see the dramatic shift in the upper level low pressure’s position.  Three days ago, we were thinking that New Year’s Eve would look a lot like Christmas Eve.  Luckily, the pattern projection had shifted considerably, so that a flooding rain and damaging wind gust event is no longer expected.  However, we now have to worry about the potential for a wintry mix on Friday. 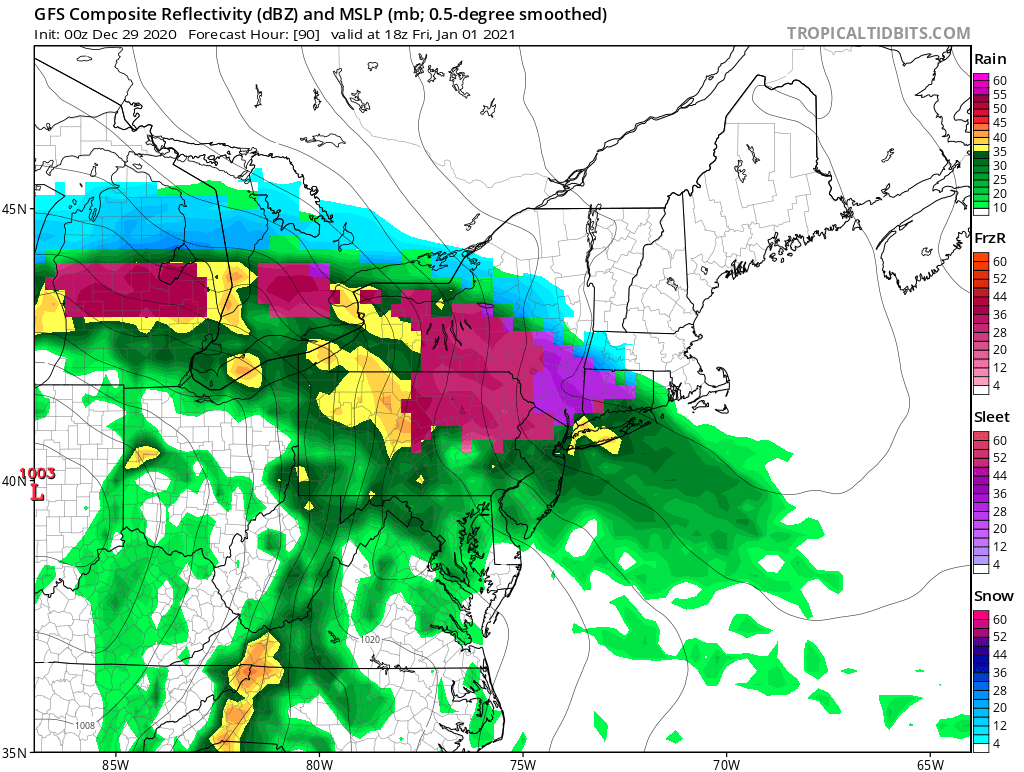 You can see, that instead of temps again near 60° (like the models were showing 3 days ago)… temps are not looking to be in the upper 20s and low 30s, with snow changing to sleet and freezing rain… before eventually a cold rain settles in late on Friday.

Now, things have changed considerably in the last 48 to 72 hours, so we could still see some additional changes in the forecast.  The key is that with models adjusting so dramatically, its safe to expect notable changes to the tail end of the 5 day forecast (day 4 and 5).  There are not significant global indicators with MJO in the null phase (some day we’ll do a detailed explainer on the MJO).  Sparing you the details on what the MJO is… the result of the current MJO pattern, is that the models will likely struggle with the conditions further down stream.  So we’ll likely be seeing a lot of changes to the mid range pattern in the coming days.  When we first looked at Friday before it appeared on the 5 day forecast, it was near 60°… and now we’re talking about a wintry mix possibility just 3 days later.

We’ll likely have more information on Tuesday, regarding timing… and how much ice could fall across parts of the region.  But you can get our latest ideas on the 5 Day Forecast.

Have a great Tuesday!