It’s only mid November, but if you look at the 5 Day Forecast, you might think it was mid January.  As we head into the start of the work week, we’re watching a weak short wave roll through the base of the trough.  As reaches the east coast, the weak low pressure will try to intensify just a bit.  It will be a very close call… and yet another tricky forecast.

So the first thing we’re going to do is take a look at the futurecast radar simulation for Monday afternoon, night, and Tuesday morning.  Then we’ll discuss the possible implications for our forecast.

Impact:
– Hudson Valley split in half… northern half wet snow / southern half mostly rain
– Temperatures at or above freezing: travel troubles mainly after dark
– Must monitor position of rain / snow line, to see if it shifts south

A weak wave of energy will spread light precipitation along the frontal boundary Monday into Tuesday.  Initial concerns were that the boundary would be about 50 miles further south.  In which case, it could have been another 2 to 4 inch event for the majority of the Hudson Valley.  Instead, it looks like an event for the Catskills and our northern Hudson Valley viewers… 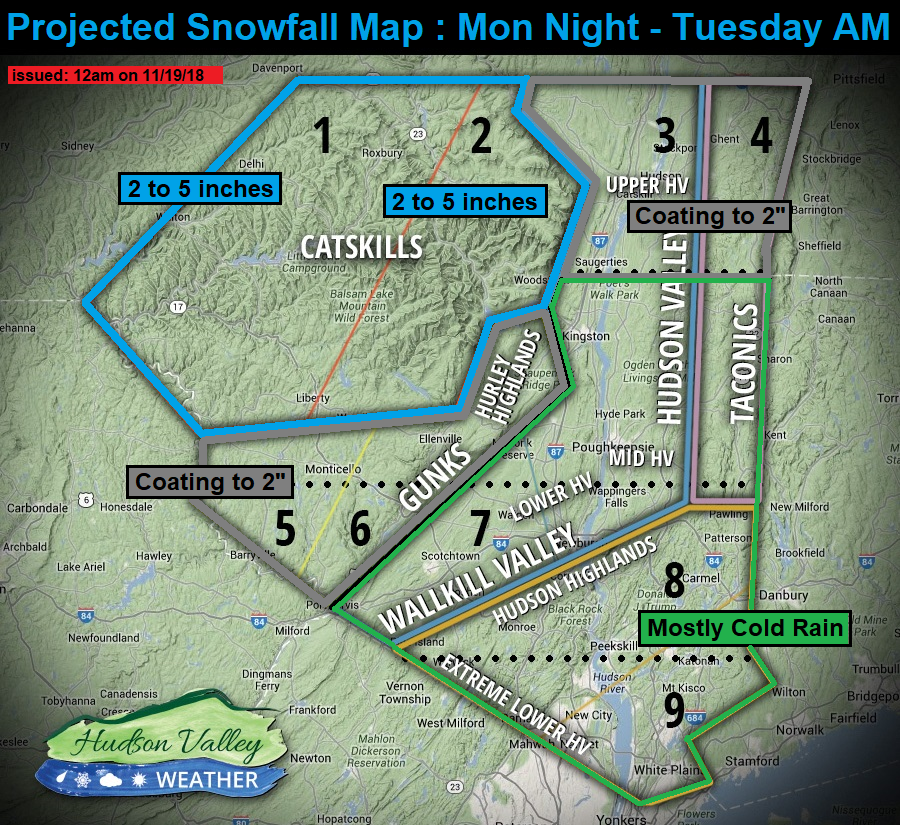 The majority of the Hudson Valley should see mainly a cold light rain.  Some wet snow flakes will surely mix in at times, with temperatures pinned in the mid 30s.  However, as you get into the higher elevations of Sullivan county, and the Shawangunk Mountains, up toward Mohonk… and toward Hurley.  Those areas could see a slushy coating to an inch or two… mainly on grassy surfaces it seems.  The same can be said for areas north of Kingston… mostly the valley portions of Columbia and Greene counties.  As you head further into the Catskills… it will be colder, and the wet snow could add up to another 2 to 4… maybe even 5 inches.

We will need to watch the position of the frontal boundary closely.  If it settles 25 miles further south, we’ll have to adjust our snow totals upward, and include the Mid Hudson Valley.  But the trends we’ve seen indicate this is unlikely.  The trouble with this forecast, is that the 850mb (cloud level) temperatures are at or just above freezing.  The freezing line will set up depending on the frontal boundary… so position is critical to our forecast.

It’s a bit of a tricky disturbance, but it is starting to appear more of a problem for the Catskills and upper Hudson Valley… and a mostly rain event further south.  More updates as necessary…