The frontal boundary has sunk a bit further south around the Hudson Valley, and the result has the chill returning to the Hudson Valley.  After 2 mild early February days, Wednesday looks to be rather chilly, with temps pinned in the mid to upper 30s for highs.  The good news, is with the frontal boundary sinking a bit further south… we should see clouds giving way to a mix with sunshine.  However, our eyes are focused on the returning potential for sleet and freezing rain Wednesday night, and Thursday morning.

Everything moves into the region between 11pm and 1am for most of the Hudson Valley.  Most locations won’t even start as snow, with the exception possibly being the upper Hudson Valley.  But even there, a quick change over to sleet (bright pink) on this futurecast.  The sleet falls for several hours, before mixing with and changing to freezing rain, and eventually a plain rain from south to north.  Here’s a rough timeline:

12am to 6am Thursday
– North of I-84 : Snow to sleet, mixing with freezing rain near sunrise
– I-84 on south : Sleet, changing to freezing rain by sunrise

Impacts:
– Icy roads likely region wide, conditions worst further north
– Temps near or below freezing for AM commute… school delays & cancellations likely
– South of I-84 : icy commute likely, temps likely above freezing by mid morning, travel should improve before noon
– North of I-84 : very icy commute possible, conditions may not improve until mid day, temps need to be watched closely 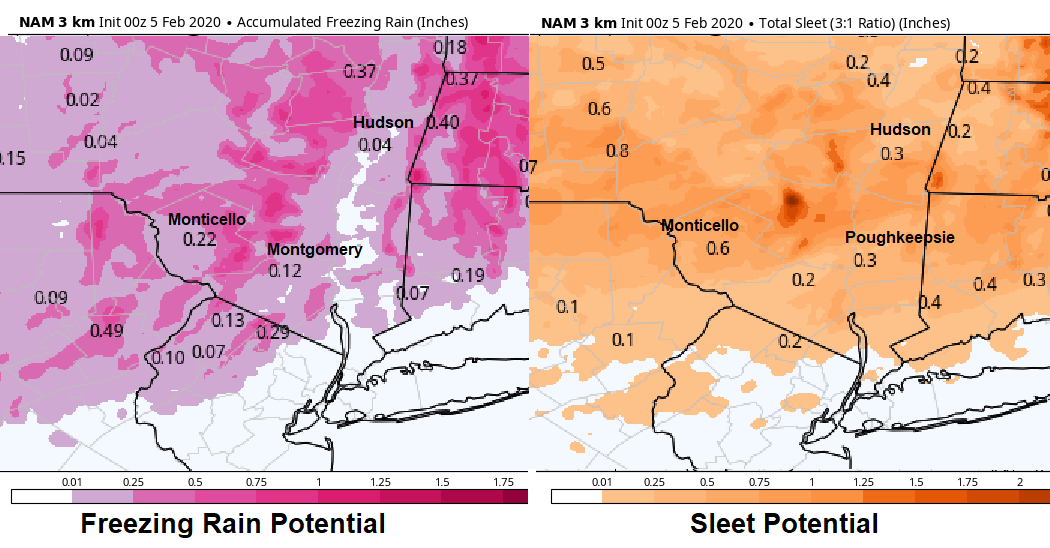 You can see that most areas are expected to see a coating to a 1/4″ of sleet… with areas north of I-84 possibly seeing a half to 1 inch of sleet.  That’s a result of 3 to 6 hours of sleet being possible, before rain falls and freezes on contact for a couple hours.  But notice that temperatures are not that cold in the valley… with areas right along the Hudson River not expecting any freezing rain accumulation.  Temps may be just above 32° in the valley, and could transition straight from sleet to rain in some areas.

Expect that there could be considerable delays and even some cancellations of schools on Thursday.  With not many snow days being used to this point in the season… schools may just opt to take the safe route, and close school… rather than try to wait out the transition to rain that is expected by mid and late morning.  We’ll keep tracking the situation as it gets closer.

Have a nice Wednesday!