After a scorching day on Monday… Tuesday was followed up with a rather warm, sunny summer day.  As we begin our Wednesday… things will start off much the same way Tuesday ended, with sunshine.  But clouds will increase through the day, and by late afternoon… we could see a few scattered showers in the region.

So for the daytime on Wednesday, sunshine fades behind clouds and highs are around 80°.  Then we watch as a disturbance approaches the region from the southwest.  It appears likely to clip the southern Hudson Valley with rain showers by sunset, and those showers could last overnight.  Let’s take a look at the futurecast radar…

You’ll notice that a few spotty showers could reach our area between 4 and 8pm, but they seem very light and very spotty.  Then a more organized batch of rain should approach from the west.  You can see on the futurecast, that the rain area appears likely to focus from the I-84 corridor on south… between 6pm and 6am.

Now any time you have a situation like this, a very minor change in the track of the rain could mean more or less rain across the region.  So everyone should expect the threat for showers… but the odds are highest as you go further south.  Here’s the total projected rainfall… 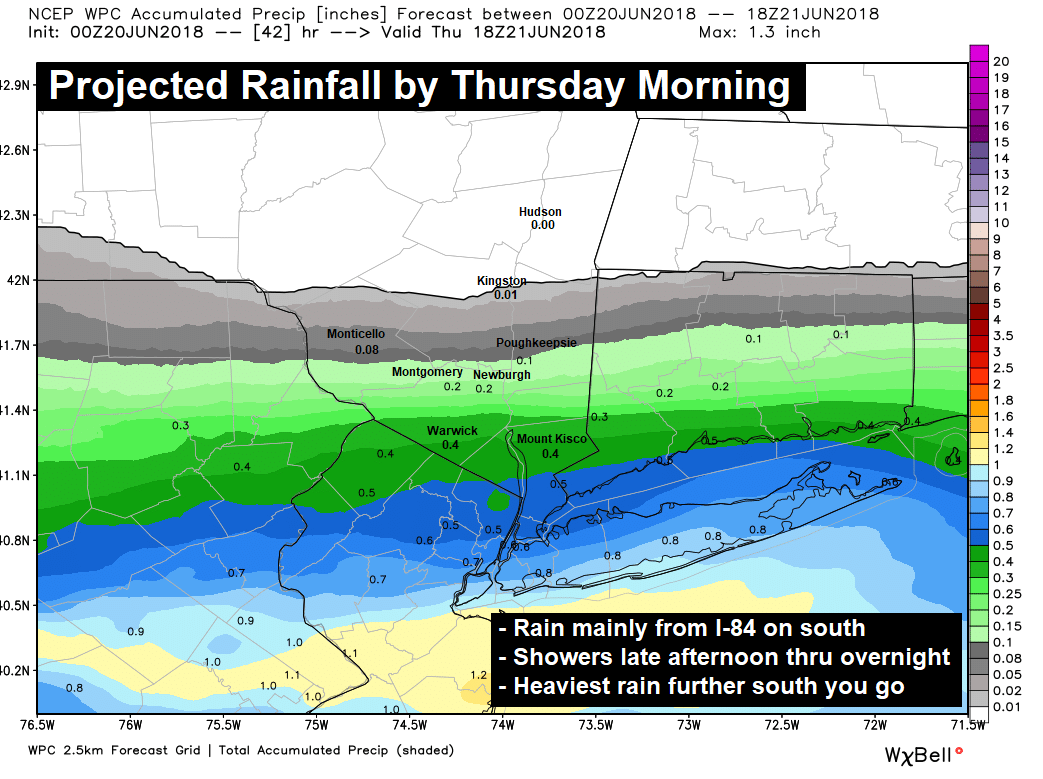 You’ll notice the bulk of the rain is from I-84 on south… with maybe a few sprinkles near Poughkeepsie and Monticello.  So our northern viewers are likely to stay dry… while our southern viewers could pick up a decent amount of rain.

So expect the threat of rain Wednesday night, with things drying out early on Thursday.  Thursday’s weather looks great, and that leads into the weekend… where things become quite unsettled.  Right now, the weekend looks to see scattered showers and thunderstorms… with some more humid air.  The pattern looks a bit tricky… so check back to see if the details change for this coming weekend.