At 5:58pm, spring will officially arrive.  But don’t tell that to Old Man Winter, because he’s going to try and get one last laugh as we officially transition seasons.  Wednesday looks like a fine early spring day… with highs around 50° and some increasing afternoon clouds.  But by Thursday morning, we’ll have a developing low pressure over Virginia, that looks primed to dampen… and possibly even whiten… our Thursday weather. 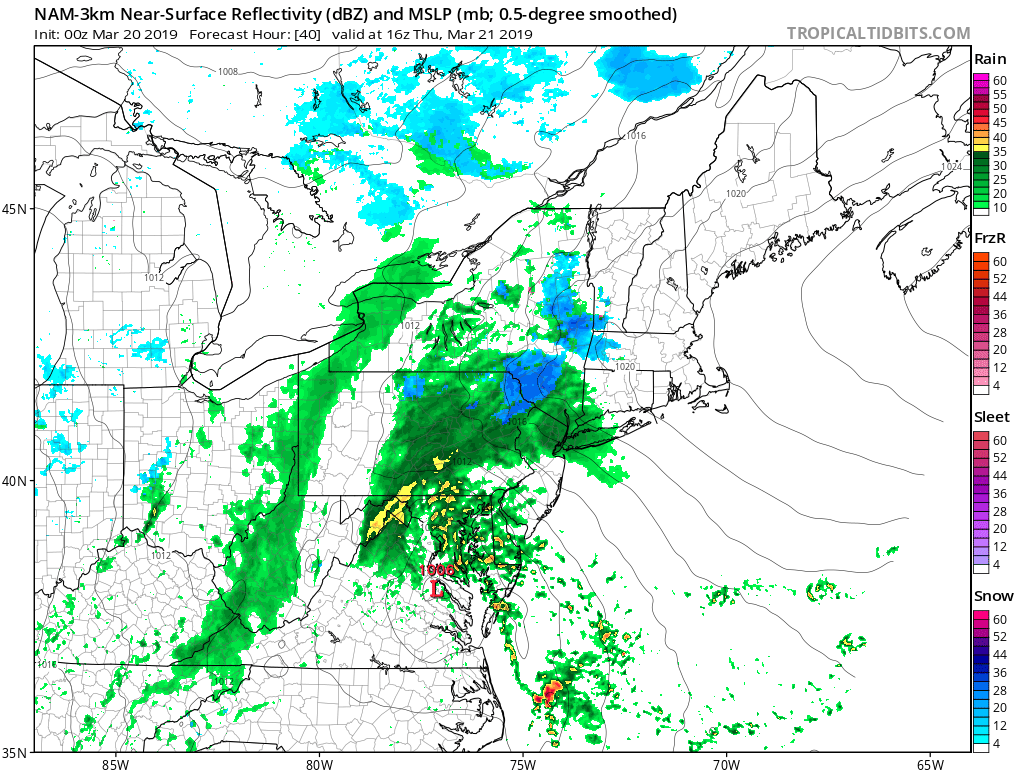 Notice how the low pressure near Richmond, Virginia is inland, and potentially pushing a large swath of moisture north into the Hudson Valley.  Guidance is suggesting that conditions will be cold enough for wet snow in parts of the region, primarily in Sullivan county and western Ulster counties.  The higher elevations should be in the low to mid 30s… cold enough for a slushy accumulation.  However the lower elevations of the Hudson Valley… will likely be in the mid to upper 30s, meaning a cold rain appears likely for most.

It’s important to state clearly… that a minor shift in the position and track of this system, could mean more or less cold air available.  If the storm is slightly further east, and stronger… some wet snow could be seen in the lower elevations of the Hudson Valley.  But as it stands, it appears likely to be a cold rain below 1000 feet.  In fact, depending on the details, it’s possible the 2nd round of precipitation is rain even in the Catskills… if this storm tracks as far west as this map below suggests… 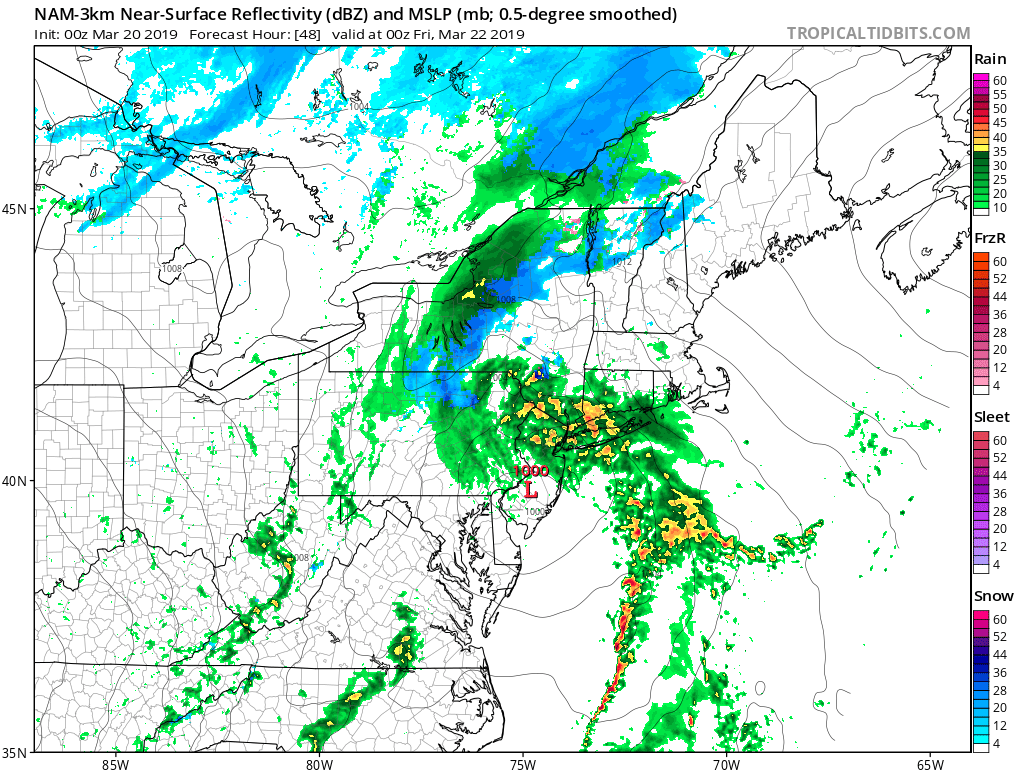 If this storm is 50 miles further east… the snow band that is just northwest of the Catskills on this map, could shift into the Mid/Upper Hudson Valley and Catskills… we’ll have to monitor it closely.  But for now, it appears as if the Catskills will be the only area to see any accumulating snowfall from this late season coastal storm… 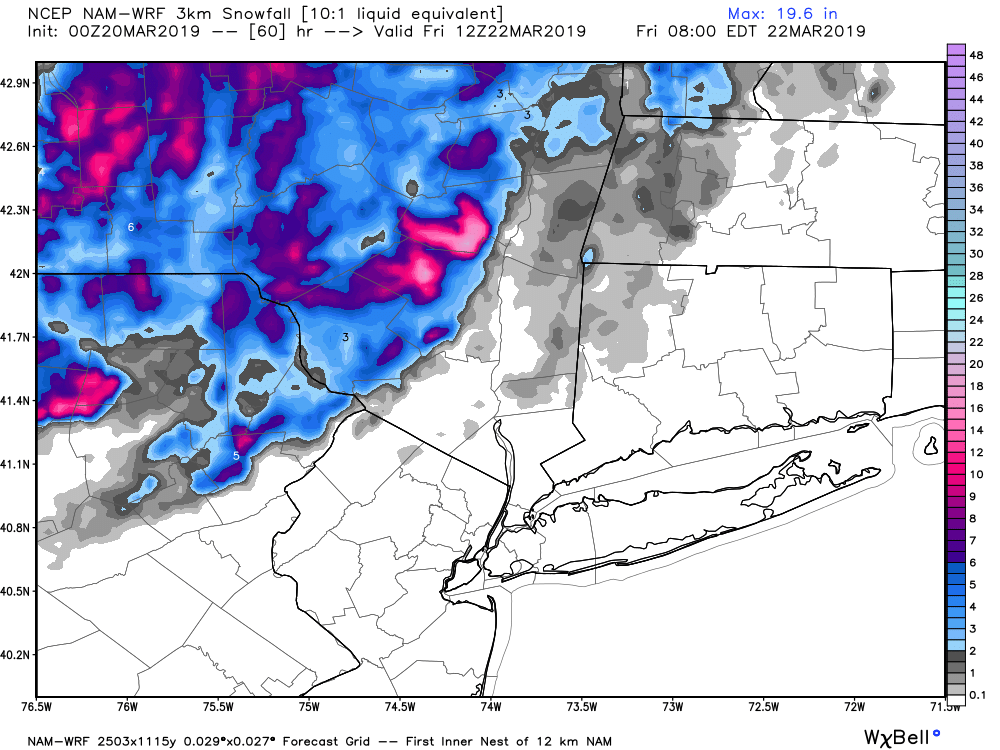 The valley is likely to see a cold rain, possibly mixed with wet snow flakes at times… but no accumulation.  So we’ll have to keep a close eye, to see if the details change on Wednesday.  But for now, this is our preliminary snowfall forecast: 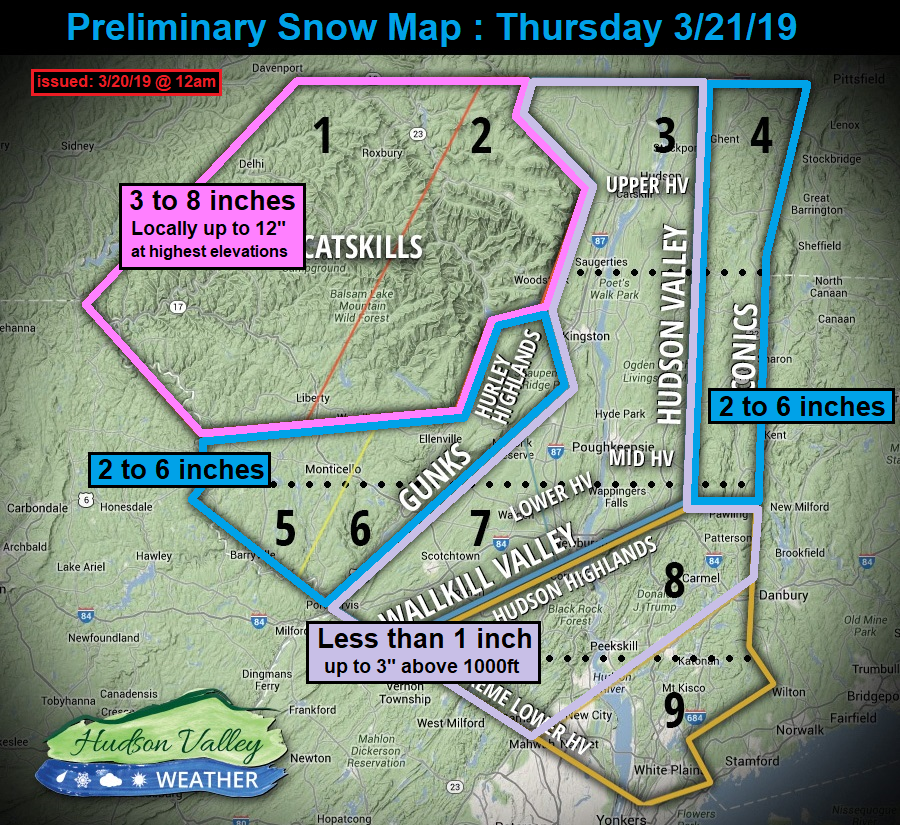 The best chance for accumulating wet snow, is as you go up in elevation.  So a slushy 3 to 8 inches can’t be ruled out in Sullivan, W. Ulster, W. Greene and Delaware counties.  Heading down the mountain a bit, a slushy couple inches is likely for places like Monticello.  Head all the way down below 1000 feet, and it’s likely a cold rain… with some wet snow flakes mixing in.

If anything changes, we’ll share the details on Wednesday.  Otherwise, just a reminder that winter isn’t going quietly… and that we’ve got to pay close attention.  Thanks for all the continued support!