Our weekend weather appears rather quiet.  Some standard summer weather to open the first few days of August.  Nothing that should have major impacts on your weekend plans. 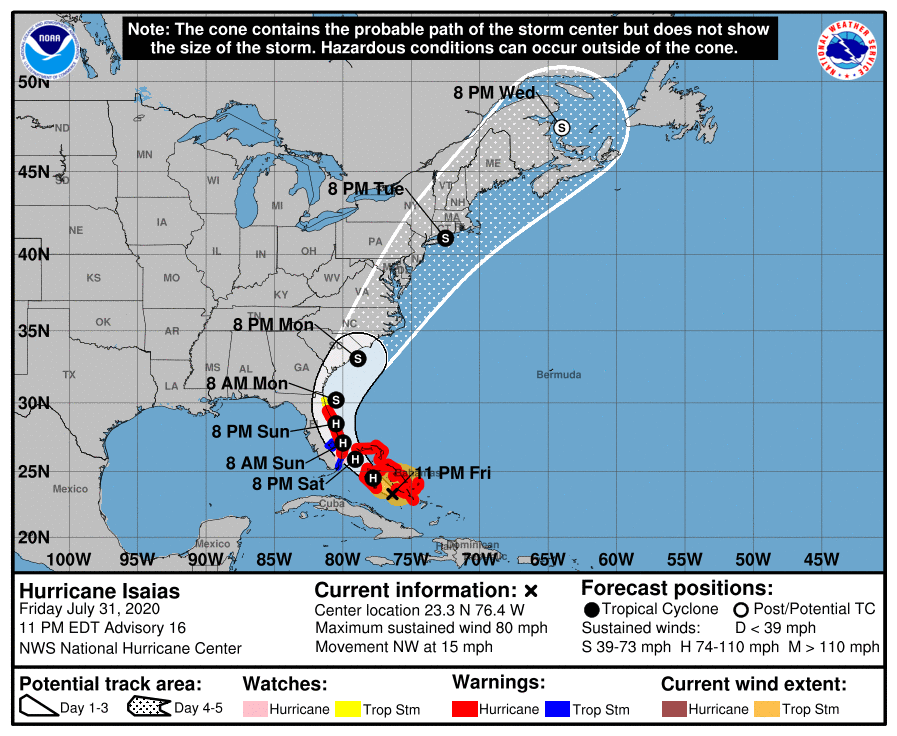 So as we turn the calendar to August in the Hudson Valley, it’s the tropics that will grab our local attention.  On Friday, Hurricane Isaias formed in the Caribbean, and as you can see by the 11pm Friday advisory… it’s got the eastern US within its sights.  The ‘cone of uncertainty’ with Isaias is relatively narrow… which means that we have a fairly good idea of what to expect with the track. 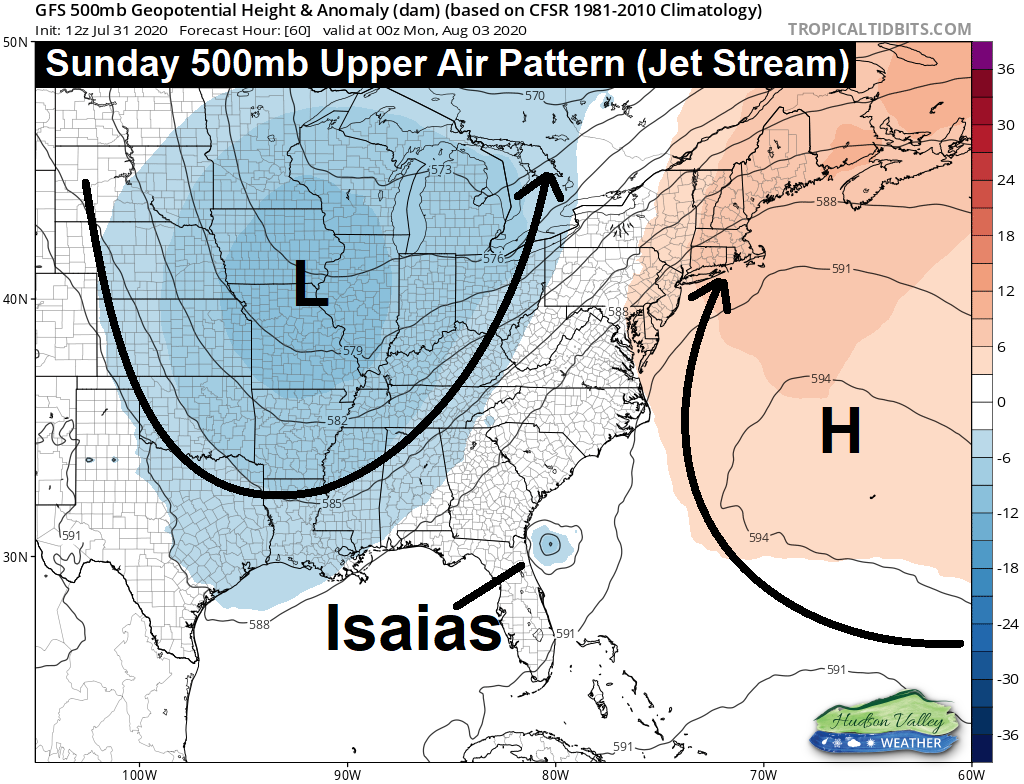 You’ll easily notice the upper air pattern provides a path right up the eastern seaboard for Isaias.  An approaching upper level trough will push toward the east coast ahead of Isaias.  At the same time, a large upper level ridge over the Atlantic will be sliding further east.  The area between the two features will be where Isaias makes it’s path.  The biggest uncertainty, is exactly where these features shown above are positioned.  This will mean the difference of a few hundred miles in the track, and the position of the heaviest rains in the coming days.

As it stands right now, this could be the rainfall scenario for the Hudson Valley between Monday and Wednesday… 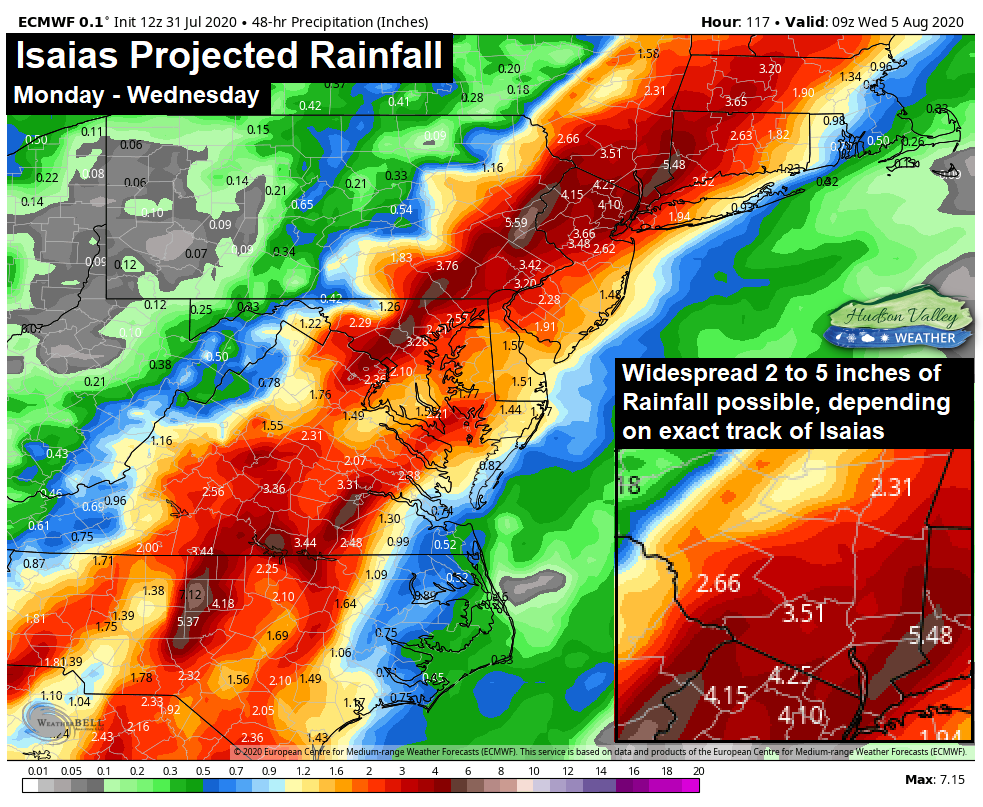 A period of rain and thunderstorms could develop out ahead of Isaias on Monday, followed by the remnants of Hurricane Isaias on Tuesday.  All told, 2 to 5 inches or rainfall could be possible… with localized amounts over 6″.  The key to everything, is the track.  Which we just mentioned could shift a couple hundred miles either way as it moves up the east coast.  You’ll see in the graphic above, the rainfall swath is now extremely wide… so the amount of projected rainfall is dependent on the path of Isaias.  For that reason, you’ll want to keep an eye on the forecast as we are able to focus in on the details a bit better.

Finally, just to bring some piece of mind to some of you.  Any time we are talking about a tropical storm, one of the first things some people think of, is wind damage.  For the Hudson Valley, Isaias does not present a major concern with regard to wind. 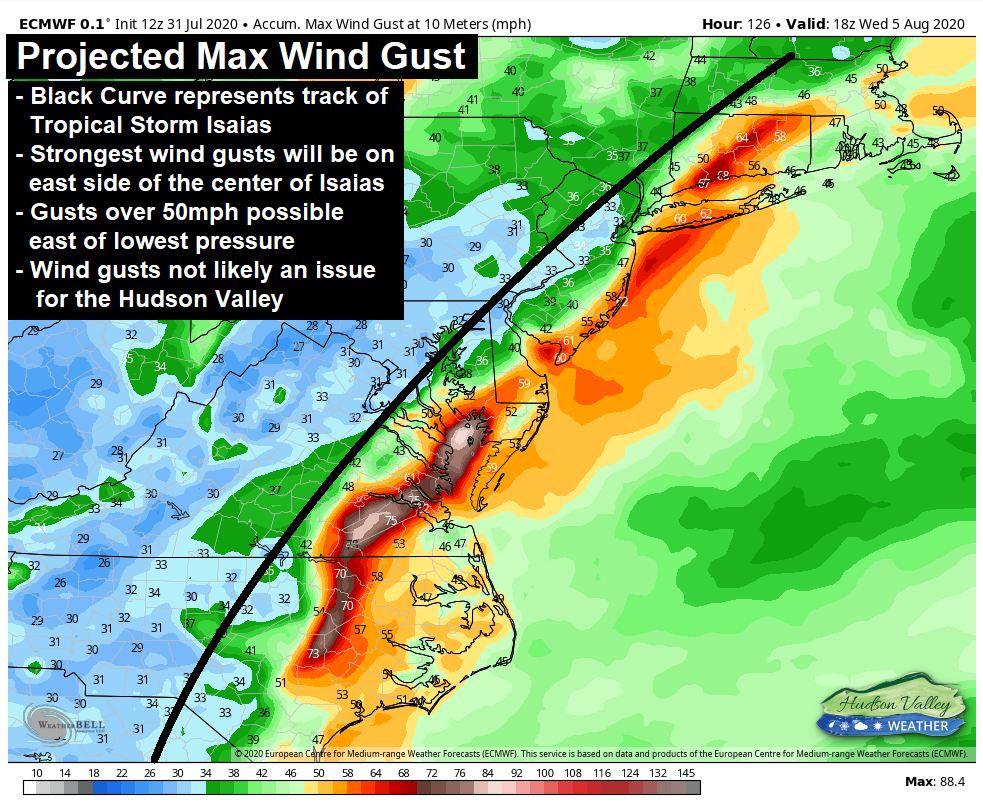 This map shows the maximum wind gusts up and down the east coast from what would be Tropical Storm Isaias.  There are a few hurricane force gusts into parts of Virginia and North Carolina… but further north, gusts up to 50 or 60 mph are possible.  The black curve represents the track Isaias takes on this solution.  This is probably about as far west as Isaias is expected to track (but once again, we need to monitor it closely).  Notice how the strongest wind gusts are to the east of the center of circulation.  So unless Isaias were to take a track even further inland (which the cone of uncertainty suggests is not likely), the strongest wind gusts over 35mph, would be east of our area… mainly over Connecticut and Long Island.  So as you can see, wind damage is not the real concern at this moment… it’s rainfall.

But as always with a situation like this, the details should come into clearer view as we get closer to the event.  Be sure to check back for updates as we get closer.  Have a great weekend!