December has been busy, with the storm track becoming very active.  Fortunately, or unfortunately, depending on your perspective… there wasn’t enough cold air this time for a snowstorm in the Hudson Valley.  That has provided us with a mild and damp Saturday around the region.  But the buzz around the Hudson Valley has turned to our next storm potential, which is Monday night and Tuesday.

A storm will develop over the lower plains states, and begin to track east/northeast into the Tennessee Valley.  It will push warmer air northeastward, and with cold air in place over the Hudson Valley, it will spread precipitation into the northeast US. 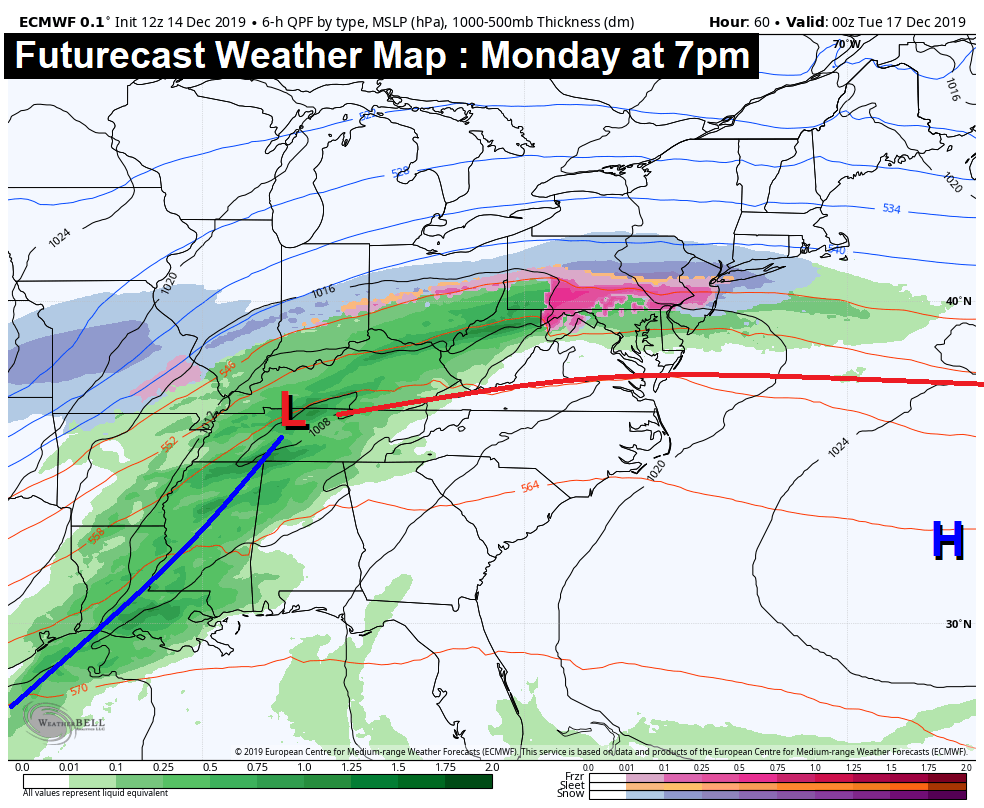 This simulation from the European model, suggests snow trying to develop just after sunset Monday evening.  The snow likely will push from SW to NE through the region between 6pm and midnight.  The question is just how far NE the low pressure tracks, and in turn, how far north the warm air aloft tracks.  There is no strong High pressure over New England to hold the cold air in aloft… so this storm is likely to see a transition from snow, to sleet and freezing rain across the Hudson Valley.

Under this scenario, snow breaks out, quickly followed by a changeover to wintry mix for the southern half of the Hudson Valley.  A snowy Monday night, followed by an icy Tuesday morning.  So as you can see, a slight jog north or south in the storm track… could mean a mostly snow storm, or a storm featuring hardly any snow across the region.  So here are our first ideas on this system…

First Look at Monday Night – Tuesday Storm
– Snow develops near sunset Monday evening from south to north
– Snow mixes and changes to sleet & freezing rain overnight (earlier south of I-84, later further north)
– Wintry mix continues through Tuesday morning, treacherous Tue AM commute likely
– I-84 on south: 1 to 3 inches of snow followed by extended period of freezing rain (up to .25″ of ice)
– North of I-84: 2 to 5 inches of snow followed by freezing rain and sleet (up to .25″ of ice)

If this freezing rain becomes a more serious concern, we will let you know.  For now, it does not seem to be a major ice event… but that could change.  Ice accretion can cause power outages due to accumulation on powerlines and tree branches, so it’s something we are watching closely.  At the moment, it appears that while the period of freezing rain could be long in duration, the precipitation amounts do not seem to be extreme during that time.

Clearly, we are hoping for a trend further south.  With this storm almost 3 full days away… we do have time to see a trend a bit further south, which would mean more snow… and less ice.  But these are our “first thoughts” on this storm.  We should have a preliminary storm forecast out late tonight, or early on Sunday.  Thanks for your continued support!

12 thoughts on “Weekend Discussion : Eyes on the Next Storm”