Wow… what a start to the 18-19 winter season!  Our first winter storm system slammed the Hudson Valley Thursday afternoon and evening, and lingered into Friday morning.  The impacts across the region were very significant, causing some parts of the area to be crippled in terms of the Thursday PM commute.  So we’re going to go through this storm in detail, and discuss how our 1st storm of the season caused so much distress on the Hudson Valley.

To begin, lets compare the forecast against what happened.  Below are:
1.  HVW Final Snowfall forecast
2.  The Snow History map… a visual representation of what actually occurred
3.  The Final Snow Reports… from the National Weather Service 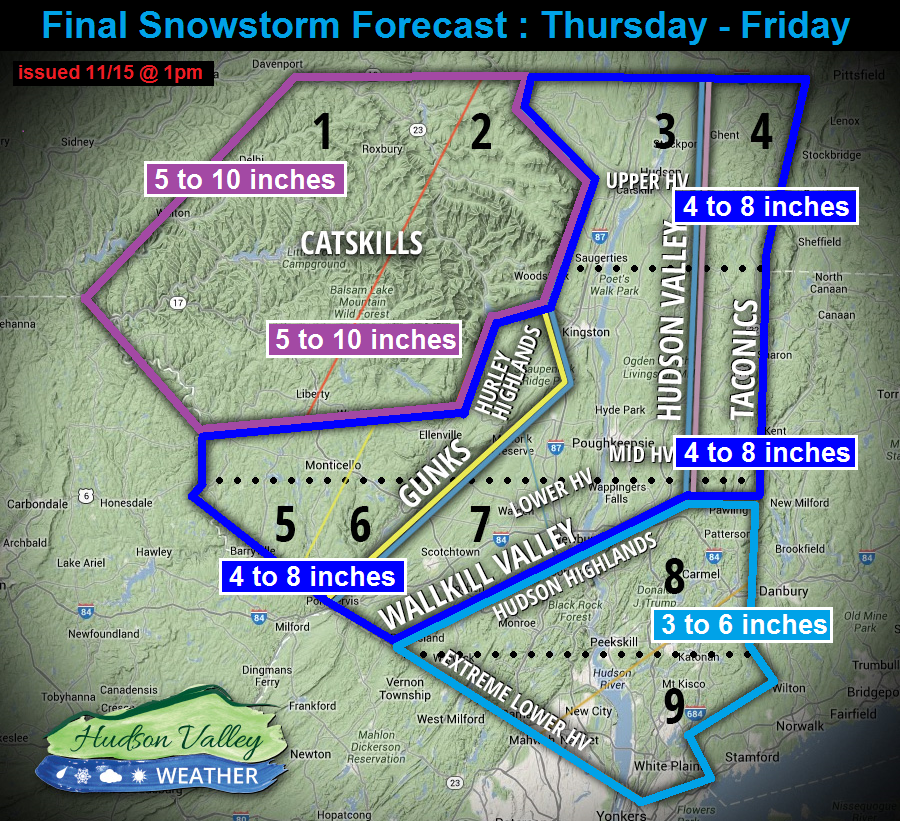 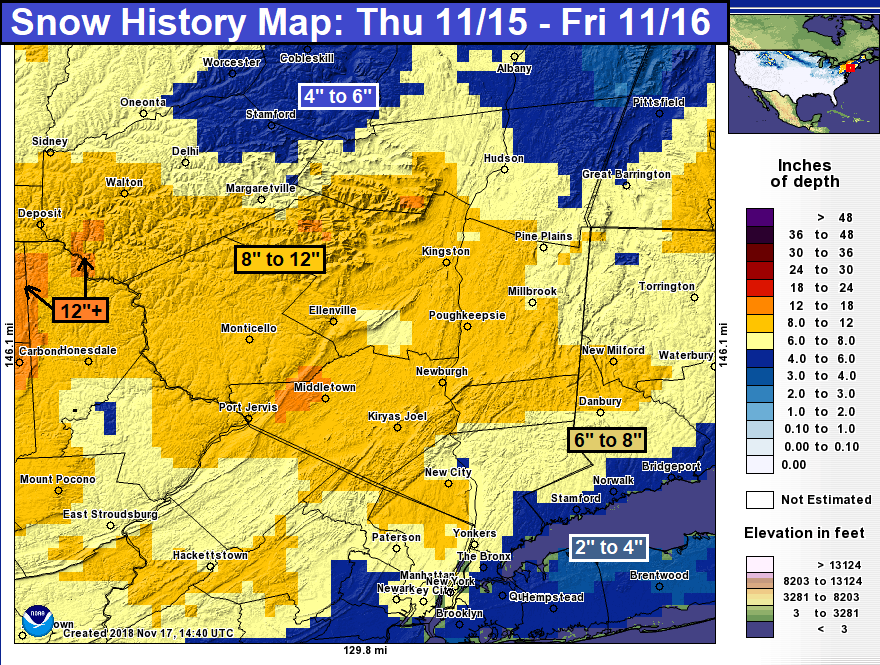 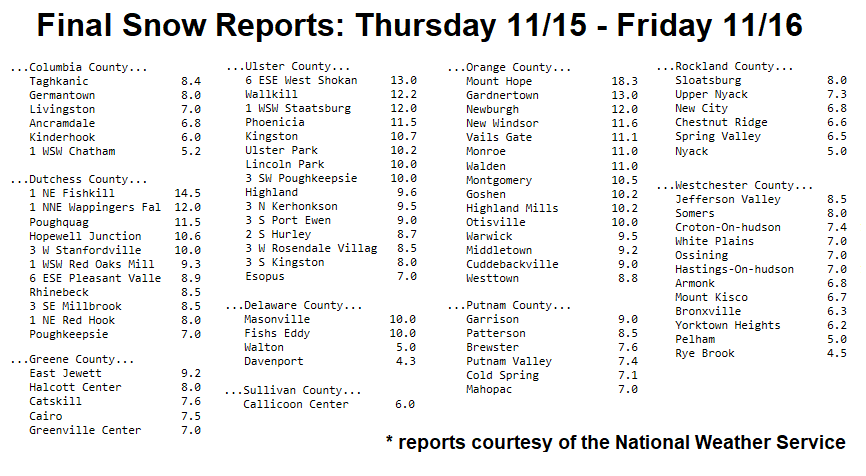 The primary criticism that was echoed from the general population across not only the Hudson Valley, but the greater Tri-state area, including NYC… was that nobody was forecasting this much snow, and that “we were completely unprepared”.   There was a widespread feeling about being caught off guard.

So how about our snow totals, where did they stand?  If we break down our forecast into the 3 different forecast ranges [5″-10″, 4″-8″ & 3″-6″], and compare to what actually occurred, how did it compare?  To do this, we try to quantify how much of the area fell within the forecast, and how many areas were outside the forecast range.  Then we will assess the result of our forecast accounting for only the snow totals (not addressing timing or impact).

So after looking at the details… the area that saw the greatest difference between the forecast and the result, was the Mid Hudson Valley.  We expected widespread 4 to 8 inches in that area… but saw widespread 8 to 12 inches instead.  A lot has been made of this… probably more than would be made if it was the middle of winter.  Because this was the first storm of the year, and because of the impact on the PM commute, there has been extra frustration around forecasts on this storm.

So why were the totals higher than our forecast?  There were two major reasons, in all actuality… and they’re both related to the same root cause.  Quite simply… it was colder than the computer models projected.  It’s just that simple, and it played out in 2 ways. 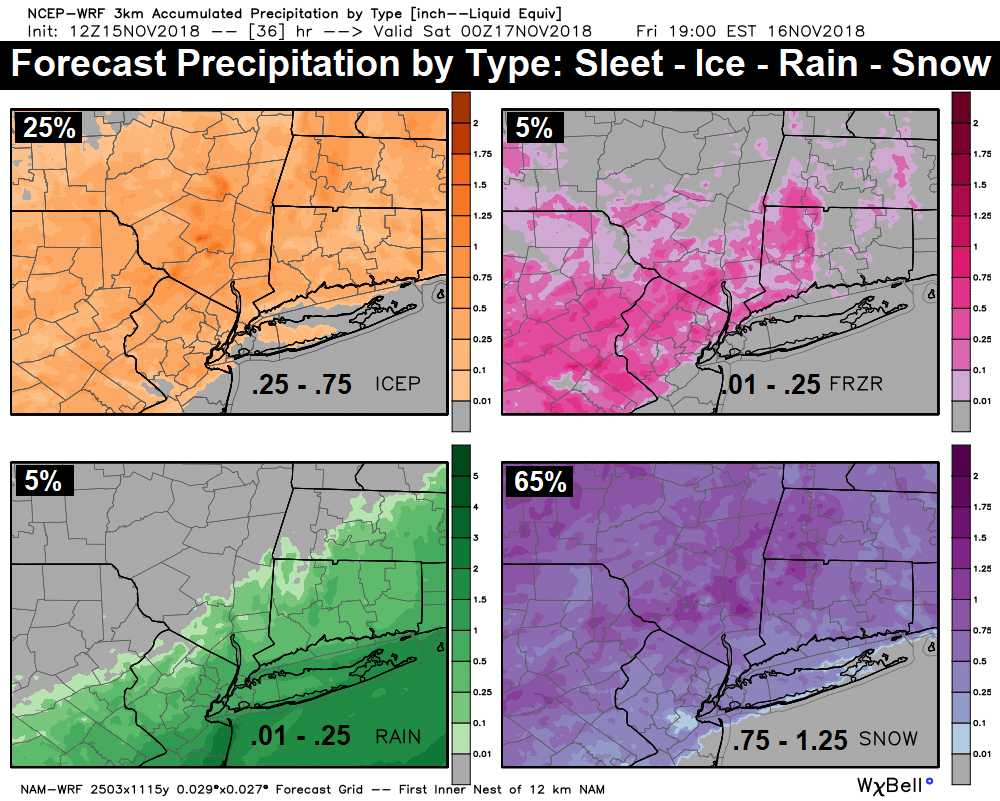 The computer models projected the wintry mix to kick in a little earlier (roughly 65-70% of the storm being snow), which would have kept snow totals a couple inches lower, with a bit more sleet and ice on top of the snow.

In total, the forecast was really quite good.  The specific snow amounts may have been 2 to 4 inches higher than forecast in the Mid Hudson Valley… but the impacts we highlighted in the forecast were precisely accurate.  In EVERY text discussion, Facebook Live stream, and radio broadcast discussion we did… we highlighted just how horrible the commute would become.  We spotlighted the trifecta of factors…
1.  First snow of the season
2.  Just in time for PM commute
3.  Intense snowfall rates of 1 to 2 inches per hour

We explained that the very cold conditions would lead to instant accumulations on all surfaces… something that is very abnormal for mid-November.  We explained that the timing could not be worse.  Snowfall rates of 1 to 2 inches per hour, starting between 3pm and 5pm, would lead to conditions being fine one moment… and being extremely treacherous 30 minutes later.  Then factor in that it’s the 1st storm of the season… and it was a recipe for disaster.

If this sounds defensive, it’s not meant to… but it’s meant to be an explainer.  There has been a lot of finger pointing by people in charge, especially in the NYC/NJ area.  The conditions in and around NYC were exceptionally horrible, with major roads at a standstill for hours.  Even locally, reports of 30 minute commutes taking between 2 and 3 hours to travel, had residents furious.  Blame was being placed on local municipalities for not doing an adequate job, for not keeping the roads passable.  That there is no excuse in the northeast for roads becoming parking lots… and people being stranded for hours on the roadways.

The unpopular fact of the matter is… this is what happens when it snows at 1 to 3 inches per hour, for 3 to 4 hours.  Even if road crews had every truck on the road working as efficiently as possible… it is impossible to keep up with those snowfall rates.  This is why we explained repeatedly how truly horrendous the PM commute would be, and to get to your destination before it started.  There were far too many people on the roads, for the type of weather that was occurring.

Hopefully this event will be used as a teaching moment.  Pointing fingers and shirking responsibility won’t help make sure it doesn’t happen again in the future.  We’ll work extra hard to make sure that we get the details as precise as possible, to provide the best information for planning, and keeping people safe.  We’re not always going to get every detail correct, but we can promise you that the difference between 6″ and 10″ was not what caused the problems we saw around the Tri-State.  Thanks for reading… and thanks for all your continued support!